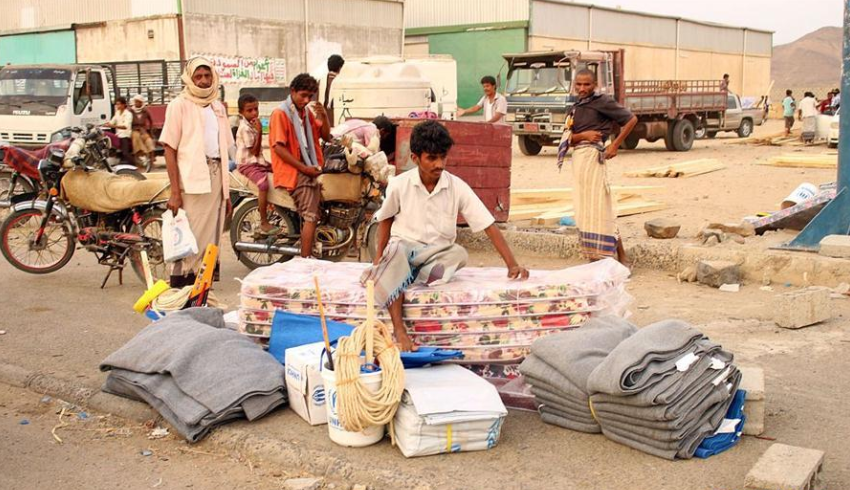 UNITED NATIONS, April 16 (Xinhua) -- UN Undersecretary-General for Humanitarian Affairs Mark Lowcock warned on Thursday that the world body will have to close 31 of its 41 aid programs in Yemen in a few weeks as a result of lack of funds.

"This means we will have to start eliminating many of the activities that may offer Yemenis' best chance to avoid COVID-19," Lowcock told the Security Council in a virtual briefing.

The UN Children's Fund will have to stop immediate assistance for families displaced by conflict or natural disasters. That means up to 1 million displaced people would not receive critical supplies, including hygiene items that help protect against diseases like cholera and COVID-19, he said.

Nutrition programs will also be cut, affecting 260,000 severely malnourished children and 2 million more children with moderate malnutrition. These children's immune systems will be weakened, making them much more vulnerable to COVID-19, cholera and other diseases, he warned.

People who do fall sick are likely to find fewer clinics to help them. The World Health Organization estimates that 80 percent of health services provided through the response could stop at the end of April, said Lowcock.

"This could mean disbanding local health teams that have been essential in detecting and containing past disease outbreaks. We need these teams more than ever -- not just to keep on top of COVID-19, but to contain a growing risk that cholera will rebound as the rainy season starts."

UN agencies estimate they need more than 900 million U.S. dollars to carry them through July for Yemen, he said.

He thanked Saudi Arabia for its pledge last week of 500 million dollars for the UN-led response and 25 million dollars for COVID-19 activities. He expressed the hope that these funds can be quickly disbursed so that the programs at risk can continue.

So far, the United Nations has received about 800 million dollars in pledges and contributions for the response in Yemen this year, compared with 2.6 billion dollars at this time last year, said Lowcock. "So I am urging all donors to pledge generously now and immediately release at least enough money to cover response operations through July. For operations beyond July, we understand some donors may choose to disburse the remainder of their pledges only after observing future developments."

Despite conditions on the ground, and the real threat to UN staff's safety and health, humanitarians are staying in Yemen and delivering. Some international staff were rotated outside Yemen when the airports closed several weeks ago. The rest remain in country and are working with their Yemeni colleagues to deliver critical aid programs during this difficult time, said Lowcock. "We have enough staff in the country to deliver critical programs. What we don't have is the money."

The humanitarian operation remains a lifeline for millions of Yemenis. Every month, more than 13 million people across the country get help, he said.

Precautions to reduce the risk of COVID-19 are not slowing down aid operations in a major way. But other restrictions imposed on staff and cargo movements, mostly in the north, continue to constrain humanitarian work, he said.

In the north, access challenges remain severe. Although Houthi authorities have approved 13 aid projects since early March, agencies still have 92 requests pending, including 40 that have been waiting for months to get started, he said.

There are problems in government-held areas as well, including bureaucratic impediments and insecurity. Humanitarian organizations are still waiting for government officials to approve 43 projects that would assist 2.3 million people. Many of those requests have been pending for months, said Lowcock.

Civilian casualties continue to rise, with more than 500 people killed or injured in the first quarter of the year. One in every three civilian casualties has been a child. In Al Jawf, where hostilities escalated in mid-January, that rate is now one in two, said Lowcock.

Since January, at least 60,000 people have fled conflict in Al Jawf and neighboring areas. Most of them have arrived in Marib, where more than 800,000 displaced people have sought refuge since 2016. If conflict expands deeper into Marib, more than 1 million people could suddenly be on the move, he warned.

Lowcock welcomed the recent moves toward a nationwide cease-fire, including the Saudi-led military coalition's announcement of a unilateral cease-fire in Yemen on April 8. "I urge all parties to join this effort, which is urgently needed not just to give Yemen a fighting chance against COVID-19, but to relieve the disproportionate burden of the war on civilians."

The Yemeni government confirmed the first case of COVID-19 in the country on Friday.

More than five years of war have severely degraded Yemen's health infrastructure, exhausted people's immune systems and increased acute vulnerabilities. As a result, epidemiologists warn that COVID-19 in Yemen could spread faster, more widely and with deadlier consequences than in many other countries, said Lowcock. "We are, in other words, running out of time."

Yemen depends almost entirely on imports for supplies. Imports must be purchased in hard currency, which means the government needs foreign exchange to finance them, and people need the Yemeni rial to maintain a reasonable exchange rate to afford those imports, he explained.

The impact of COVID-19 on the global economy will make this more difficult. Oil prices have fallen. Because the government depends on oil as a main source of revenue, officials may soon find it much harder to finance imports, to pay civil servant salaries or support the exchange rate, said Lowcock.

Lowcock asked for bold action to stabilize the economy before it is too late. This should include regular foreign exchange injections that have proved effective in the past, as well as measures to increase quantities of affordable food and other consumer goods in markets across Yemen.

COVID-19 is presenting a unique opportunity to reinvigorate the political process and move toward peace. It is, though, also promising severe repercussions if that does not happen, he warned.