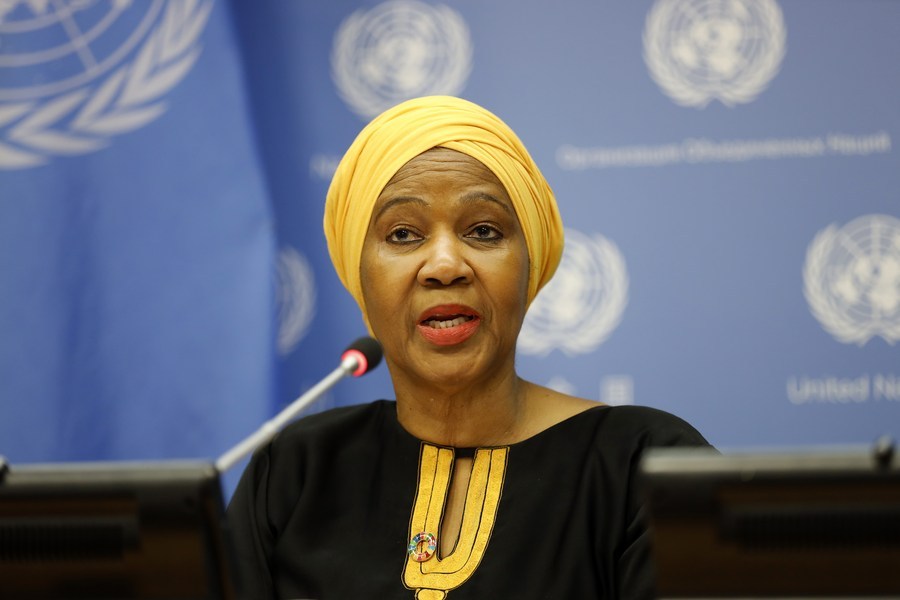 China has created opportunities for women and girls in terms of employment and education, says Phumzile Mlambo-Ngcuka.

UNITED NATIONS, Sept. 26 (Xinhua) -- UN undersecretary-general and executive director of UN Women, Phumzile Mlambo-Ngcuka, has lauded China's achievements in promoting women's rights, and encouraged the country to do even more.

China has created opportunities for women and girls in terms of employment and education, said Mlambo-Ngcuka in an exclusive written interview prior to a high-level UN meeting on the 25th anniversary of the Fourth World Conference on Women in Beijing.

Since 2012, China has lifted approximately 41 million women out of poverty by creating opportunities for income generation and jobs, she said.

Major progress has been made in education parity for girls and young women, with 99.9 percent of primary-school-age girls enrolled in schools, and women accounting for over half of the higher education receivers, while taking up 52.5 percent of the regular undergraduate and associate bachelor students, she said.

"Women account for 40 percent of the labor force, and we see them actively taking part in innovative industries, with 55 percent of new Internet businesses being founded by women."

As across the world, where women have led the way in the response to the COVID-19 pandemic, Chinese women have been at the national front line as medical workers, as well as those leading logistical chain management, community workers promoting risk awareness and prevention of COVID-19, caretakers of the elderly and children at home, or developing vaccines and leading large-scale public health response, said Mlambo-Ngcuka.

However, as with many global players, China still faces challenges that need to be addressed, she said.

Under the difficult circumstances posed by the pandemic, China can play a crucial role to continue supporting women's leadership and participation in the recovery process, to ensure that women's needs and concerns are reflected in the relevant policies such as employment, social protection, food security and social infrastructure.

China also has a major role to play to promote the equal sharing of unpaid care work and to increase investment in the expansion of care services to help reduce and redistribute unpaid care work, and to serve as a powerful policy lever for creating decent employment for women and the conditions for inclusive growth.

Another key step China can take is to harness innovation and technology for women, especially rural and young women. This will support their access to online jobs, markets and digital platforms and cultivate an ecosystem of new women-run businesses, as in rural areas, women account for about 70 percent of the total agricultural labor force, she said.

Li Juan and her family are seen in pear orchard in Tangzhai Village of Tangzhai Town in Dangshan County, east China's Anhui Province, Oct. 23, 2019. Li Juan, 30, holding a stylus in her mouth, communicates with clients and deliverymen and updates the information on her online store through mobile phone. All these are the mainly works Li Juan does as a manager of an e-commerce. (Xinhua/Zhang Duan)

Mlambo-Ngcuka said China has been a strong partner of UN Women at the global level.

As the host of the 1995 Fourth World Conference on Women, on the 20th anniversary of the Beijing Conference, China co-hosted with UN Women the Global Leaders' Meeting on Gender Equality and Women's Empowerment, which was attended by some 80 heads of state and government, who made concrete commitments to advance women's rights, she noted.

"UN Women stands ready to support the government of China in continuing to bring women's needs, contribution and leadership to the forefront of recovery and longer-term development efforts, with the growing support of partners including the All-China Women Federation," she said.

UN Women is the key UN body for gender equality and the empowerment of women and girls.