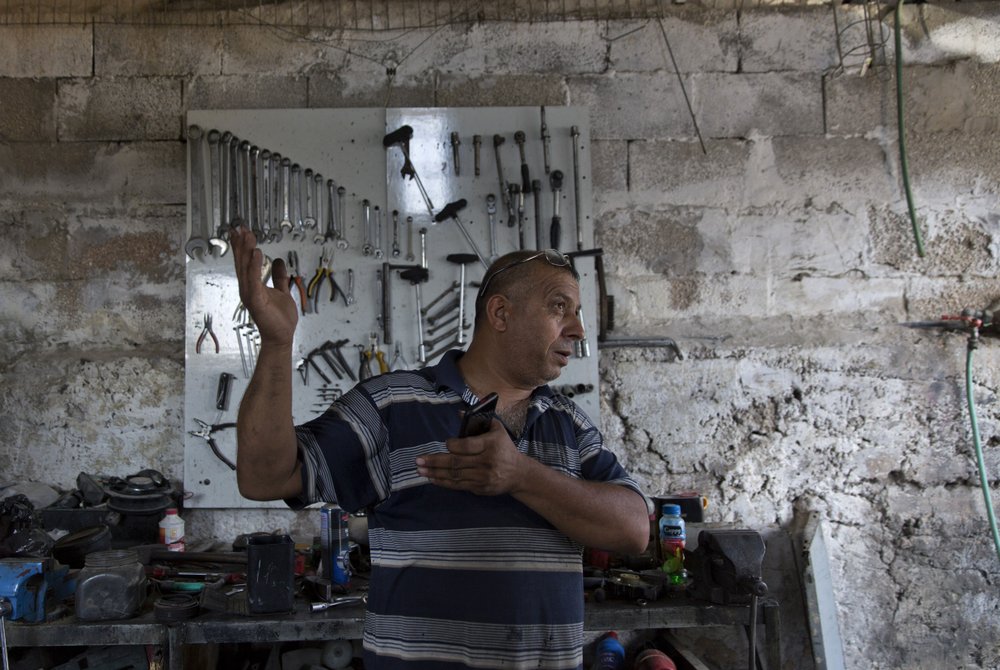 In this Wednesday, Sept. 11, 2019 photo, Palestinian Barhoum Saleh gives an interview at his roadside mechanic shop, near the West Bank Israeli settlement of Elkana, west of Qalqiliya. (Photo: AP)

Barhoum Saleh’s town is surrounded by Jewish settlements, the sign above his roadside mechanic shop is in Hebrew, most of his customers are Israeli and he needs an Israeli permit to visit the beach a half hour’s drive away.

But unlike his Jewish neighbors, he can’t vote in next week’s elections.

Saleh is among the 2.5 million Palestinians in the West Bank who have no voice in choosing Israel’s next government and no control over whether it decides to annex part or all of the occupied territory, as Prime Minister Benjamin Netanyahu has vowed to do . With the peace process having sputtered to a halt a decade ago, they also have little hope of getting a state of their own anytime soon.

Saleh, who is not particularly political, just wishes it was easier to take his kids to the beach.

Israelis who get their cars serviced at his shop describe their trips: one drove down to Egypt’s Sinai, another vacationed in Thailand. But while they can travel in and out of the West Bank freely, Saleh must apply for a permit to enter Israel — and they are not given for family vacations. So, a few years back, he took his family to neighboring Jordan and its Red Sea port of Aqaba, several hours away.

“My kids were astonished when they saw the sea,” he recalls, smiling at the memory. “They said, what’s that?”

The movement restrictions apply to all Palestinians in the West Bank, even those, like Saleh, who live near major settlement blocs that Israel expects to keep in any peace agreement. His shop is just down the road from Elkana, the settlement where Netanyahu kicked off his campaign by vowing to annex parts of the West Bank.

Palestinians here say they have good relations with Israelis, including settlers, who patronize their businesses. But they have little interest in Israel’s elections and expect nothing to change.

Maraei Maraei runs a hardware store in the West Bank village of Mas’ha, which is separated from the Elkana settlement by a wall and a closed metal gate. Elkana’s settlers can vote, while residents of Mas’ha cannot. Still, he shrugs off the talk of annexation.

“It would be hard for them to annex this area because there are too many of us,” he said. “They want land without people.”

The question of what to do with the West Bank, which Israel captured in the 1967 war and would be the heartland of any future Palestinian state, once dominated Israeli elections.

Right-wing candidates argued that Judea and Samaria, the biblical name they use for the West Bank, was an integral part of Israel. Candidates on the left said the failure to create a Palestinian state there would eventually lead to a one-state outcome in which Palestinians would outnumber Jews and demand the right to vote, spelling the end of Israel as a Jewish and democratic state.

But that debate has faded in recent years, and has hardly featured in the campaign ahead of the Sept. 17 vote. Netanyahu’s main rivals have dismissed his talk of annexation as a campaign stunt but have not opposed it on the merits.

They have also vowed to be much tougher toward Hamas, the Islamic militant group ruling the Gaza Strip, accusing Netanyahu of being too soft in the face of Palestinian rocket fire. His main rival, former army chief of staff Benny Gantz, has boasted about his role in the 2014 war, saying he sent parts of Gaza back to the “stone age.”

Israel’s Arab citizens, who make up 20% of the population and largely identify with the Palestinians, are eligible to vote. But it’s unclear whether they will turn out in large enough numbers to make a difference, or whether a Jewish coalition would partner with them.

Ayman Odeh, leader of the main Arab faction in Israel’s parliament, has said he would consider joining a government led by Gantz depending on his political agenda, including his seriousness about pursuing peace with the Palestinians.

Under the Oslo accords, the Palestinians were granted limited autonomy and allowed to vote in their own elections. But the peace process, meant to be temporary, has been at a standstill for years. The Palestinian Authority’s powers are greatly limited, and it hasn’t held presidential or parliamentary elections since 2006 because of the rivalry with Hamas.

A poll released this week by the Jerusalem Media and Communication Center, in partnership with the German foundation Friedrich-Ebert-Stiftung, found that more than 40% of Palestinians believe the Israeli elections will have a negative impact, with another 25% saying they would have no impact at all. Fewer than 20% thought the impact would depend on the outcome. The poll surveyed 1,200 people in the West Bank and Gaza and had a margin of error of plus or minus 3 percentage points.

“The general sense is that regardless of who is in power, much of the same will unfold on the ground here,” said Tareq Baconi, an analyst with the Crisis Group, an international think tank. “But certainly there is a belief that with (Netanyahu) the mask is off, and the international community cannot hide behind the fig leaf of a peace process anymore.”

Some Palestinians say they prefer Netanyahu, with his strident nationalism, to a center-left government that they say would cloak the same policies in the guise of a peace process. Netanyahu’s close ties to President Donald Trump have delivered major gains for the Israeli right, including US recognition of Jerusalem as Israel’s capital, but have alienated many of Israel’s traditional supporters in the US, including many Democrats and Jewish Americans.

“I think it serves us better, as a Palestinian, to have an exposed Israeli leadership, kind of like what we have today,” said Sam Bahour, an Ohio-born Palestinian entrepreneur who runs a West Bank consulting firm. “I think third states are going to have to intervene, and those third states only recently have seen Israel and the US for what they really are.”