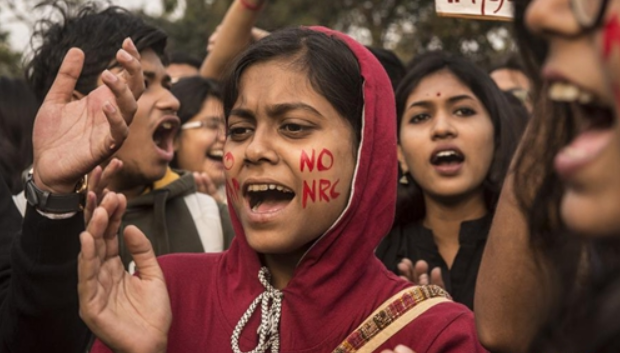 Prime Minister Narendra Modi sought Sunday to reassure India's Muslims as a wave of deadly protests against a new citizenship law put his Hindu nationalist government under pressure like never before.

At least 25 people have died in 10 days of demonstrations and violence after Modi's government passed the law criticized as anti-Muslim. More protests took place Sunday.

Addressing party supporters in New Delhi - who cried "Modi! Modi!" at the mention of the law - the 69-year-old said Muslims "don't need to worry at all" - provided they are genuine Indians.

"Muslims who are sons of the soil and whose ancestors are the children of mother India need not to worry" about the law and his plans to carry out a national register of citizens, Modi told the crowd of thousands.

Accusing the main opposition Congress party of condoning the recent violence by not condemning it, Modi said opponents were "spreading rumors that all Muslims will be sent to detention camps."

The demonstrations have been largely peaceful but protesters have also hurled rocks and torched vehicles, while heavy-handed police tactics including the storming of a Delhi university a week ago have fuelled anger.

Tens of thousands of protests gathered late Saturday in the southern city of Hyderabad, while other protests were held elsewhere. Yet more took place or were scheduled on Sunday, including in Delhi and Kolkata.

The law gives religious minority members - Hindus, Sikhs, Jains, Parsis, Christians and Buddhists - from three neighboring Islamic countries an easier path to citizenship, but not if they are Muslims.

Islamic groups, the opposition and others at home and abroad fear this forms part of Modi's aim to marginalize India's 200 million Muslims and remould the country as a Hindu nation, something he denies.

Authorities have imposed emergency laws, blocked internet access - a common tactic in India - and shut down shops in sensitive areas across the country in an attempt to contain the unrest.

More than 7,500 people have either been detained under emergency laws or arrested for rioting, according to state officials, with 5,000 in Uttar Pradesh state alone where 17 people have been killed.

Modi's government, reelected in May, has defended the law saying it is meant to help "persecuted" minorites from Muslim-majority Pakistan, Bangladesh and Afghanistan.