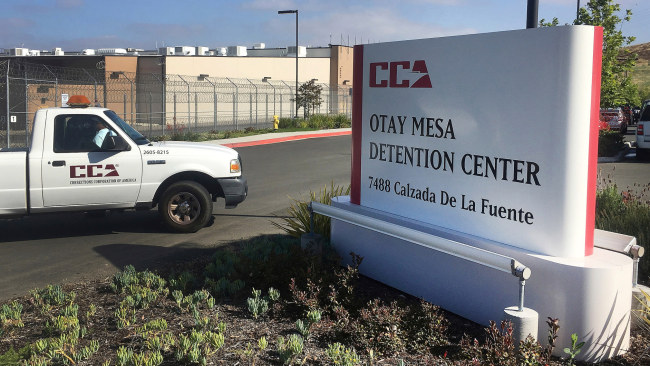 Escobar was identified by a family representative as a diabetic who left El Salvador with his mother and sisters in 1980 and lived in the Los Angeles area. Alex Guzman of the Otay Mesa Detention Resistance advocacy group said he had been detained at the San Diego facility since January.

Escobar's sisters told The San Diego Union-Tribune that he received a blood transfusion Tuesday but his body had already been too weakened by the virus.

"My brother was a one-of-a-kind," Maribel Escobar told the newspaper.

Two guards at an ICE jail in the state of Louisiana died from COVID-19 last week.

Relatives of both detention guards, Carl Lenard, 62, and Stanton Johnson, 51, told the AP the Richwood Correctional Center in Monroe, Louisiana, had at one point prevented them from wearing masks as the virus spread through the facility.

LaSalle Corrections, the company that operates Richwood, told the AP that protective equipment "is provided as necessary and employees can bring and wear masks."

On Friday, a group of about 10 ICE detainees in a Dartmouth, Massachusetts immigration detention center reportedly became combatant, trashing a section of the facility and causing more than 25,000 US dollars in damages after first reporting they had COVID-19 symptoms and then refusing to get tested.

The detainees feared contracting the virus through cross-contamination in the medical unit where officers were wanting to transfer them to, according to Lawyers for Civil Rights in Boston which filed a lawsuit on behalf of the detainees.

The Bristol County Sheriff's Office has reported a total of 12 COVID-19 infections including one correctional inmate.

ICE has released at least 192 at-risk detainees as of April 24 after orders from a federal judge in the state of California forced the agency to do so in order to avoid severe illness or death if immigrants contract COVID-19.