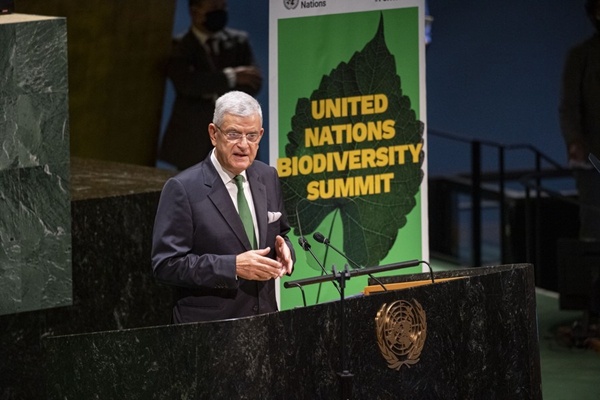 The United Nations General Assembly (UNGA) on Thursday decided to hold on Dec. 3-4 a special session on galvanizing international cooperation to deal with the COVID-19 pandemic.

"The special session of United Nations General Assembly on the coronavirus disease 2019 (COVID-19) pandemic is a historic moment, and a test, for multilateralism. It will be defined by our collective action on one of the most critical issues of our time," Volkan Bozkir, president of the 75th session of the UNGA, said in his remarks before the adoption of the Modalities Resolution for the 31st Special Session of the General Assembly on the COVID-19 Pandemic.

The resolution was adopted by 150 of the 193 UNGA member states. No country voted against the move, but the United States, Israel and Armenia abstained.

"It is vital that the special session provides an inclusive platform which has the capacity to hear from and address the concerns of member states and other stakeholders, including civil society, academia, and private sector experts pioneering the development of vaccines. To this end, the second day will feature interactive multistakeholder dialogue panels on different aspects of COVID-19," said Bozkir.

According to the resolution, the special session, at the level of heads of state and government, will consist of an opening segment, a general debate and a closing segment.

The general debate shall be held on the first day of the special session and include statements by member and observer states and the European Union and, time permitting, a limited number of representatives from relevant organizations attending the special session.

World leaders will be able to submit five-minute pre-recorded statements, which will be broadcast in the General Assembly Hall. Seven minutes will be given to speakers on behalf of a group of states.

The pre-recorded video clips will be played after short introductions from representatives physically present in the hall, a practice similar to that of the serial high-level meetings of the annual UN General Assembly in September.