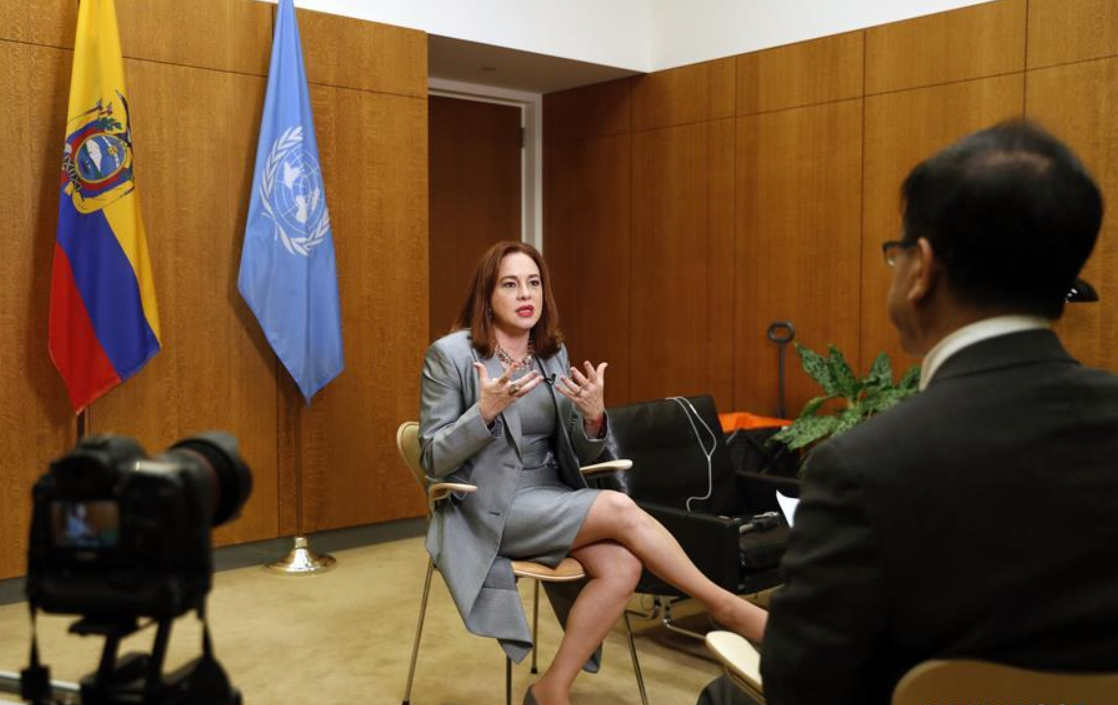 In an exclusive interview with Xinhua Thursday on the sidelines of the general debate of the 73rd session of the UNGA (UNGA 73), Espinosa said that she will try her utmost to bring the UN closer to the people and vice versa.

"China has a very important role to play in consensus-building on very important issues" from the perspective of the General Assembly, said Espinosa.

Referring to China as "a very powerful stakeholder," the second largest contributor to the UN and a permanent member of the Security Council, she said China is one of the countries that have done more by using "fast-track mechanism" to implement the 2030 sustainable development goals (SDGs).

"In terms of a consensus builder, China is a leader and a promoter of this development agenda," she noted.

Espinosa has also spoken highly of China's leading role on such international issues as climate change where China is one of the countries "with stronger performance on the reconversion of the energy matrix."

Espinosa said that she backs China's increasing investment of resources and technologies to boost low carbon technologies and renewable energy.

China is really commendable, because it's a driving force to help the world meet the mitigation targets within the Paris agreement, she noted.

Besides, the UNGA president gave thumbs up to China's contributions to UN's peace and security agenda.

From trade to climate change to development and fighting diseases, world leaders and high-level representatives have mounted the podium of the UNGA over the past few days to deliver a ringing endorsement of multilateralism, singling out a strengthened UN as the prime tool for improving humanity's lot.

"Multilateralism is the only way to address global challenges," said Espinosa, noting that "global leadership and collective action" are needed.

The UN is the "house for multilateralism," she said.

"If we make sure that the organization delivers for the people that we will represent and serve, we are going to be better off," she added.

The theme of the current UNGA session is "Making the United Nations Relevant to All People: Global Leadership and Shared Responsibilities for Peaceful, Equitable and Sustainable Societies", which, Espinosa said, means that the UN should translate its work into people's daily lives, and to "really touch the lives and improve the lives and the livelihood of people on the ground."

"The parliament of multilateralism, and the parliament of the world is the General Assembly," she said, expressing the hope that she could be "up to the expectations and the needs of people in need around the world."

Pointing out that multilateralism is "being threatened and put under question," she felt relieved that more than 130 heads of government and state have come to New York "to have dialogues, express their views, and have bilateral meetings."

On the significance of protecting global order, she said that "we need rules and regulations to ensure that our interaction with other countries, and our commitments that our common challenges are addressed in a way that is predictable, organized and in accordance with international law."

She stressed the need to "deliver and strengthen the rules-based international system," noting that it is the common responsibility of all UN member states.

"After talking with member states and looking at the 40 mandates and over 15 high-level events and conferences over the course of the session, we have come up with seven priorities," she said.

"I have taken the liberty of proposing the following seven priority items for this session: First of all, gender equality and empowering women must continue to be a priority until it is actually achieved," she said.

The second priority would be "promoting and implementing new global compact on migration and refugees," said Espinosa.

"It is our duty to seek to protect the millions of refugees across the world and gear our efforts towards safe, orderly and regular migration," she noted.

Talking about how to make the UN more relevant to all people, Espinosa said that the UN should really "serve the people in need, serve the refugees and people who suffer most."

"We should make people know that their own leaders are working under the umbrella of the United Nations to make their lives better and to touch their lives in the positive way," she said.

The UN General Assembly on June 5 picked Espinosa, Ecuador's minister for foreign affairs and human mobility, to be the president of its 73rd session.

She formally took over the UNGA presidency on Sept. 17 from Slovakia's Miroslav Lajcak. The tenure is one year.