UNITED NATIONS, Aug. 9 (Xinhua) -- The head of the United Nations Children's Fund (UNICEF) has strongly condemned the airstrike against a school bus in northern Yemen on Thursday, which has reportedly killed more than two dozen children. 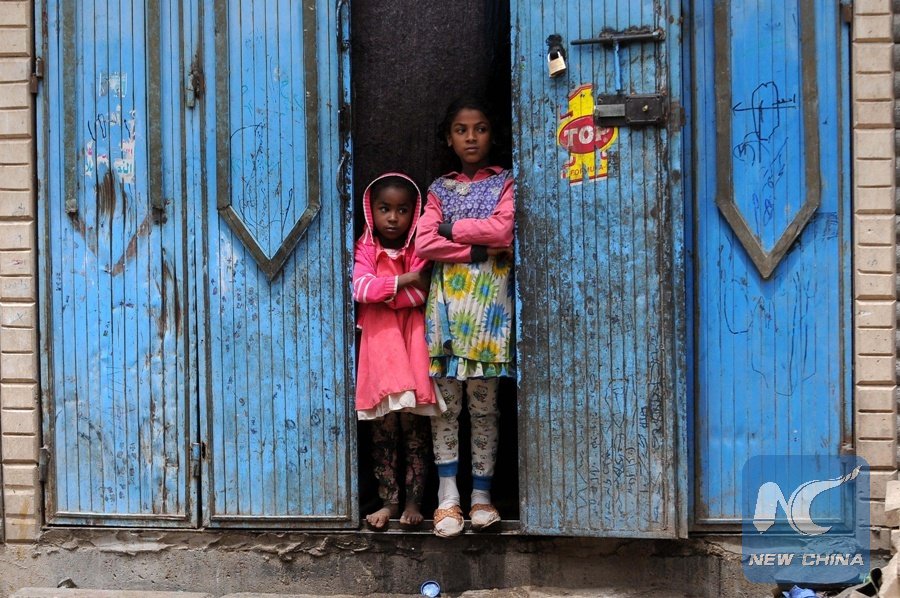 Internally displaced children from the Sea Port city of Hodeidah stand outside a door of the shop where they are sheltered, in Sanaa, Yemen, on July 3, 2018. Armed confrontations between the Yemeni government forces and the Iran-backed Shiite Houthi group forced thousands of people to flee their homes in the strategic port city of Hodeidah amid lack of basic necessities including food, clothing and water. (Photo: Xinhua)

"Attacks on children are absolutely unacceptable," said UNICEF Executive Director Henrietta Fore on Thursday. "I'm horrified by the reported airstrike on innocent children, some with UNICEF backpacks. Enough is enough."

The attack hit the school bus in a market in Dahyan, in the northern province of Saada. While the exact death toll remains to be confirmed, initial news reports indicate that the number of casualties could be well above 60, with dozens severely injured. Many of the children were reported to be under the age of 10.

Fore called all warring parties to "respect international humanitarian law," and spare children, civilians and civilian infrastructure to prevent Yemen from falling "further into the abyss and the humanitarian catastrophe" it has been facing for over three years.

Since conflict between pro-government forces and Houthi rebels escalated in 2015, about 2,500 children have been killed and 3,600 maimed in Yemen, according to the UNICEF.

Yemen's conflict has its roots in uprisings that date back to 2011, but fighting escalated in March 2015, when an international coalition led by Saudi Arabia intervened militarily at the request of Yemen's president.

"Attacking children is the lowest any party of this conflict can go," UNICEF Yemen Resident Representative Meritxell Relano told UN News. "There is no justification whatsoever to attacking children."

Attacks against civilians have been the scourge of this conflict. According to the UN Office for the Coordination of Humanitarian Affairs (OCHA), "tens of civilians were killed in violence in several governorates" in the past 10 days alone, UN News reported.

Last Friday, during a particularly deadly attack, one of the last functioning hospitals, Al Thawra in Al Hudaydah, was struck, reportedly causing the death of dozens of vulnerable, sick and injured civilians.