UNITED NATIONS, Oct. 26 (Xinhua) -- Some 2,300 children among the thousands of migrants marching through Mexico toward the U.S. border need protection and access to essential services like health care, clean water and adequate sanitation, the UN Children's Fund (UNICEF) said on Friday. 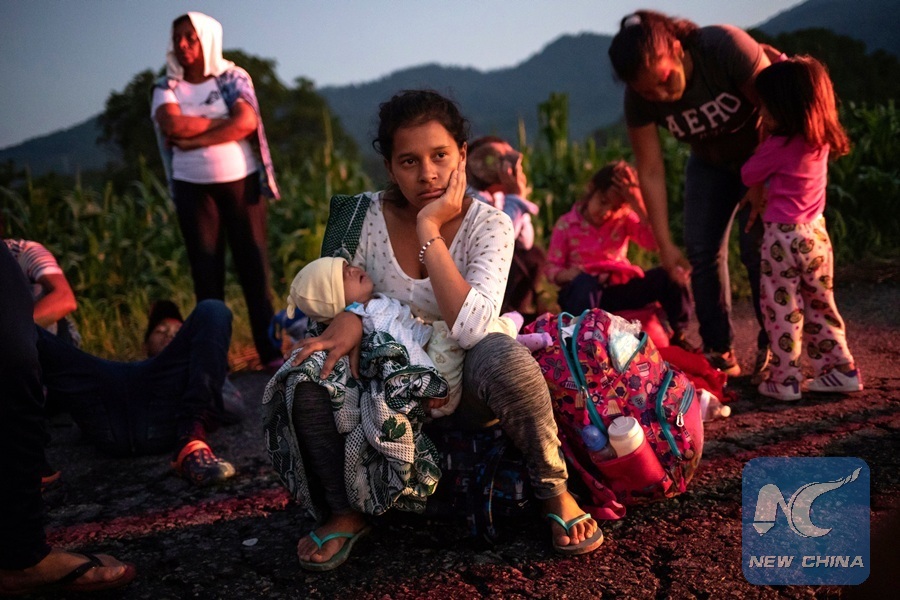 A migrant woman rests roadside with her child while traveling with a caravan of thousands from Central America en route to the United States as they make their way to Mapastepec from Huixtla, Mexico, Oct. 24, 2018. (Photo: Xinhua)

"Some have already fallen ill or suffered from dehydration," said UNICEF in a statement issued at UN Headquarters.

"The long and arduous journey has left children exposed to inclement weather, including dangerously hot temperatures, with limited access to proper shelter," said the children's agency, citing reports from teams on the ground.

Those traveling with the caravan hope for safety in numbers, UNICEF said, but "the perils of using irregular migration routes remain significant, especially for children. The journey is long, uncertain and full of danger, including the risk of exploitation, violence and abuse."

Members of the children's agency said they are working with the Mexican government and other partners to ensure that uprooted children are provided with the support and services they need and that their rights are upheld. This includes providing technical assistance to authorities on nutrition and child protection, and expanding access to psychosocial support.

UNICEF and its partners said they are also providing children and families in the caravan with more than 20,000 liters of safe drinking water, hygiene and sanitation packs, oral rehydration salts, sunscreen and soap.

Earlier in the week the official number of migrants trekking through Mexico on the way from Honduras and Guatemala was estimated at more than 7,000 migrants. However, the number has dwindled, reports from the scene indicate, but there so far has not been any official estimate of the reduced total number which some said could be in the range of 4,000 plus people.

"Many of the children and families in the caravan are fleeing gang and gender-based violence, extortion, poverty and limited access to quality education and social services in their home countries of northern Central America -- El Salvador, Guatemala and Honduras," UNICEF said.

"These conditions are part of daily life for millions of children in the region," the agency said. "Each day, families facing these harsh conditions make the painful decision to leave their homes, communities and countries in search of safety and a more hopeful future."

Cover image: Honduran migrants heading in a caravan to the US, await at the roadside to get a ride, near Pijijiapan, southern Mexico on October 26, 2018. (Photo: VCG)