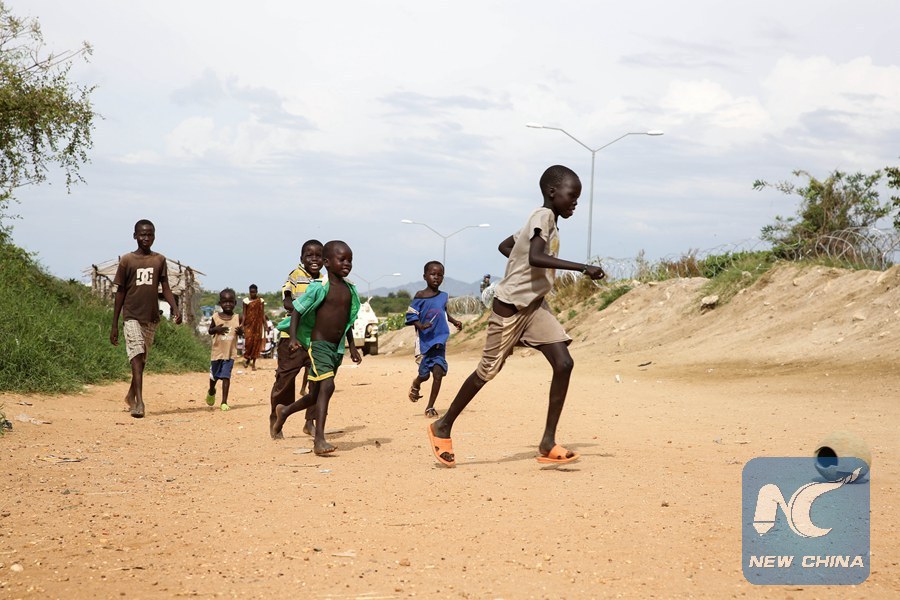 South Sudan children are bearing the brunt of a crisis that entered its fourth year, the UN children's agency said in a report released on Friday.

UNICEF said the children have been victims of malnutrition, disease, forced recruitment, violence and the loss of schooling, and are growing up in a world of violence and fear and hunger, robbing them of their childhood.

Leila Pakkala, UNICEF's Regional Director in Eastern and Southern Africa, said no child should ever experience such horrors and deprivations.

"Yet children in South Sudan are facing them on a daily basis. The children of South Sudan urgently require a peaceful and protective environment," Pakkala said.

In releasing the Childhood under Attack report, UNICEF warned that new funding is essential in order to provide critical assistance to children and women.

The UN children's agency said it requires 183 million U.S. dollars in new funding in 2018 in order to deliver life-saving supplies and services to stave off hunger and disease. Currently UNICEF has a funding gap of 77 percent.

The report says years of insecurity and upheaval have had a "staggering impact on children," threatening an entire generation.

"The fighting forces must immediately end all grave violations against children. This includes releasing all children from their ranks, as they have pledged to do," says the report.

According to UNICEF, getting assistance to those most in need continues to be a challenge in many insecure areas of the country.

Mahimbo Mdoe, UNICEF Representative in South Sudan, said for children to have a fair chance in life, they need proper nutrition and care.

"They need protection from fighting and from diseases. They need a safe environment so they can learn and play. If children are not given a fair chance in life, what future will the country itself have when those children grow up?" asked Mdoe.

The UN agency called on government forces and armed groups, as well as the international community, to do everything they can to end this conflict so South Sudan's children, and the country itself, will have a future to look forward to.

"All parties to the conflict must allow unrestricted humanitarian access to all areas of the country and immediately end attacks on humanitarian workers and supplies," UNICEF said.

Humanitarian organizations in South Sudan are looking for the full implementation of a recent presidential order calling for unrestricted access to those in urgent need of aid.

The UN agency has been delivering lifesaving assistance to children across the country since the crisis started in December 2013, including treatment of more than 600,000 with severe acute malnutrition, vaccination against measles for more than 3.3 million children, provision of primary health care services to more than 3.6 million children, and supporting the access to safe water supply for 1.8 million people.

"This has been done despite the huge challenges faced in a country that ranks among the world's most dangerous for aid workers," UNICEF said.

Since the conflict started in 2013, 95 aid workers have been killed, including 25 killed so far this year.