The National Nurses Union applauded President Joe Biden's proposal to require that companies with more than 100 employees vaccinate their work force. The American Federation of Teachers once said vaccine mandates weren't necessary, but now embraces them. In Oregon, police and firefighter unions are suing to block a mask mandate for state workers. 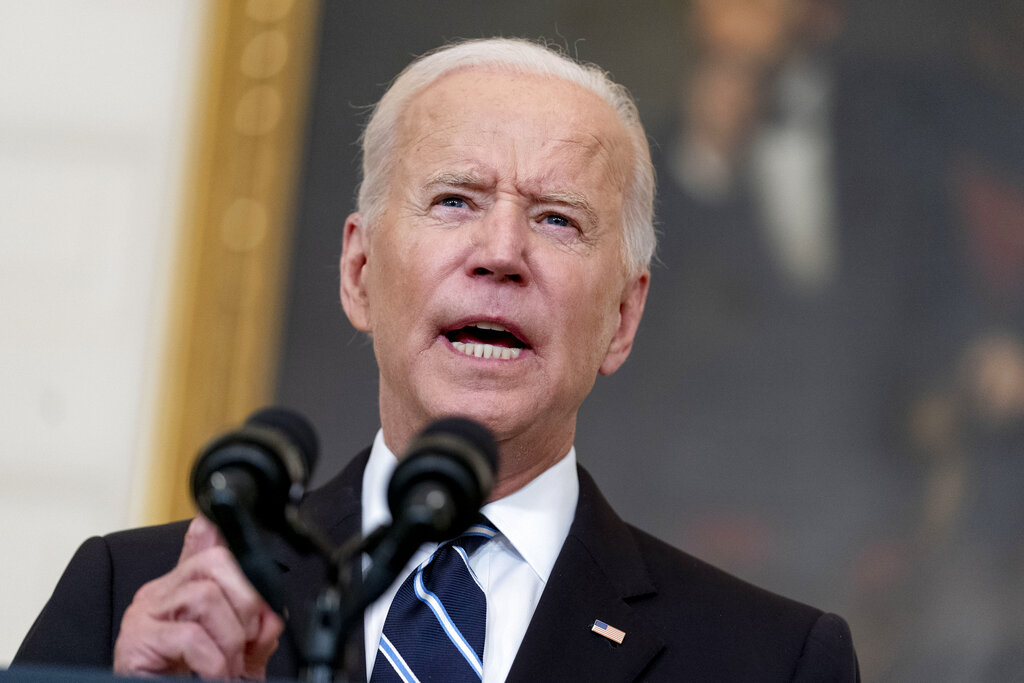 US President Joe Biden speaks in the State Dining Room at the White House, Thursday, Sept. 9, 2021, in Washington. (Photo: AP)

The labor movement is torn over vaccine requirements — much like the country as a whole — wanting to both support its political ally in Biden and protect its members against infection but also not wanting to trample their workers' rights.

“Labor unions are a microcosm of the society we live in,” said Patricia Campos-Medina, executive director of Cornell University's The Worker Institute. “The same political divide we have right now exists within the rank and file of unions.”

That divide complicates matters for Biden as he tries to get the delta variant under control. Unions are a key part of the Democratic Party, and Biden has embraced them to burnish his blue-collar, middle-class image. Dissent in Biden's own coalition may make it especially hard for him to implement new vaccination requirements. Some unions representing federal workers already objected to his push for inoculation among the U.S. government workforce, saying such matters involving new workplace requirements and discipline need to be negotiated at the bargaining table.

In a sign of the importance of the issue to the Biden administration, the White House reached out to union presidents before Biden announced his new policy Thursday and will continue to check in with labor leaders, said an administration official, who insisted on anonymity to discuss forthcoming plans.

Biden will require companies with more than 100 workers to give their employees shots or test them weekly. He will also mandate shots for executive branch workers and federal contractors with no testing opt-out. The new requirements could cover 100 million Americans.

Momentum seems to be on the side of mandates. The AFL-CIO, the umbrella organization over much of the country's unions, praised mandates and Biden's plan in a statement released Friday. “The resurgence of COVID-19 requires swift and immediate action, and we commend President Biden for taking additional steps to help put an end to this crisis. Everyone should be vaccinated — as one step in stopping the pandemic,” the organization's president, Liz Shuler, said in the statement.

The AFT two weeks ago mandated that its employees in its offices be vaccinated and has become a strong advocate of workplaces requiring vaccinations. “Safety and health have been our north star since the beginning of the pandemic,” said Randi Weingarten, the union's president. The union's support for mandates, she added, “creates great cheer among two-thirds of our people and will create agita in one-third of the people.”

Still, many labor leaders are hesitant to wade into the mandate issue. Many of the employers of the workers of the Laborer's District Council of Western Pennsylvania, like hospitals, have begun requiring vaccinations. Whenever members complain, the council's business manager, Phillip Ameris, tells them it's not the union's call.

"What we have said is, 'we encourage our members to the get the vaccine,’ but what we’re telling everyone to do is to go to your physician,” Ameris said. “We’re trying to keep it nonpolitical. ... Go to your doctor and ask your doctor what is best for you.”

Some of the most heated opposition has come from law enforcement unions. In Newark on Thursday, police and fire unions from across New Jersey protested against the mayor's vaccine mandate outside city hall. Police unions from Chicago to Richmond have pushed back against mandates in their cities. In Portland, Oregon, the local police union got its members exempted from the city's vaccine order and a group of police and firefighter unions are suing Gov. Kate Brown to block the state's vaccine requirement for its workers.

Simon Haeder, a political scientist who studies vaccine mandates at Penn State University, said it makes sense that the strongest resistance has come from police and firefighters. “The more conservative side of the labor movement, in terms of politics, are going to be the police and firefighter unions,” he said, noting that response to the coronavirus has become highly polarized. “Yes, you're a union person and yes, you want the workplace to get back to normal, but the identity of being a Republican outweighs a lot of those things.”

Bill Johnson, executive director of the National Association of Police Organizations, said police officers are reacting like most Americans. “You've got, like in the rest of the country, really strong feelings on both sides,” Johnson said.

Still, police unions can see the writing on the wall — and want any mandates to be negotiated through the collective bargaining process, Johnson said. “There's a sense from the union perspective that vaccination policy is pretty much going to be mandated,” he said. “We want a place at the table when we discuss implementation.”

Campos-Medina said mandatory vaccination is such an obviously important public health policy that she expects unions to ultimately accept it. She compared it to bans on indoor smoking, which rankled some unions years ago but is a subject which hardly ever comes up at the bargaining table today. “We will get there,” she said.

Weingarten's union had initially, like Biden, opposed vaccine mandates and said persuading workers to get their shots was a better approach. But after the delta variant kicked caseloads higher this summer and filled up hospital beds, AFT reconsidered.

She, too, thinks unions will almost all ultimately coalesce behind a pro-mandate position. But, she notes, it will take time.

“The leadership in unions I talk to know that vaccines are really important,” Weingarten said. “What they're trying to do is balance between all these different services and responsibilities we have to our members.”