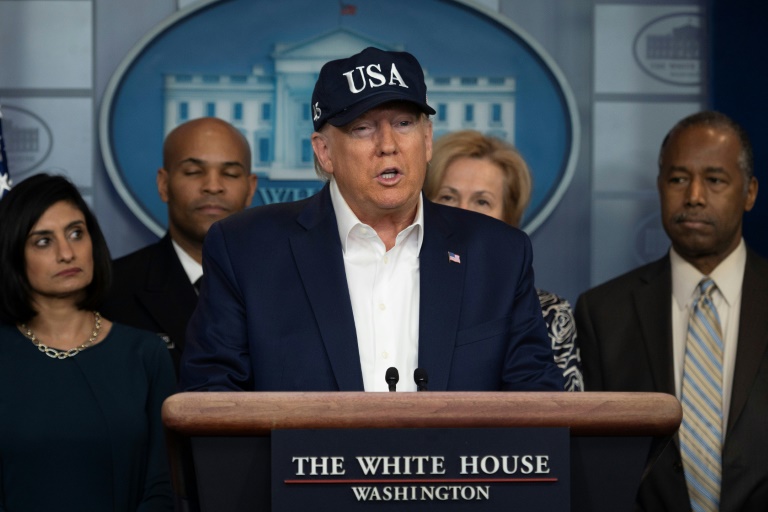 US President Donald Trump, after pursuing a trade war with China, is waging a blame game over coronavirus. (Photo: AFP)

"I think the patient is stabilised," then US president Barack Obama declared after G20 powers prescribed unprecedented remedies to steady the crisis-wracked world economy just over a decade ago.

Today, as the world fights to immunise global growth from the coronavirus pandemic and Obama's successor Donald Trump rips up the rulebook of cooperation, there has been no such collective response, and globalisation itself is ailing.

"He's always been of the view that if you can just maintain external security, you'll feel better about yourself, whether it's to do with trade or the virus," he said.

"It does add to the anti-globalisation story."

The outbreak risks exacerbating isolationist and populist trends already in evidence, after COVID-19 emerged in China late last year to infect much of the rest of the world.

Trump, after pursuing a trade war with China, is waging a blame game and blindsided Europeans by banning travel from the continent to ward off the "foreign" disease.

Some countries in Europe are also shutting their borders.

"Our experience is that primarily foreigners brought in the disease, and that it is spreading among foreigners," Hungary's Prime Minister Viktor Orban said.

There is no scientific basis for such claims. But in concrete terms, the pandemic has exposed the reliance of many companies, from Apple to fashion chain Zara, on China as the world's foremost production hub.

Trump's populist rhetoric and tariffs war were already forcing some companies, Apple included, to look at "reshoring" jobs back home or diversifying supplies.

The trend could deepen as the coronavirus strains or breaks supply chains centred on China, according to Vicky Redwood, senior economic adviser at Capital Economics.

"Globalisation has undermined the power of national governments and been blamed for rising inequality, multinational tax avoidance and unwanted migration," she said.

"But business fundamentals are important too -– for example, regardless of politics, companies have been waking up to the problems that long and complicated supply chains bring."

In the years since the financial crisis took hold in 2008, globalisation as measured by trade flows and foreign direct investment has flatlined as a proportion of GDP, according to analysis by Capital Economics.

Over the past decade, it has also started to make more business sense to have production closer to home as China becomes more expensive, thanks to rising wages and a shrinking workforce.

"China's wealth level is 10 times higher per person and labour costs are vastly higher than they were 20 years ago," Robertson commented.

"So you don't get the same cost benefit."

The 2008 banking crisis gave birth to G20 summits of nations including China to determine collective measures.

"You've got a sick patient; I think we applied the right medicine," Obama said after a summit in London in April 2009 adopted far-reaching financial and trade responses.

Fast-forward to earlier this month, when the more select group of G7 economies vowed to use "all appropriate policy tools" to protect world growth against the epidemic.

Despite a lack of specifics, financial markets hoped that meant concerted action was coming.

But just hours later the US Federal Reserve -- long subject to furious attacks from Trump for keeping rates too high -- surprised observers with an emergency rate cut.

Other changes to monetary policy came only later, including from the Bank of England, and the European Central Bank is still holding its borrowing rates in place.

Only on Friday did the G7 nations decide to hold a videoconference on Monday to coordinate action against the coronavirus.

"Multilateralism does appear to be in decline. This might limit coordinated responses," Redwood said, as several countries pursue their own virus-fighting stimulus plans.

The recent bloodbath on markets shows that there are limits to what policymakers can do, in the face of a systemic shock caused not by bad policy but by a pandemic.

And markets are unconvinced that central banks have much more to offer from their medicine cabinets, having already taken drastic steps since 2008.

Still, observers say, Trump is not helping with a series of confusing bromides seemingly aimed with an eye on inoculating his political prospects in an election year.

"There's a wider disparity in communication in the US than we're seeing in other parts of the world. That causes frustration (for businesses)," said Charlie Netherton, head of client advisory services at Marsh Risk Consulting.

"We need to see a coordinated response across geographic boundaries with regards to both containment and business stimulus," he said.