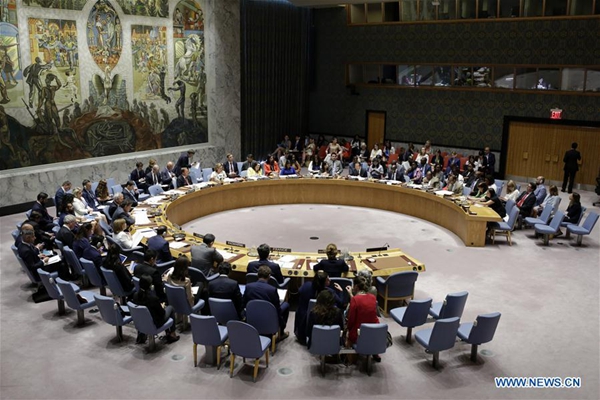 Photo taken on July 9, 2018 shows a general view of the United Nations Security Council meeting on children and armed conflict at the UN headquarters in New York. [Photo/Xinhua]

The Security Council on Monday adopted a resolution aimed at a framework for mainstreaming protection, rights, well-being and empowerment of children throughout the conflict cycle.

Resolution 2427, which won unanimous approval of the 15 members of the council, strongly condemns the recruitment and use of children by parties to armed conflict as well as their re-recruitment, killing and maiming, rape and other forms of sexual violence, and abductions.

The resolution also condemns attacks against schools and hospitals and the denial of humanitarian access by parties to armed conflict and all other violations of international law committed against children in situations of armed conflict.

It demands that all relevant parties immediately put an end to such practices and take special measures to protect children.

The resolution also emphasizes the responsibility of all states to put an end to impunity and to investigate and prosecute those responsible for genocide, crimes against humanity, war crimes and other egregious crimes perpetrated against children.

The resolution reiterates the Security Council's readiness to adopt targeted and graduated measures against persistent perpetrators of violations and abuses committed against children.

It calls on member states and the United Nations to mainstream child protection into all relevant activities in conflict prevention, conflict and post-conflict situations with the aim of sustaining peace and preventing conflict.

It recalls the importance of ensuring that children continue to have access to basic services during the conflict and post-conflict periods, including education and health care, and urges member states, UN bodies and civil society to take specifically into account girls' equal access to education.

The adoption of the resolution preceded a high-level open debate on children and armed conflict, which was chaired by Swedish Prime Minister Stefan Lofven, whose country holds the presidency of the Security Council for July.

Over 21,000 cases of grave violations of children's rights in armed conflict have been verified by the United Nations for 2017, a drastic increase from the previous year with 15,500 violations, according to an annual report of the UN secretary-general on children and armed conflict that was released last week.

Among the violations in 2017, some 15,000 were perpetrated by non-state armed groups and about 6,000 were committed by government forces, according to the report.