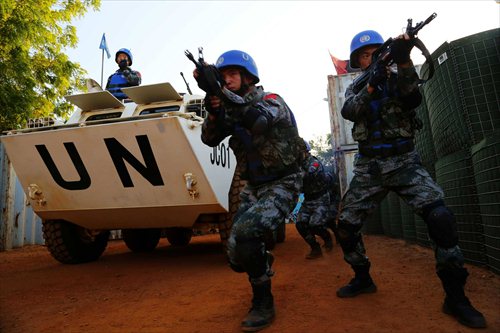 Chinese UN peacekeepers in Mali are on patrol with an armored car. (Photo: CFP)

The United Nations Security Council (UNSC) on Saturday condemned the attack against peacekeepers of the UN Multidimensional Integrated Stabilization Mission in Mali (MINUSMA) in the area of Siby.

"The members of the Security Council expressed their deepest condolences and sympathy to the families of the victims, as well as to Guinea and to MINUSMA," read a UNSC press statement.

"They stressed that involvement in planning, directing, sponsoring or conducting attacks against MINUSMA peacekeepers constitutes a basis for sanctions designations pursuant to UNSC resolutions."

"The members of the Security Council expressed their concern about the security situation in Mali and the transnational dimension of the terrorist threat in the Sahel region," said the statement, adding that "these heinous acts will not undermine their determination to continue to support the peace and reconciliation process in Mali."

The peacekeepers were reportedly in a rental vehicle on their way to return to Guinea when they were stopped some 44 km southwest of Bamako on Friday night, MINUSMA said.

Three peacekeepers were killed in the attack.

UN peacekeepers and French forces are stationed in central and northern Mali to combat well-armed jihadist groups with links to al-Qaida and Islamic State seen as threatening security across Africa's Sahel region.