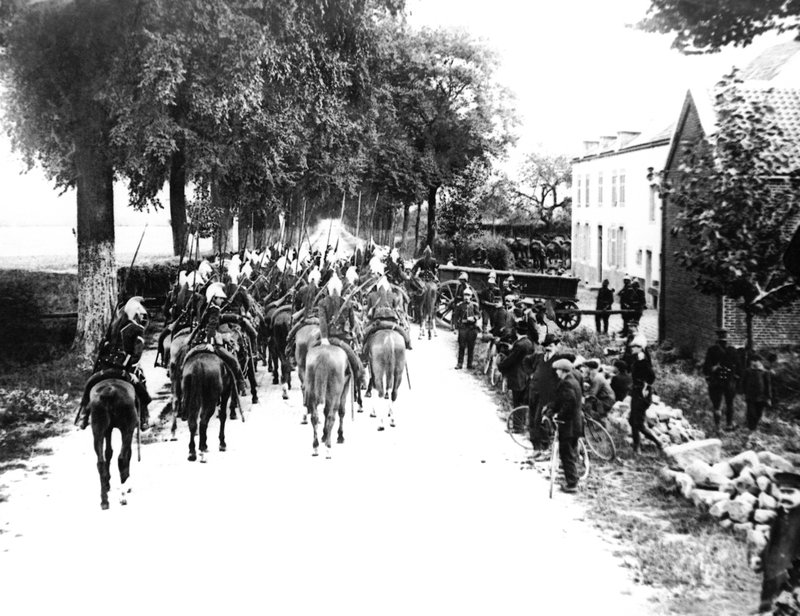 FILE - Lancers on horseback enter a Belgium village in the first days of the war on the Western Front in a 1914 photo. (Photo: AP)

They were messengers, spies and sentinels. They led cavalry charges, carried supplies to the front, comforted wounded soldiers and died by the millions during World War I.

Horses, mules, dogs, pigeons and even a baboon all were a vital — and for decades overlooked — part of the Allied war machine.

Researchers have been hard-pressed to find official accounts of the services rendered by animals during the Great War. But if their labors once were taken for granted, four-legged and winged warriors have been acknowledged more recently as unsung heroes.

France recently decided to recognize their wartime role. And in 2004, Britain installed a huge memorial on the edge of London’s Hyde Park to “all the animals that served, suffered and died alongside the British, Commonwealth and Allied forces in the wars and conflicts of the 20th century.”

Here’s a look at how they contributed.

An estimated 10 million horses and mules, 100,000 dogs and 200,000 pigeons were enrolled in the war effort, according to Eric Baratay, a French historian specializing in the response of animals to the chaos, fear and smells of death in the mission that man thrust upon them.

World War I marked the start of industrial warfare, with tanks, trucks, aircraft and machine guns in action. But the growing sophistication of the instruments of death couldn’t match the dog tasked with finding the wounded, the horses and mules hauling munitions and food or the pigeons serving as telecommunications operators or even eyes, carrying “pigeongrams” or tiny cameras to record German positions.

“They were quasi-combatants,” said Serge Barcellini, comptroller general of the Armed Forces and head of Le Souvenir Francais — The French Memory — in a recent speech devoted to the role played by beasts of war.

In France, as in Britain and elsewhere, horses and mules were requisitioned.

One typical sign posted in southern Paris ordered citizens to present their steeds and mules to the Requisition Committee by Nov. 14, 1914, or risk “prosecution by the military authority.” It was becoming clear there would be no quick end to the war that ground on for four more years.

Cher Ami, or Dear Friend, the carrier pigeon who wouldn’t quit, lived up to her name, saving the lives of 194 American troops of the “Lost Battalion” of the 77th Infantry Division, isolated behind enemy lines during the 1918 Meuse-Argonne offensive in eastern France.

About 550 men had held their ground against a far larger German force for days before coming under fire from American troops unaware the trapped soldiers weren’t the enemy.

On Oct. 4, Maj. Charles Whittlesey sent Cher Ami into the skies with a final message giving the US battalion’s location, followed by a plea: “For heaven’s sake stop it.”

Cher Ami lost an eye and a leg from German gunfire, but kept flying, around 25 miles (40 kilometers) in about a half-hour, according to the United States World War One Centennial Commission. Survivors of the “Lost Battalion” returned to American lines four days later.

French Commander Sylvain Eugene Raynal, encircled by Germans at the Fort de Vaux near Verdun, was counting on Vaillant to save his men.

The feisty bird flew through toxic gas and smoke, reaching the Verdun pigeon loft choked by fumes. With no help arriving despite Vaillant’s courageous effort, Raynal and his men surrendered three days later.

Horses are ancient warriors, but most of those conscripted during World War I weren’t war-ready. They died by the millions, from disease, exhaustion and enemy fire, forcing the French and British armies to turn to America to renew their supply. A veritable industry developed with more than half a million horses and mules shipped by boat to Europe by fall 1917, according to the American Battle Monuments Commission.

So important was the commerce that the Santa Fe Railroad named a station Drage, after British Lt. Col. F.B. Drage, the commander of the British Remount Commission in Lathrop, Missouri, a major stockyard for the future beasts of war.

“So the war business in horses and mules is good,” read an article in the December 1915 issue of The Santa Fe Magazine, for employees of the railway system. Good for the farmer, contractor, supplier and railroads, it said, but “not good for the animals.”

Among the more exotic animals called into service was a baboon named Jackie, who served with the 1st South African Infantry Brigade in then British-occupied Egypt and later in the trenches in France and Belgium. His acute hearing and keen eyesight helped warn soldiers of enemy movement or possible attacks when he would screech and tug on their clothing.

Jackie was wounded in Flanders Fields when the South African brigade came under heavy shelling in April 1918 and his leg had to be amputated.

Lt. Col. R.N. Woodsend, of Britain’s Royal Medical Corps, described that procedure: “He lapped up the chloroform as if it had been whiskey, and was well under in a remarkably short time. It was a simple matter to amputate the leg with scissors.”

Man’s best friend helped soldiers survive. Dogs served, firstly, as spotters of the wounded, learning to identify ally from enemy. They also served as sentinels, messengers, transporters and chasers of rats — the bane of the trenches along with lice and fleas. The French military created a service devoted to dogs of war in December 1915.

Less official, but crucial to soldiers’ morale, was the role of dogs and other creatures in the trenches, and as mascots. Stray dogs running from fighting were adopted as companions along with other animals, including a Royal Air Force fox mascot adopted by British pilots.

These dogs and other mascots helped soldiers “think of life ... and the life they hoped to find again,” said Baratay, the French historian, in a speech last month in Paris.