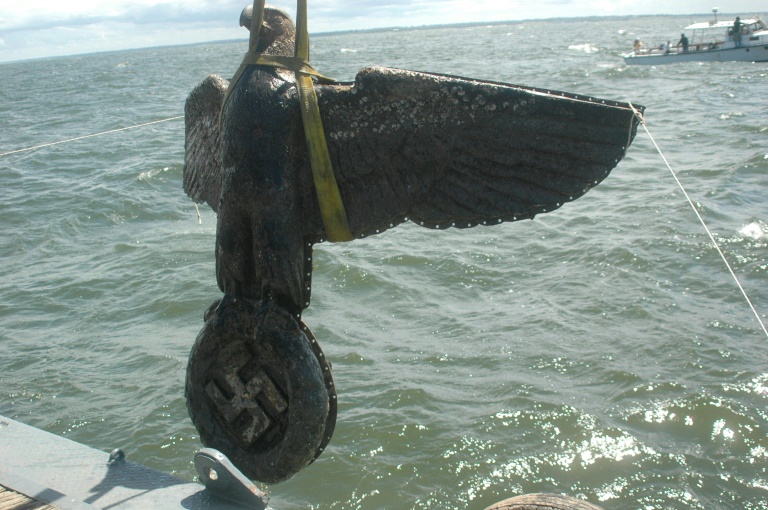 A photo of the Nazi eagle on the Admiral Graf Spee the day it was recovered in 2006. (Photo: AFP)

A court in Uruguay has ruled that a bronze Nazi eagle from a German destroyer that fought in one of the first naval skirmishes of World War II must be sold.

Half the proceeds will go to the government and half to the salvage team that found the insignia in the River Plate off Montevideo in 2006 after a decade of searching, the ruling said.

This 50-50 split is stipulated in an agreement the salvagers signed with the Uruguayan navy in 2004. The treasure hunters had filed suit arguing the government reneged on that deal.

Since it was found, the sculpture -- seen as likely to fetch a handsome sum at auction -- from the ship called the Admiral Graf Spee has been kept in a navy warehouse.

It features an eagle with its wings spread wide open and clutching a swastika in its talons. The sculpture adorned the stern of the Graf Spee, the pride of the German navy.

A salvage team led by two Uruguayan brothers, Alfredo and Felipe Etchegaray, filed for permission to search for the eagle in 1997.

The team welcomed the ruling, which said the sculpture must be sold in 90 days.

The Graf Spee's captain, Hans Langsdorff, scuttled the battleship on December 17, 1939 following the Battle of the River Plate.

The Nazi ship, one of the Third Reich's largest battleships, briefly sought sanctuary in Montevideo's harbor from two British ships and a New Zealand battleship that were seeking to sink the Graf Spee.

After sailing out of the harbor, Langsdorff ordered the Graf Spee scuttled -- he apparently fell for a ruse designed to convince him a large British naval force was awaiting him in international waters.