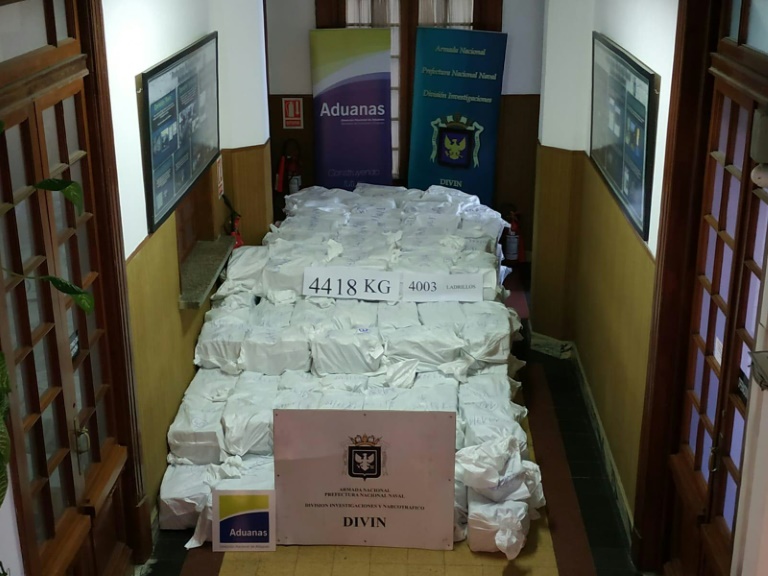 Uruguayan authorities seized a record haul of 4.4 tonnes of cocaine at the port of Montevideo in what the navy described Friday as "the biggest blow to drug trafficking in the country's history."

In a joint operation between the navy and customs, four soy flour containers packed with bags of cocaine were seized after showing "anomalies" when put through scanners at Montevideo's port.

In the first two containers investigated, "a total of 4,418 kilograms (of cocaine) corresponding to 4,003 bricks" was found, the navy said in a statement.

Uruguay's customs director Jaime Borgiani estimated the drugs would be worth a billion US dollars in the European market.

Uruguay is increasingly being used as a transit point for Latin American-produced cocaine heading to Africa and Europe.

The previous record was three tonnes found in a container destined for Africa at Montevideo's port in November.

It is not known where this cocaine haul originated, but Borgiani said it "was loaded" onto trucks on Tuesday at a ranch in the south-western Soriano department, 290 kilometers (180 miles) from Montevideo.

The seizure came after authorities swooped in on a new local exporter that had raised suspicions.

The interior ministry said on Twitter that police had raided the ranch where the cocaine was loaded, arresting the owner and his son. It added that a quantity of unspecified drugs was also confiscated.

"The important thing is to show the world and drug traffickers that you don't mess around with Uruguayan customs," said Borgiani.

"We've taken the necessary steps to rid the country of this scourge."

"The drug has been detected in four scanned containers," added Perona.

Local media said the containers were due to be loaded onto an Italian-registered ship.

The soy flour containers were destined for Lome, the capital of Togo.

Authorities are questioning the soy company owner, export agent and truck drivers who brought the merchandise to the port.

In August, German customs seized 4.5 tonnes with an estimated street value of $1.1 billion from a container that arrived in Hamburg from Uruguay. The manifest said the container carried soybeans.

In August, one tonne of cocaine was found in an eastern Uruguay seaside town.

That came after France in mid-May confiscated 600 kilograms of remarkably pure cocaine from a private jet that had arrived from Uruguay.

Colombia, Peru and Bolivia are the largest producers of coca leaf, the primary ingredient in cocaine.