WORLD US accused of blocking UN climate talks amid protests

US accused of blocking UN climate talks amid protests

The United States despite withdrawing from a landmark accord aimed at curbing climate change is stonewalling vital UN talks over how to fund poorer nations as they battle against global warming multiple sources told AFP Saturday. 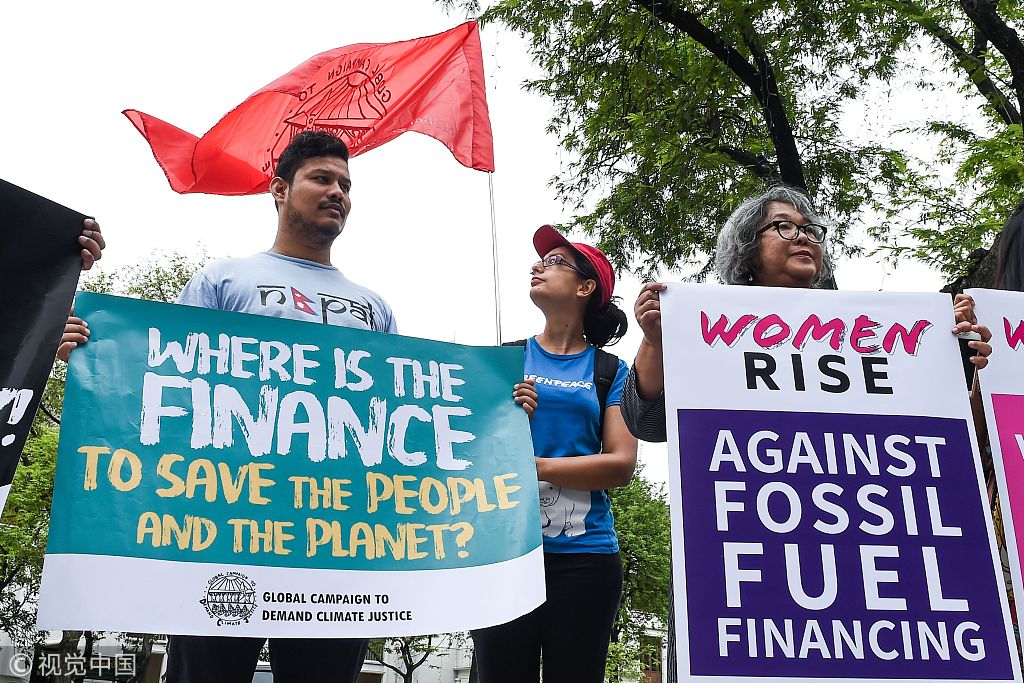 Environmental activists display placards during a demonstration in front of the United Nations building, where experts from across the planet locked in key talks aimed at breathing life into the Paris Agreement on climate change, in Bangkok on September 8, 2018. (Photo: VCG)

US President Donald Trump caused global outrage by announcing the US would withdraw from the Paris Accord,but the decision cannot formally take effect until least 2020 and Washington has vowed to take part in climate negotiations to protect its interests.

The issue of how funds are made available to developing nations has emerged as a key sticking point at the talks which have made little headway since they opened on Tuesday.

The Paris deal -- hailed as a game-changer when struck in 2015 -- promised $100 billion annually from 2020 to poor nations already coping with floods heatwaves and rising sea levels exacerbated by climate change.

But it left room for debate over how that money should be provided, as well as how donor nations would source and report their contributions.

Washington has tabled a proposal with support from Japan and Australia that seeks to remove rules on how countries account for their climate action funding, sources close to the negotiations told AFP.

This would mean that developed economies -- responsible for the lion's share of planet-warming-feeding carbon emissions -- could still count commercial loans and pre-existing state funding as part of their finance obligations.

Observers in Bangkok said the US and some other developed economies were also refusing point blank to discuss the contentious issue of how rich nations inform other states of their future funding plans.

A State Department spokeswoman declined to comment when contacted by AFP.

The US position is starkly at odds with that of the developing nations, which insist that transparent and predictable finance is needed to effectively plan investment in new technologies and carbon reduction.

A senior climate negotiator told AFP that the US delegation in Bangkok was "poisoning" discussions aimed at creating a clear roadmap to implementing what nations agreed in the Paris deal.

"The US is no longer playing the game but it's still setting the rules," said the negotiator, who spoke on condition of anonymity.

Another head negotiator accused the US and other developed nations of seeking to move the goalposts agreed in Paris.

"It is clear to us that there is no goodwill and willingness to advance on matters of upmost importance to developing countries," said Majid Shafie-Pour, head of a developing country bloc that includes China.

Activists rounded on the US, accusing Washington of endangering hard-earned gains on a global initiative to stop runaway global warming.

"The role of the US negotiators at the talks is actively hindering progress at this critical stage," Harjeet Singh, the global lead on climate change for pressure group ActionAid, told AFP.

He also accused other negotiating blocs, including the European Union, of "standing on the sidewalk" by failing to stand up for developing countries.

The Paris agreement, struck in December 2015, aims to limit global temperature rises to "well below" two degrees Celsius by 2100, shooting for no more than a 1.5C increase if at all possible.

Talks in Bangkok, which wrap up Sunday, aim to narrow down options to present to ministers and heads of state at the COP 24 climate summit in Poland in December.

Experts warn that the world is running out of time to prevent catastrophic temperature rises.