WORLD US accused of double standards on rights

US accused of double standards on rights 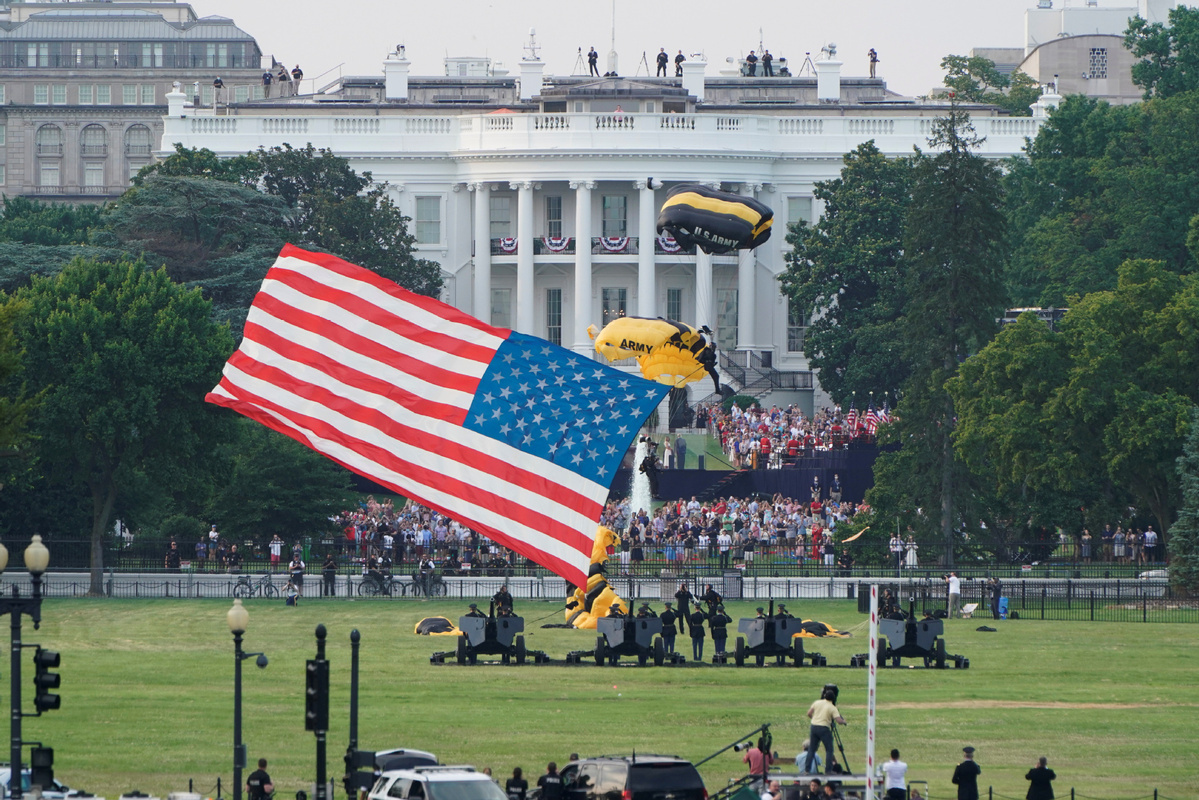 US Army Golden Knights paratroopers land on the Ellipse with a US national flag during Independence Day celebrations in Washington, US, July 4, 2020. (Photo: Agencies)

The United States is displaying its double standards as it interferes in the internal affairs of other countries despite being unable to deal with problems related to racism on its own shores, a Russian political observer has said.

Andrey Kalachinsky, a political commentator in Vladivostok, in Russia's Far East, shared his views in a post on the news website Vladnews in June.

The piece headlined Double standard: get and role, focused on the double standards, especially related to issues concerning Russia and China, saying the US was using them as tools to shift focus away from its own problems.

Now the movement against racism in the US, after the death of George Floyd, under the slogan "Black Lives Matter" is not peaceful, but has descended into rioting in many places, he said, adding that the campaign which had spread to more than 40 cities and led to about 10,000 people being arrested, had also claimed more than 20 lives.

The marches were violent as these protesters took over buildings, smashed shops in the cities' downtown areas, blocked roads and clashed with the police, he said.

Pointing to how bad the situation had become, he said that in late May, US President Donald Trump had requested local governments to restore order, and urged states to call in the National Guard.

But even as US politicians dealt with domestic chaos, they did not miss an opportunity to take aim at China and Russia, Kalachinsky said.

He said that while the US continued to accuse Russia of interference in the last US presidential election, it also tried to link the protests in the US with China without any proof.

US Secretary of State Mike Pompeo even called the protests "callous attempts by the Chinese Communist Party to exploit the tragic death of George Floyd for its own political gain".

Separately, he said in a tweet on June 6: "During the best of times, Beijing ruthlessly imposes communism. Amid the most difficult challenges, the United States secures freedom."

Pompeo is not being rational about this, Kalachinsky said.

"Is violence in the street and looting of stores a guarantee of freedom?

"What do those Americans who have suffered from such 'freedom' think about this?"

Referring to other US actions, he said the country had adopted special laws and imposed sanctions against Chinese officials, companies and institutions in relation to its criticism of China's human rights situation and its policies in the Xinjiang Uygur autonomous region and Hong Kong Special Administrative Region. And Trump signed the so-called Uyghur Human Rights Policy Act of 2020 on June 17, besides receiving a Senate bill about sanctions on China on Thursday, after China passed the Law of the People's Republic of China on Safeguarding National Security in Hong Kong.

Commenting on these actions, Kalachinsky said this was not the first time that the US was showing its double standards toward China, stressing that the US had no right to target others as it treated its citizens with a different skin color as well as foreigners unfairly.

With regard to the 5G issue, Kalachinsky said: "It is clear that China leads the research and development for the new 5G communications technology, and the deputy chair of the board of Chinese company Huawei, Meng Wanzhou, was detained in Canada at the request of the US. And the search for Chinese spies at all universities in the US has not produced any results.

"Again, the US is following double standards on cybersecurity issues while spying on politicians around the world and intercepting information. According to Edward Snowden and WikiLeaks, they even listened to German Chancellor (Angela) Merkel."

On the Hong Kong law, Kalachinsky said that Carrie Lam Cheng Yuetngor, the special administrative region's chief executive, had said that the US criticizing China for adopting a law to protect the safety and stability in its own territory "shows double standards".

According to her, the governments of some countries show much seriousness about protecting their national security, but view a law for HKSAR's protection as biased, which is clearly a manifestation of double standards.

The same double standards appear in US policy toward various "revolutions" and the "Arab Spring", Kalachinsky said, adding: "According to the Americans, revolutions are justified even when a legitimate government is overthrown. But this looks ridiculous when we see the current situation in the United States.

"Now the National Guard is attempting to suppress rallies by force, using riot gear and tear gas. And armored vehicles are used. There are deaths and injuries, and more than 9,000 people are detained. And the US president has threatened to use the right to send federal troops to cities."

Referring to the various "revolutions" backed by the US, Kalachinsky said that the US clearly applies double standards when it calls itself a "defender of human rights" and waves its hands in front of other countries, judging them, interfering in their internal affairs on the pretext of protecting human rights, Kalachinsky said.