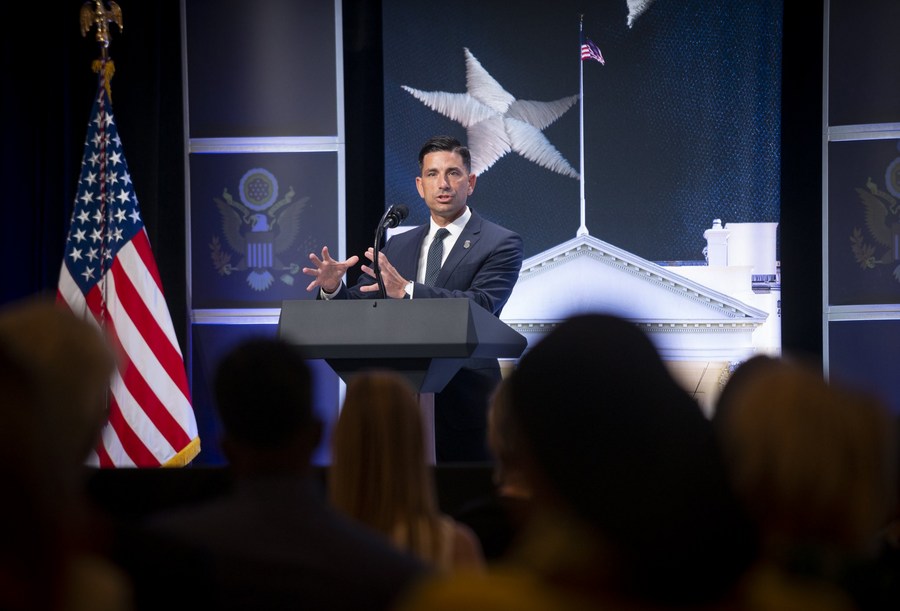 Photo uploaded on Aug. 21, 2020 to the Twitter account of Chad Wolf shows that he is delivering a speech to his audience. (File Photo: Xinhua)

The Senate has not approved Wolf's nomination since Trump tapped him to lead the Department of Homeland Security (DHS) in November 2019, confining him in an acting role heading the department for 14 months.

Wolf said in a letter to the DHS that his resignation "is warranted by recent events, including the ongoing and meritless court rulings regarding the validity of my authority as Acting Secretary."

"These events and concerns increasingly serve to divert attention and resources away from the important work of the Department in this critical time of a transition of power," wrote Wolf, whose resignation is effective just before midnight.

The official said he was "saddened to take this step, as it was my intention to serve the Department until the end of this Administration."

Wolf said in the letter that he will be replaced by the head of the Federal Emergency Management Agency, Pete Gaynor, who will also serve in an acting capacity.

Wolf's resignation came as the fallout of pro-Trump demonstrators' breach of Capitol Hill last week compelled a growing number of administration officials to resign. He was the third cabinet member to step down, following Transportation Secretary Elaine Chao and Education Secretary Betsy DeVos.

Wolf didn't directly mention the Capitol siege in his resignation letter, but he condemned the rioters on Jan. 7 for their "unconscionable" violence, one day after they stormed the Capitol building to disrupt Congress's certification of the 2020 presidential election results.

While explicitly calling Trump supporters' acts "unacceptable," Wolf said then that he intended to remain in his post.

As Wolf's successor, Gaynor is now in charge of overseeing federal and state security preparations for the inauguration of President-elect Joe Biden on Jan. 20. It is no easy task, given that the Federal Bureau of Investigation has warned about planned protests in both state capitals and Washington, D.C., in the lead-up to the event.