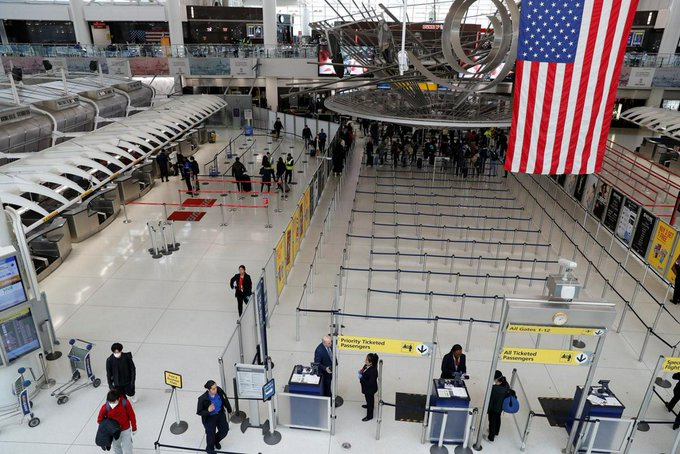 Washington (People’s Daily) - The White House expanded its travel ban to passengers from the UK and Ireland on Saturday in a further attempt to curb the spread of the pandemic. Such restrictions on air travel haven’t been seen since Sept. 11, 2001.

The US had previously issued travel bans on nationals from the 26 countries in the Schengen Area free movement zone, which does not include Ireland or the UK.

US President Trump, while announcing the new ban, said he was also looking at the possibility of domestic travel restrictions as well.

“We are looking at it very seriously, yeah, because they’ve had a little bit of activity unfortunately,” Trump said at a White House briefing when being questioned about the European travel ban. “So we’re going to be looking at that -- we actually already have looked at it and that is going to be announced.”

Asked if he was considering any domestic travel restrictions, Trump said, "Yes, specifically from certain areas."

"We're working with the states and we're considering other restrictions, yes," he said.

The move is sure to push airlines further into crisis after they have been struggling financially for weeks amid a steep slump in passenger demand, with more canceled flights than new bookings for April and May. For instance, Delta Air Lines announced a massive cut on Friday by slashing 40 percent of its flight capacity, which marks the steepest in Delta's history including the aftermath of the 2001 terrorist attacks.