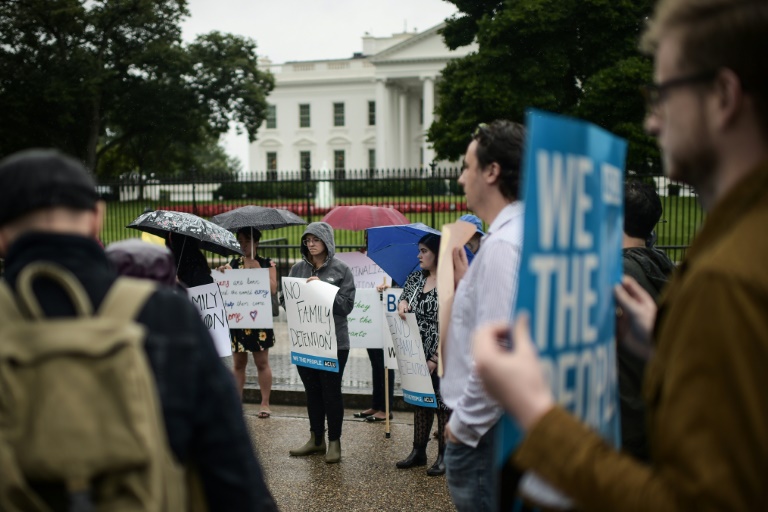 Activists gather outside the White House to protest children being separated from their families at the US-Mexico border.(Photo: AFP)

A US task force has been set up to reunify migrant families broken up at the Mexican border under President Donald Trump's "zero tolerance" immigration policy, a report said.

US Secretary of Health and Human Services (HHS) Alex Azar issued an order Friday to create the reunification task force, the Politico website reported, citing an internal document it had obtained.

Reflecting the breadth of the challenge, the document orders the department's preparedness and response office -- which deals with emergencies and public health disasters -- to assist its refugee resettlement office with the effort.

Politico quoted HHS spokesperson Evelyn Stauffer as saying that Azar was "bringing to bear all the relevant resources of the department in order to assist in the reunification or placement of unaccompanied alien children and teenagers with a parent or appropriate sponsor."

The department did not immediately respond to an AFP request for confirmation.

Issuing his order to end the splitting up of parents and children, Trump said: "I didn't like the sight or the feeling of families being separated."

But Democratic lawmakers kept up the pressure Saturday, again touring some of the detention facilities where the children are being held, CNN reported.

It remains unclear how quickly reunifications can be carried out. Lawyers working to reunite families said they were struggling to navigate a labyrinthine process.

The separations have reportedly sparked intense debate even within the White House and given rise to confusion about the road forward.

The Pentagon is making contingency plans to house tens of thousands of migrants on US military bases.

But Trump has remained unapologetic, suggesting that Democrats were exaggerating the problem for political gain.

"We must maintain a Strong Southern Border. We cannot allow our Country to be overrun by illegal immigrants as the Democrats tell their phony stories of sadness and grief, hoping it will help them in the elections," he tweeted.