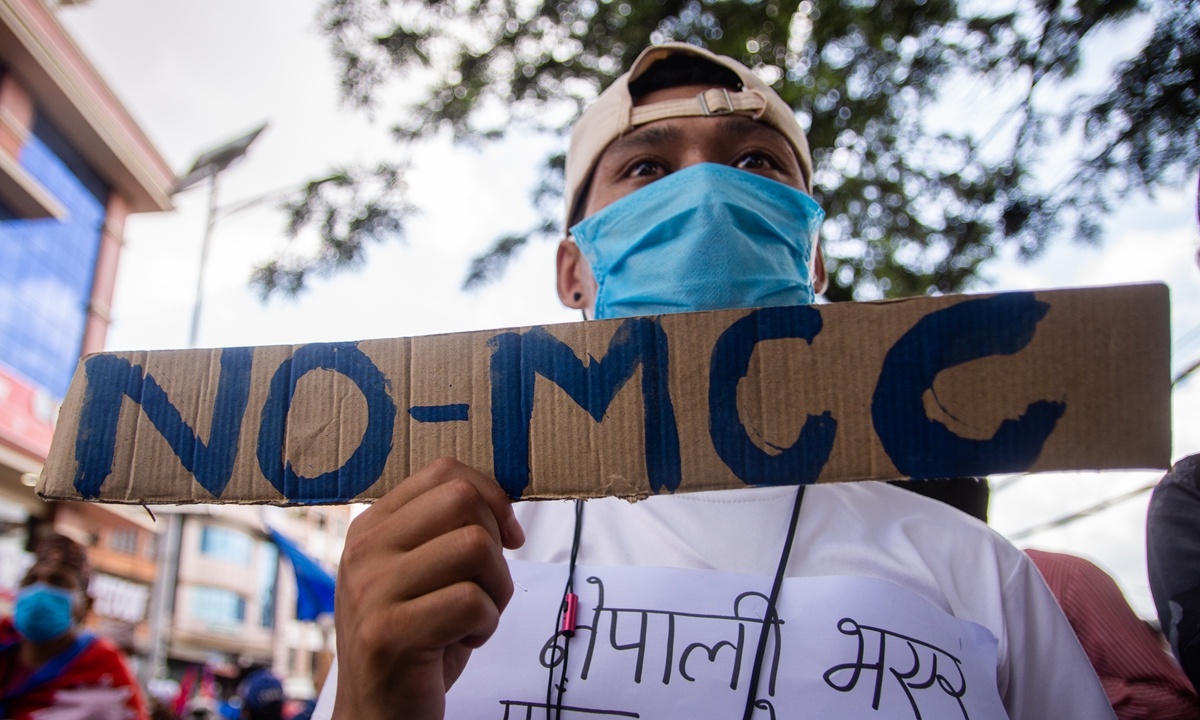 A Nepalese youth holds a cardboard sign during a protest against Millennium Challenge Corporation (MCC) programs in Kathmandu, Nepal, on June 27. (Photo: AFP)

The prospects for underdeveloped countries have diminished under US aid program agency Millennium Challenge Corporation (MCC) as the US’ true intentions – expanding national interests and strategy under financial aid pretences – have become crystal clear.

Widely seen as part of the US' Indo-Pacific Strategy's push to further contain China, the MCC has been called a tool of modern imperialism.

The MCC is a US agency that provides assistance to lower-income countries that can only "qualify" if they "demonstrate a commitment to just and democratic governance, investments in its people, and economic freedom," according to MCC's selection rules.

Though self-proclaimed as an "independent agency," the MCC was in fact established by the US Congress in 2004.

Observers have revealed its state-controlled nature and called it one of the world's high-profile and large-scale state-owned enterprises (SOE) considering its relationship to the US power structure.

The MCC Board of Directors is comprised of the US secretary of state (Chair), secretary of the treasury, US trade representative, administrator of USAID, CEO of MCC, and four private sector members appointed by the US president with the advice and consent of the Senate.

As of October, the MCC has completed 73 compacts and threshold programs in 49 countries and regions across Africa, Asia, Eastern Europe, Latin America, and the Pacific. But many in those countries have complained about the MCC's political interference.

Critics call these criteria, in the name of advocating "democratic rights," strict and say the evaluation process is largely driven by US diplomatic interests. The process may allow the US to encroach on the sovereignty of recipient countries by interfering in their internal affairs, or to force some countries seeking economic relief to make reforms directed by the US, observers warned.

The MCC may suspend or terminate the compact if it determines that the partner country is engaged in activities which are contrary to US national security interests or has engaged in actions inconsistent with the criteria used to determine eligibility.

"The MCC intends to protect US national interests and expand its national strategy. In its run, the economic interests are secondary while political interests are the top priority," Zhou Zhanggui, a researcher in non-traditional security and peaceful development studies from Zhejiang University, told the Global Times.

The MCC tends to target developing countries whose political rights and systems are in transition. The MCC's strict evaluation criteria demonstrate how the US is eager to export its ideological logic bonded with financial aid, and it eventually forces recipient countries to carry out political reforms to align with US interests, said Zhou. Conversely, political changes that are not in US interests may bring aid to a halt. Nepalese protest against the MCC compact in Kathmandu on June 3. (Photo: Courtesy of a local observer)

The Sri Lankan government decided not to sign the $480 million MCC agreement with the US on February 28, taking into consideration the recommendations of a committee of local experts that found some of its features as a threat to the welfare and national security of the island nation. Some residents claimed the MCC program was a new type of imperialism seeking economic hegemony over developing countries, local media reported. Some local people were concerned the contract would turn Sri Lanka into a new colony or even a host nation for a US military base.

There were clauses and conditions in the agreement negatively affecting Sri Lanka's national goals and objectives, sovereignty, and national security, and were inconsistent with the legal framework and Constitution, the Daily Financial Times quoted Sri Lankan Trade Minister Bandula Gunawardena as saying on February 29.

The headwinds the MCC faces in Sri Lanka resemble similar disputes over its contracts in Nepal. Aid flow has stopped in Nepal as the local government has not ratified the program. A section of ruling Nepal Communist Party leaders claim the program is part of the US-led Indo-Pacific Strategy aimed at "containing China," the Kathmandu Post reported in August.

"There were many protests in Kathmandu against MCC. Even during the lockdown period, people came to the streets and protested saying that the MCC is totally against the sovereignty," Shristi Kafle, a Kathmandu-based journalist, told the Global Times.

Similarly, Philippine officials have criticized the US for delaying decisions on MCC aid programs under the pretext of "human rights" because the US demands countries accept conditions. In December 2017, the Philippines opted out of the MCC's second-cycle aid package.

"You cannot just simply (say) that ...'we would like to give this to you but you have to toe the line insofar as our policy is concerned,'" said Philippines' then-Foreign Secretary Perfecto Yasay Jr., who also expressed that the Philippines had long called for being respected and treated as an equal sovereign country in cooperation with the MCC.

Yasay said US hesitation and stalling of the second round of aid followed Philippine President Rodrigo Duterte's declaration to chart an independent foreign policy away from the US.

Zhou said that suspended or abandoned MCC programs due to host countries' ineligibility to meet with US requirements may inflict further damage on countries with weak economies, and waste time and resources.

Moreover, in 2016, the MCC announced to suspend its partnership with Tanzania amid deteriorated relations after the MCC claimed the Tanzanian presidential election "was neither inclusive nor representative." The suspension was a blow for Tanzania's efforts to bring electricity to more people as the agreement promised, BBC reported.

Tanzanian President John Magufuli regarded the termination as an opportunity to get rid of donor dependence for Tanzanians. Critics said this arbitrary action by the US was "moralistic and hypocritical," said Cooke Jennifer G, director of the Washington-based Africa Program at the Center for Strategic and International Studies. "The ball is in Tanzania's court. Examples from other MCC countries suggest that Tanzania will have to back down in order to get reinstated," she noted.

Zhou stressed that the MCC serves as a tool to facilitate the US' ideological and political blueprint into other countries. The MCC's meddling in other countries' internal politics will harm their already vulnerable social stability and exacerbate turmoil.