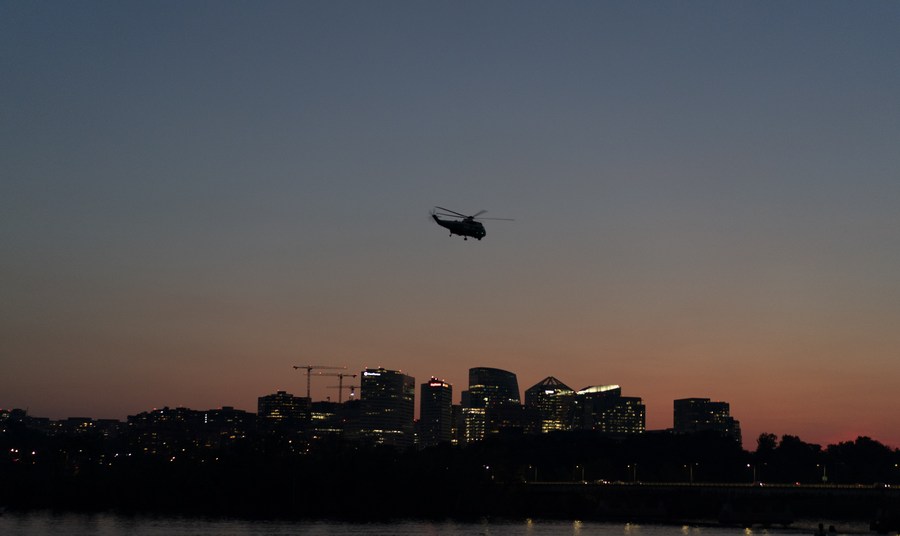 A helicopter of the U.S. Air Force was shot while flying over the state of Virginia on Monday, injuring one of the two pilots on board and prompting an investigation by the Federal Bureau of Investigation (FBI), multiple U.S. media reported Wednesday citing Air Force and FBI officials.

McClatchy, the news outlet that first reported the incident, said the UH-1N Huey helicopter was flying about 1,000 feet off the ground, about 10 miles northwest of Manassas Regional Airport in northern Virginia when the incident occurred, forcing the workhorse aircraft to make an emergency landing at the airport.

"Initial findings are that the helicopter was struck by a bullet resulting in a minor injury to an aircrew member and damage to the aircraft," McClatchy cited the Air Force as saying in a statement.

The wounded crew member "sustained a non-threatening injury, for which he was treated and subsequently released from the hospital," according to a separate statement from the FBI Washington Field Office (WFO).

The investigative body of the Air Force and the FBI were involved in an ongoing investigation into the incident.

"A UH-1N Huey helicopter assigned to the 1st Helicopter Squadron at Joint Base Andrews conducted an emergency landing at 12:43 pm on August 10th in Manassas, Va during a routine training mission," read a statement by the U.S. Air Force 316th wing, the host wing at Joint Base Andrews, which is also home to the presidential aircraft Air Force One.

"The Office of Special Investigations is fully engaged with our FBI colleagues on this incident. OSI take threats to our Airmen and our resources very seriously. As this is an ongoing investigation, no further investigative details can be released at this time," it added.

The WFO said in its statement that it has dispatched its Special Agents and its Evidence Response Team to Manassas Regional Airport to conduct the investigation, while asking those near the scene when the incident happened to share information with the agency.