WORLD US Air Force preparing B-52 bombers for nuclear attack

US Air Force preparing B-52 bombers for nuclear attack

Washington - Though Laura M. McAndrews, an Air Force representative denied a report that B-52 bombers rigged with nuclear weapons are being prepared for 24-hour alert on October 23, Gen. David Goldfein, the Air Force's chief of staff, told security news website Defense One that the preparations were already underway. If the bombers were to be put on 24-hour alert, it would be the first time since the end of the Cold War in 1991. 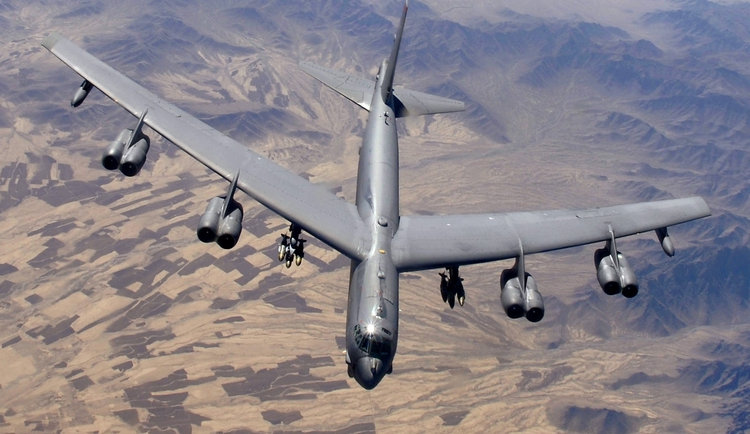 File Photo: The B-52 bomber(Global Times)

According to a report released by Defense One, Goldfein said US military leaders are reacting to new threat levels,"The world is a dangerous place and we've got folks that are talking openly about use of nuclear weapons.”

"This is yet one more step in ensuring that we're prepared," Goldfein said during a tour of Air Force bases home to nuclear bombers, according to Defense One,"I look at it more as not planning for any specific event, but more for the reality of the global situation we find ourselves in and how we ensure we're prepared going forward."

"We do this routinely as part of our organize, train and equip mission so our forces are ready to respond when called upon." McAndrews denied the report and said that updates to base infrastructure "are necessary to maintain a baseline level of readiness.”

But according to Defense One, the US Air Force is preparing its fleet of B-52 nuclear-capable bombers for 24-hour alert at Barksdale Air Force Base in northwest Louisiana. The Air Force Base is home of the Bomb Wing and Air Force Global Strike Command, which manages the nuclear services, is being renovated, so that B-52s would be ready to “take off at a moment's notice.” reported by Defense One.

The B-52, which can fly up very high and at subsonic speeds, has the ability to release a variety of weapons, including cluster bombs, gravity bombs and precision guided missiles. The long-range bomber can also unleash both nuclear and precision-guided conventional ordnance.