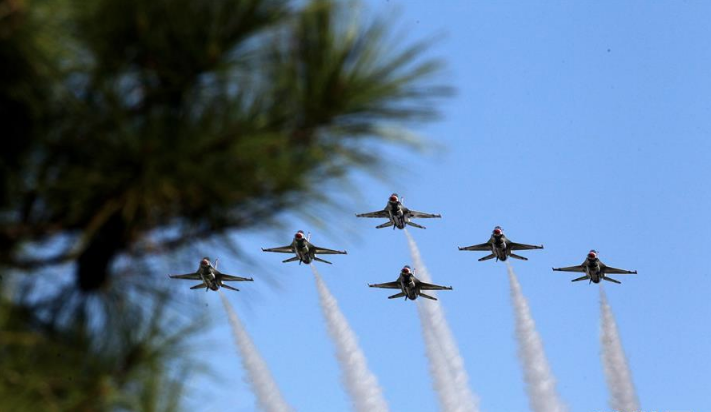 LOS ANGELES, April 18 (Xinhua) -- The US Air Force Air Demonstration Squadron, also known as the Thunderbirds, performed a flyover on Saturday in the western state of Colorado to salute the frontline COVID-19 responders.

The F-16 aircraft of the Thunderbirds started at noon in Greeley and wound south to Pueblo over what is estimated to be a one-hour flyover, according to the flight path announced by the Air Demonstration Squadron.

Local television showed that six F-16 Fighting Falcons in formation, with two others trailing, flew over Fort Collins and other cities in the Centennial State.

The Thunderbirds reminded that local residents should observe the flyover from the safety of their home-quarantine and should maintain social distancing and avoid gatherings amid the pandemic.

"Our team is honored to extend our heartfelt gratitude to the countless Coloradans working every day to support their communities during this difficult time in our nation," said Lt. Col. John Caldwell, Thunderbirds commander and leader, in a statement posted on the Air Demonstration Squadron's official website.

"We want Coloradans to look up from their homes and enjoy the display of American resolve and pride while keeping frontline responders in their hearts," he added.