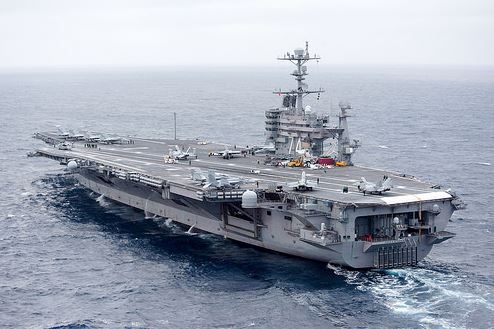 A US aircraft carrier sailed into the Persian Gulf on Friday, becoming the first since America’s withdrawal from the Iran nuclear deal and breaking the longest carrier absence in the volatile region since at least the Sept. 11 terror attacks.

The arrival of the USS John C. Stennis comes as Iranian officials have returned to repeatedly threatening to close off the Strait of Hormuz, the narrow mouth of the Persian Gulf through which a third of all oil traded by sea passes. Iranian Revolutionary Guard vessels shadowed the Stennis and its strike group, at one point launching rockets away from it and flying a drone nearby.

The long absence of a carrier, however, could become a standard practice here as now-outgoing Defense Secretary Jim Mattis sought to shake up naval operations and American air bases spanning the region that can scramble fighter jets and drones.

The Navy invited journalists to ride on the nuclear-powered Stennis, whose homeport is Bremerton, Washington, as it transited the Strait of Hormuz. The strait at its narrowest point is 33 kilometers (21 miles) wide, in the waters between Iran and Oman.

Despite being so narrow and within the territorial waters of those two nations, the strait is viewed as an international transit route. American forces routinely travel through the area, despite sometimes tense encounters with Iran’s Revolutionary Guard, a paramilitary force answerable only to Supreme Leader Ayatollah Ali Khamenei. For Iran’s part, they compare the American presence to Tehran sending warships to the Gulf Mexico.

Tensions have been high since President Donald Trump’s May withdrawal from Iran’s nuclear deal, which saw sanctions lifted for Tehran limiting its uranium enrichment. Iranian President Hassan Rouhani, a relative moderate within the country’s Shiite theocracy whose major achievement was the deal, has repeatedly warned any attempt to stop Iran’s export of crude oil could see it close off the strait.

However, the 5th Fleet says it has not seen any “unsafe and unprofessional” actions by Iranian naval forces in the Persian Gulf since August 2017 before the Stennis’ transit through the strait.

Throughout its trip Friday, some 30 Iranian Revolution Guard vessels trailed the Stennis and its strike group. One small vessel launched what appeared to be a commercial-grade drone to film the American ships. Photographers and videographers on the Iranian boats could clearly be seen also filming the Stennis while journalists on board the aircraft carrier filmed them.

“The Iranian craft drove in front of our ship and stopped . and tried to capture their own sort of picture of what was going on,” said Capt. Randy Peck, the commanding officer of the Stennis.

There was no immediate mention of the Stennis’ arrival to the Persian Gulf in Iranian state media.

It represents a change in US military strategy dating back to the first Gulf War in 1991 and the overflights of Iraq that followed for years after. Mattis, as the head of the US military’s Central Command, himself demanded two carrier groups in the Persian Gulf as he led the wars in Iraq and Afghanistan.

Since then, Mattis has said he wants a more unpredictable Navy to respond to Russia and China, which he sees as the “great power competition” America now faces.

“The way you do this is we ensure that preparation for great power competition drives not simply a rotation schedule that allows me to tell you, three years from now, which aircraft carrier will be where,” Mattis told a US House committee in April. “That’s a great way to run a shipping line. It’s no way to run a Navy.”

It’s unclear, however, whether Mattis’ strategy will continue. The defense secretary resigned Thursday after clashing with Trump over the abrupt withdrawal of US troops from Syria.

The US military also operates air bases in Qatar and the United Arab Emirates, as well as a major Army base in Kuwait and Navy base in Bahrain. That offers the American military a variety of locations both in the Persian Gulf, as well as other bases in the wider Mideast, to launch strikes.

“Carriers were needed to support many of the initial strikes in Afghanistan in 2001, some attacks in Iraq in 2003, and most tactical missions in Syria in 2011,” said Bryan Clark, a senior fellow at the Washington-based Center for Strategic and Budgetary Assessments. “After access to adequate ground bases was obtained for today’s operations in Syria and Iraq, carrier-based aircraft were not as essential for these missions.”

“The US does not need carriers in the Persian Gulf,” he added.

As military operations wind down in Afghanistan, Iraq and Syria, that likely will mean less need for airstrikes as well. However, the 5th Fleet still maintains a fleet of 21 ships from Bahrain and other Navy ships will continue to transit the strait.

“The American Navy is showing they’re committed to regional stability all across the globe but particularly in the Gulf region,” Peck said. “It’s a very economically important area for the entire world, so we’re going to continue to go wherever we can internationally, in international waters.”