US and Turkey agree to mend ties; Turks propose joint deployment in Syria 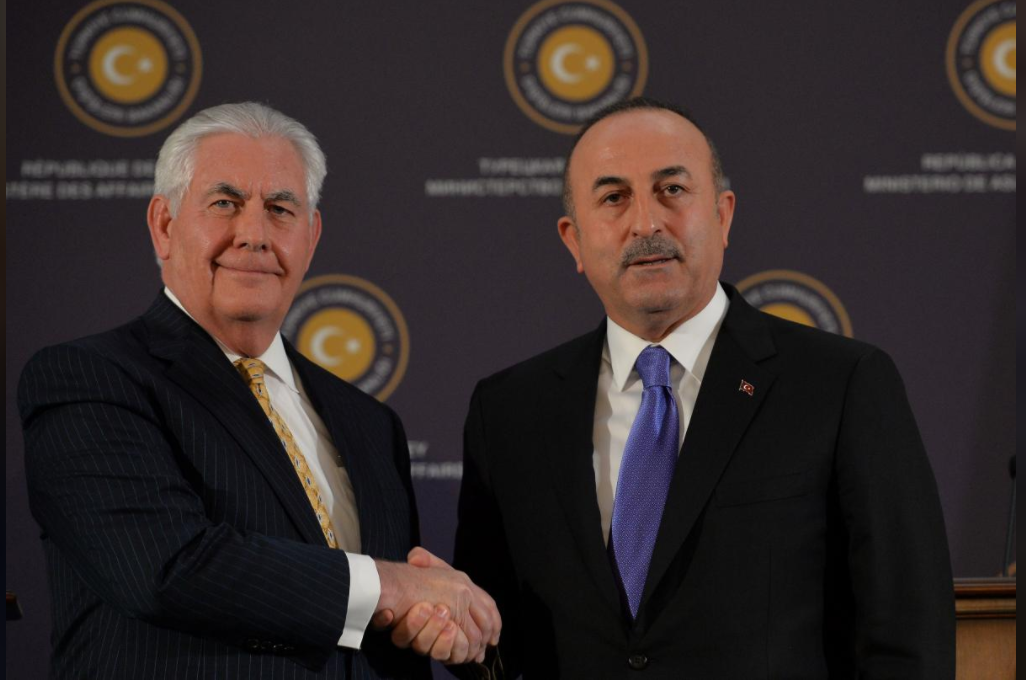 Turkey proposed on Friday staging a joint deployment with US troops in Syria, as the two NATO allies sought to rescue a rapidly deteriorating strategic relationship that Washington acknowledged had reached a “crisis point”.

US Secretary of State Rex Tillerson met President Tayyip Erdogan during a two-day visit that followed weeks of escalating anti-American rhetoric from the Turkish government.

Relations between Washington and its main Muslim ally in NATO have been strained to the breaking point by several issues, above all Turkey’s anger over US support for the Syrian Kurdish YPG militia, which Turkey sees as terrorists.

Turkey launched an air and ground assault last month in Syria’s northwest Afrin region to sweep the YPG away from its southern border. The United States has armed, trained and aided YPG fighters with air support and special forces, as the main ground force in its campaign against Islamic State.

“We find ourselves at a bit of a crisis point in the relationship,” Tillerson acknowledged at a news conference after meeting with Foreign Minister Mevlut Cavusoglu on Friday morning. He had met with Erdogan for a more than three-hour discussion on Thursday night.

The United States has no troops on the ground in Afrin, where the Turkish offensive has so far taken place. But Turkey has proposed extending its campaign further east to the town of Manbij, where US troops are based, potentially leading to direct confrontation with US-backed units.

In a proposal aimed at overcoming the allies’ stark differences over Syria, a Turkish official told Reuters that Turkey had proposed that Turkish and US forces could deploy jointly in Manbij.

Such a deployment could take place only if YPG fighters first withdrew from Manbij to positions on the opposite bank of the nearby Euphrates river, the official said. That condition repeats a long-standing demand of Turkey, which says Washington broke a promise that the YPG would withdraw from Manbij once Islamic State fighters were defeated in the town.

Neither Tillerson nor Cavusoglu, the Turkish foreign minister, responded directly to a question about the Reuters report of a possible joint deployment to Manbij.

However, Cavusoglu told reporters Turkey would be able to take joint steps with the United States in Syria once the YPG left the vicinity of Manbij.

“What is important is who will govern and provide security to these areas,” he said. “We will coordinate to restore stability in Manbij and other cities. We will start with Manbij. After YPG leaves there, we can take steps with the US based on trust.”

He also said the two countries had created a “mechanism” for further talks and would meet again by mid-March.

Tillerson said issues around Manbij would receive priority in the talks, and said he accepted that Washington had not yet fulfilled some promises to Turkey, without giving details.

“The United States made commitments to Turkey previously, we’ve not completed fulfilling those commitments. Through the working group, we’re going to address that and Manbij is going to receive priority,” he said.

“But it’s not just Manbij. We have to think about all of northern Syria,” Tillerson said.

Tillerson said he recognized Turkey’s legitimate right to defend its borders, but called on Ankara to show restraint in the Afrin operation and avoid actions that would escalate tensions in the area.

Erdogan’s anti-American rhetoric, a year before presidential and parliamentary elections, has resonated in a country where 83 percent of people view the United States unfavorably, according to a poll published this week by the Centre for American Progress.

Turkey has detained some US citizens, including a pastor, as well as some Turkish staff working for the US consulate, over suspected links to a 2016 failed coup. That prompted both countries to temporarily suspend visa services to each other.

“We continue to have serious concerns about the detention of local employees of our mission in Turkey, and about cases against US citizens who have been arrested under the state of emergency,” Tillerson said.

More than 50,000 people have been detained and more than 150,000 sacked or suspended from their jobs under the state of emergency ushered in following the failed coup. Turkey says the measures are necessary to protect its security.

Among other issues causing friction in the relationship, Turkey has demanded Washington extradite a US-based cleric that Ankara blames for the failed coup. Last year the United States convicted a Turkish businessman for violating sanctions on Iran in a court case that included testimony alleging corruption by top Turkish officials.

Before Tillerson spoke to reporters in Ankara, a small nationalist party protested outside the venue, waving Turkish flags and chanting “Tillerson, Get Out of Turkey”.