US appoints new special envoy for DPRK to lead negotiations ahead

US State Secretary Mike Pompeo on Thursday named Stephen Biegun to be the new special envoy for the Democratic People's Republic of Korea (DPRK).

The appointment aims to fill key posts regarding the Korean Peninsula so as to facilitate issues like bilateral negotiations over denuclearization, peace regime and economic sanctions, among others. 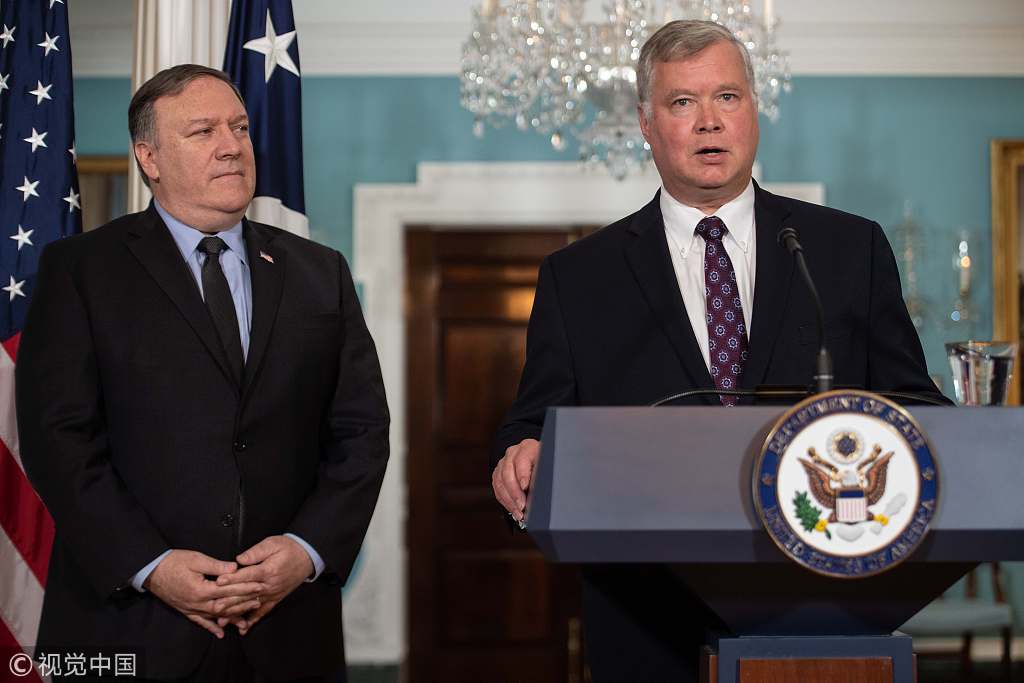 New US special representative to North Korea Steve Biegun speaks after being named by Secretary of State Mike Pompeo (L) at the State Department in Washington, DC, on August 23, 2018. (Photos: VCG)

In a speech to the media at a press conference, Pompeo said Biegun's joining is "timely" as the two of them will travel to the DPRK next week "to make further diplomatic progress towards our objective."

"As the special representative, Steve will lead negotiations and spearhead diplomatic efforts with our allies and partners," Pompeo said, noting that "using diplomacy to resolve the North Korean security threat once and for all remains one of President Trump's greatest priorities, and Steve is eminently qualified for the task and clear-eyed in the challenge before us."

For his part, Biegun said he fully understands the importance of this job.

"The issues are tough, and they will be tough to resolve," he said. "But the President has created an opening, and it's one that we must take by seizing every possible opportunity to realize the vision for a peaceful future for the people of North Korea."

"This begins with the final, fully verified denuclearization of North Korea as agreed by Chairman Kim Jong Un at the summit with President Trump in Singapore," he added.

Biegun is to continue the mission of Joseph Yun, who resigned from his post earlier this year for personal reasons.

US media outlets reported that the departure of Yun, who has been supportive of solving the Korean Peninsula issues through dialogue, was due to his long disappointment over the Trump administration's provocations against the DPRK, and diplomats' lacking of speaking in the government's decision-making process.

Earlier this year, the Trump administration also appointed Harry Harris, former commander of US Pacific Command, to become US ambassador to South Korea.

US National Security Advisor John Bolton said earlier on Aug. 19 that Pompeo would leave for a trip to the DPRK for the fourth visit since he assumed the current office, adding that Washington expects Pompeo to meet with the DPRK's top leader Kim Jong Un.

"To move on with the process of denuclearization remains our highest priority," said Bolton, adding that "it's important that they (the DPRK) demonstrate seriousness" in this regard.

Bolton said earlier last month that Washington has had a plan to dismantle the majority of the DPRK's nuke and ballistic missile programs, and Secretary of State Mike Pompeo will be discussing it with Pyongyang while visiting the country.

Pompeo has visited the DPRK for three times, respectively in April, May and July.

President Donald Trump on Aug. 20 said he would "most likely" meet with Kim for a second time.

He also said that he believed Pyongyang had taken specific steps toward denuclearization, and that he has "great chemistry" with Kim.

In the joint statement after the June 12 Trump-Kim meeting in Singapore, Trump committed to provide security guarantees to the DPRK, while Kim reaffirmed his firm and unwavering commitment to a complete denuclearization of the Korean Peninsula.

The two leaders also agreed to commit to establish new US-DPRK relations, and to build a lasting and stable peace regime on the peninsula.

According to the website of Ford Motor Company, Biegun has been its vice president of International Governmental Affairs, overseeing "all aspects of Ford's international governmental relations, including trade strategy and political risk assessment."

Before joining Ford, Biegun worked in the White House from 2001 to 2003 as executive secretary of the National Security Council. He served as a senior staff member to former National Security Advisor Condoleezza Rice. He also served for 14 years as a foreign policy advisor to members of both the House of Representatives and the US Senate.

Born in 1963, Biegun graduated from the University of Michigan where he studied Political Science and Russian Language. He is a member of the Council on Foreign Relations and the Aspen Strategy Group.

He also named Jim Jeffrey, US former ambassador to Iraq, to be the Secretary's Representative for Syria Engagement, a new position Pompeo created to work on the Geneva Process.

Pompeo is expected soon to appoint another former ambassador, Zalmay Khalilzad, to handle issues related to Afghanistan, US media reported.