US approves plasma to treat virus, global death toll above 800,000

The United States announced an emergency authorization to use blood plasma from recovered coronavirus patients as a treatment for the disease, which has killed more than 800,000 people around the world. 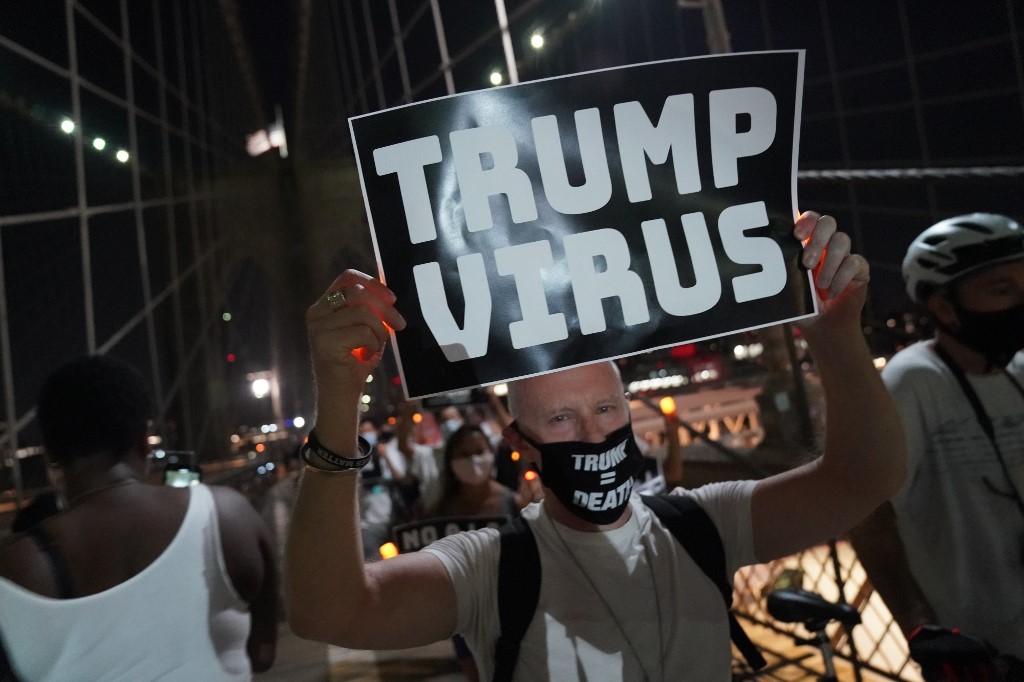 A man holds a placard during the "March for the Dead" across the Brooklyn Bridge, in memory of those who have died of COVID-19 and to protest the Trump administration's handling of the pandemic, on August 21, 2020 in New York. (Photo: AFP)

Many governments around the world are renewing efforts -- including the reimposition of lockdowns -- to contain the virus, which has infected well over 24 million people.

The United States remains the hardest-hit country with more than 176,000 fatalities, and President Donald Trump is under intense pressure to curb the contagion.

The plasma therapy shows "an incredible rate of success" and "will save countless lives", Trump claimed on Sunday -- but that went much further than his own health officials' cautious welcome of the treatment.

Plasma is believed to contain powerful antibodies that can help fight COVID-19 faster, and has already been used on patients in the United States and other countries.

But the extent of its effectiveness is still being debated by experts and some have warned it could carry side effects.

When challenged by a reporter to explain the contradiction between his confidence in the treatment and the caution among experts, Trump passed the question to one of his experts and then ended the press conference.

Trump will attempt to galvanize support at the Republican convention, which starts Monday, as he faces anger over the pandemic and the ensuing economic turmoil ahead of the November presidential election.

In the polls, he is badly trailing Democratic challenger Joe Biden, who slammed the president for "walking away" as the virus ravaged the United States.

Breakneck efforts to develop a vaccine or effective treatments are under way around the world, but until one is available, social distancing measures remain among the few weapons against the virus.

New Zealand on Monday extended the lockdown of its biggest city to Sunday as it battled a small but persistent outbreak.

Auckland went into lockdown on August 12, a day after the virus re-emerged in the city and ended New Zealand's run of 102 days without local transmission.

Strict border controls came into effect in Finland on Monday, with arrivals from just a handful of countries able to enter without virus restrictions.

Indonesian authorities have banned foreign tourists from Bali, a popular holiday destination, for the rest of 2020 -- scrapping plans to open up the island from next month.

'I don't have money to bury her'

The pandemic has devastated the global economy, and policies to reduce the high risk of transmission in large groups of people have impacted everything from sport and religious services to music concerts and elections.

It caused the unprecedented delay of the summer Olympics and Paralympics in Tokyo to next year.

The International Paralympic Committee president Andrew Parsons warned in an interview with AFP that, for the Paralympics to go ahead next year, a guarantee of zero cases was needed.

Some major world sports have resumed but with no spectators.

There was no roar as Bayern Munich on Sunday won the Champions League final -- the biggest game in European club football -- in an empty, 65,000-capacity Lisbon stadium.

Some nations have had to deal with related tragedies as they have enforced virus lockdowns.

At least 13 young people suffocated in a crush during a raid at a nightclub in Peru's capital Lima over the weekend, with people trying to escape through a single exit.

"I found out that my daughter died, asphyxiated, this morning," Gregoria Velasquez, mother of 26-year-old Maryori Salcedo Velasquez, told the America Television channel.