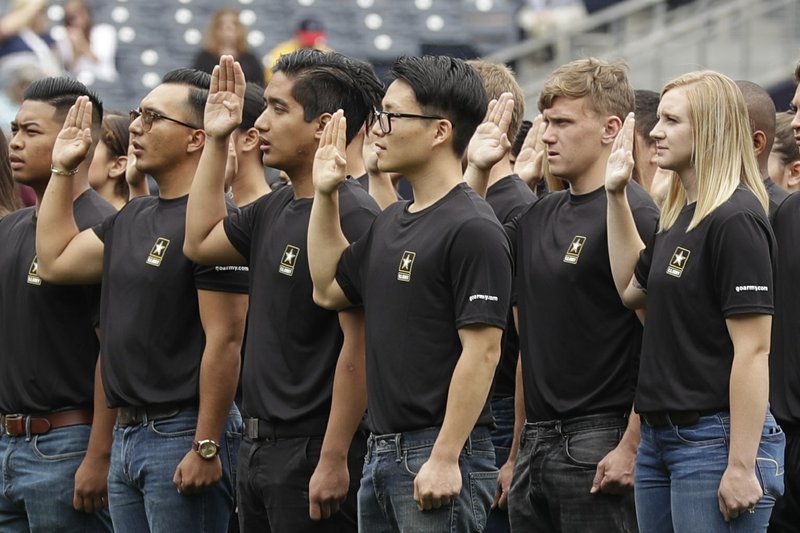 In this June 4, 2017, file photo, new Army recruits take part in a swearing in ceremony before a baseball game between the San Diego Padres and the Colorado Rockies in San Diego. (Photo: AP)

A year after failing to meet its enlistment goal for the first time in 13 years, the US Army is now on track to meet a lower 2019 target after revamping its recruitment effort.

Army leaders tell The Associated Press that they expect to sign up more than 68,000 active duty soldiers for the fiscal year that ends Sept. 30, as the largest branch of the US military increasingly turns to social media and other new online methods to find potential recruits.

Last year, the Army brought in about 70,000 new active duty recruits, well below the 76,500 it needed amid low unemployment and tough competition from higher-paying civilian companies. Meeting the lower 2019 figure is considered a victory for a service that has struggled to compete for young people who are less familiar with the military and that was criticized last year for using more bad conduct waivers and other waivers to meet enlistment goals.

“We’re smoothing out the Army’s growth,” Gen. James McConville, chief of staff of the Army, said in an AP interview. “What we want to do is have modest growth over the next couple of years. And we’re trying to make sure that the end strength we have is high quality.”

Army leaders dispute the idea that they lowered the goal to help meet expectations. Instead, they said they plan to gradually grow the Army from 476,000 members last year to about 490,000 by 2024, seeking more high-quality recruits who will be less likely to fail or get injured in early training.

McConville and Army acting Secretary Ryan McCarthy said that it took time to institute changes in the recruiting over the past year but that the shifts have started to show promise. Already recruiters have an additional 13,000 recruits under contract to join the service in the fiscal year that begins Oct. 1, giving them a jump on next year’s totals.

After a massive buildup to fight the wars in Iraq and Afghanistan, the Army in recent years slashed more than 50,000 soldiers as those conflicts scaled back. Now, to meet military demands, the Army needs to grow again.

But in the effort to enlist more soldiers, Army leaders faced criticism, including from Congress, over the expanded use of waivers for recruits with previous marijuana use, bad conduct and health problems.

The use of waivers triggered worries that the service would repeat mistakes made during the war buildup when recruiters brought in more youth with histories of misconduct, drugs and crime, which led to discipline and behavior problems in the units.

Now Army leaders say they have reduced waivers and improved the quality of recruits.

Maj. Gen. Frank Muth, head of Army Recruiting Command, said there were 3.4% fewer waivers this year and that includes the lowest percentage of conduct waivers in two decades. He said that about 12% of the recruits in 2019 needed a waiver to get in, and less than 9 percent this year needed one.

To meet the recruiting goal while limiting waivers and raising standards, the Army increased the number of recruiters and targeted 22 cities that had historically been challenging areas. And, Muth said, “we have changed from the industrial age into the digital age in how we’re recruiting.”

Historically, the top method of getting recruits has been in person. But young people are now more interested in connecting online than face to face.

As a result, Muth said, “the numbers point to the fact that for the first time the paradigm shift is about to occur and our No. 1 prospecting and lead generation for next year is going to be the in the virtual recruiting station.”

For example, he said, a traditionally top recruiting event like the Houston rodeo would generate about 350 leads for recruiters to follow up. At the Salt Lake City gaming tournament last July recruiters got about 1,400 leads over one weekend, he said.

Two years ago, McCarthy said, the Army spent half of its marketing budget on television ads and half on digital ads. Now, he said, 90 percent is on digital.

“We’re embracing the digital age,” he said, adding that officials are learning as they go along. “You need to touch the same set of eyeballs about six times before they have a conversation with a recruiter.”

The Army also beefed up enlistment efforts in 22 targeted cities this year and improved in 16 of them, including New York, Philadelphia, Los Angeles, McCarthy’s hometown of Chicago and McConville’s hometown of Boston. Recruiters fell short in six others, including Seattle, Miami and Orlando, Florida. But McCarthy said Army leaders plan to keep visiting those cities until the goals are met.

Army officials are hopeful that the Army National Guard and Army Reserves, which also fell far short of their recruiting goals last year, will meet their targets but may not know until the end of the month.