WORLD US Attorney General appointed for his 'loyalty': Trump

US Attorney General appointed for his 'loyalty': Trump

US President Donald Trump said in a TV interview aired on Thursday that he appointed Attorney General Jeff Sessions because he was "loyal." 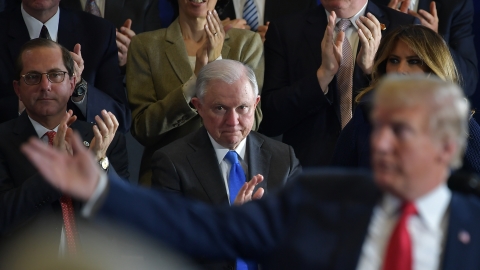 "The only reason I gave him the job is because I felt loyalty. He was an original supporter," Trump told Fox news anchor Ainsley Earhardt.

Trump's remarks came as part of an attack on Sessions' performance in the Justice Department.

" I put in an attorney general that never took control of the Justice Department, " Trump said, adding it's "an incredible thing".

Trump was also frustrated with Sessions' decision to recuse himself from the Russian probe, which saw the conviction of Trump's former campaign manager Paul Manafort and guilty plea of Trump's former lawyer Michael Cohen earlier this week.

"Sessions recused himself, which he shouldn't have done or he should have told me," Trump said, alleging that had Sessions told him his intention, he would not have appointed Sessions to the position.

Trump did not give clear answers to whether Sessions is in danger of being fired.

Sessions, an early supporter of Trump, was one of the first to be nominated by Trump to a key cabinet position. Despite fierce opposition, Sessions was able to clear the Senate with a thin majority.

After the Russian probe was launched against the Trump campaign, Sessions recused himself, leaving the reins to his deputy Rod Rosenstein, infuriating Trump.

Relationship between Sessions and Trump deteriorated in the following months, with Trump frequently bashing Sessions, prompting widespread rumor in Washington that Session may be heading toward an exit.