WORLD US authorization for KN95 models encouraging but not timely: insiders

US authorization for KN95 models encouraging but not timely: insiders 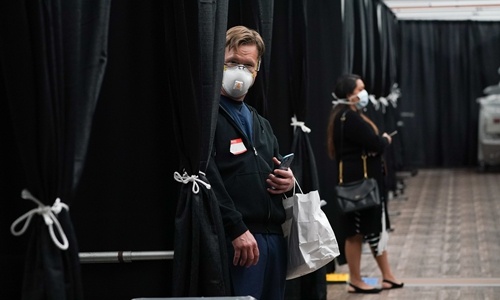 People wearing face masks stand in a temporary field hospital for COVID-19 patients under construction at the USTA Billie Jean King national tennis center in the Borough of Queens on Wednesday in New York. (Photo: AFP)

The US Food and Drug Administration (FDA) announced on Wednesday that it had issued emergency authorization for KN95 masks made by four Chinese companies according to Chinese standards to be exported to the US.

Industry insiders said that this is good for the US to assist prevention and control of the coronavirus pandemic, but the government's slowness means it will have to face longer shipping times and probably higher mask prices.

According to a document posted on the FDA's website on Wednesday, the administration issued an emergency use authorization (EUA) for non-NIOSH (National Institute for Occupational Safety and Health)-approved respirators made in China for the emergency use of the KN95 masks.

The N series of masks is an American standard and the KN series is a Chinese standard, but both types have very similar functions and offer a similar level of protection, said Chen Hongyan, secretary-general of the Medical Appliances Branch of the China Medical Pharmaceutical Material Association.

Chen added that the longstanding ban on KN95 mask exports to the US market reflects a pure distrust of Chinese products' standards by the US government, which only creates a huge barrier to protection work in the US.

Meanwhile, industry analysts believe that the slow reaction by the US government over mask imports has put the country in a position of great uncertainty as mask factories in China are now overloaded with orders from all around the world.

Cao Haochun, the founder of Weini Technology Development Co (Weini), based in Guangzhou, South China's Guangdong Province, told the Global Times that the US Centers for Disease Control and Prevention (CDC) is commissioning an American company to talk to them about exports, and there may be an 18-month contract for KN95 masks and other protective clothing to be signed.

"The US company is probably going to ask for 5 million to 10 million masks from us, which is the maximum amount that we can offer at the moment as we have already reached the limit of our production capacity," Cao said, adding that the US side is surely more anxious than Weini to get the contract signed as soon as possible.

"If we can't sign the contract in a short time, then we may not have any more production capacity for them, because other countries will buy it," Cao said, adding that the company is exporting to countries and regions worldwide, including 300,000 masks per day to the EU.

To meet growing demand, more than 700 employees have been working around the clock since the first day of the Chinese Spring Festival.

"We plan to add more than 1,000 workers and establish about 100 new production lines, but so far, we are at full capacity," Cao said, adding that costs have been growing like crazy, rising up to 20 times since the start of the outbreak due to shortages of raw materials.

Cao's company has been producing masks and clothing for over 20 years mostly for export markets, and it obtained the CE marking from the EU years ago. The masks shipped included KN95 and FP2 masks - the highest level of industrial and personal protection masks, Cao said.

Even though the company has enjoyed a good reputation for a long time in the industry, it still took time to obtain the export certificate from the US.

Chen said that as the pandemic in the US and Europe continues to spread, raw materials for mask-making face severe supply shortages and rising production costs.

The Global Times learned that the US has been indecisive prior to this EUA grant to Chinese companies.

The CDC said on its website on March 17 that the public can wear other national standard masks, including Chinese KN95 or KN100 masks, if supplies are insufficient. However, when the FDA published a list of EUA licensed masks covered under other countries' standards on March 24, Chinese masks were excluded, because of concerns about fraudulent masks, media reported.

In a bid to alleviate a national shortage of medical protective equipment, the FDA urgently approved non-N95 masks certified by the EU and five other countries, excluding China.

"We oppose the practice of distorting facts, shirking responsibility and politicizing the fight against the virus," Gao Feng, a spokesman for the Ministry of Commerce, told the press on Thursday. He also noted that China is ready to work with other countries and international organizations to deepen international cooperation.