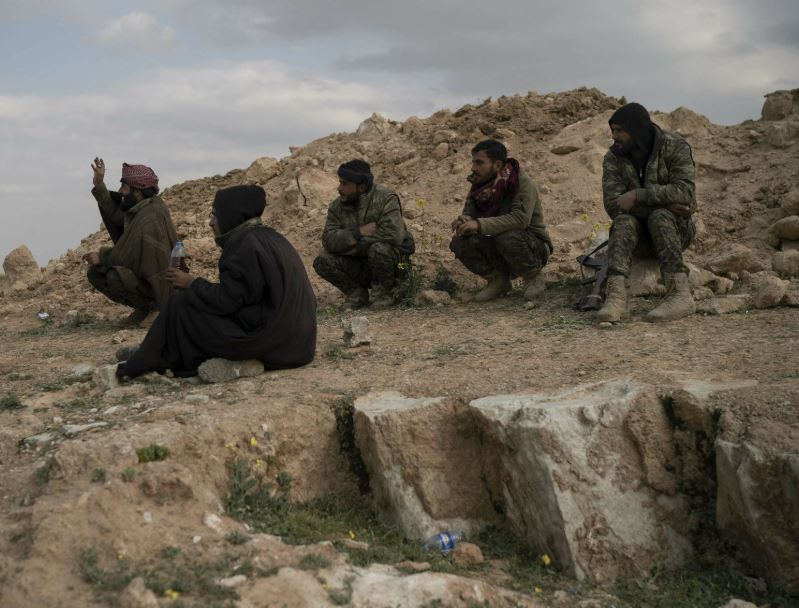 US-backed Syrian Democratic Forces (SDF) fighters sit atop a hill in the desert outside the village of Baghouz, Syria, Thursday, Feb. 14, 2019. (Photo: AP)

A US-backed force in Syria is closing in on Islamic State militants in a tiny area less than a square kilometer (square mile) in eastern Syria, and will soon declare the defeat of the militant group, a commander with the group said Saturday.

The capture of the last pocket still held by IS fighters in the village of Baghouz would mark the end of a devastating four-year global campaign to end the extremist group’s hold on territory in Syria and Iraq — their so-called “caliphate” that at the height of the group’s power in 2014 controlled nearly a third of both Iraq and Syria.

“We will very soon bring good news to the whole world,” said Ciya Furat, a commander with the Kurdish-led force known as the Syrian Democratic Forces, speaking at a news conference at the al-Omar Oil Field Base in the Deir el-Zour province.

President Donald Trump said the White House will make an announcement about Syria and the fight against IS by the end of Saturday.

“We have a lot of great announcements having to do with Syria and our success with the eradication of the caliphate and that will be announced over the next 24 hours,” Trump told journalists at the White House on Friday.

An Associated Press team in Baghouz Saturday, hundreds of meters away from the last speck of land where IS militants were holed up, saw several aircraft overhead and two airstrikes hit the area. SDF fighters said were fired by the US-led coalition.

The Syrian Democratic Forces declared the final push to capture the village a week ago after more than 20,000 civilians, many of them the wives and families of foreign fighters, were evacuated.

Since then, SDF commanders say they have been surprised to discover that there were hundreds more civilians in the enclave, after they were brought up by the militants from underground tunnels. Their presence has slowed down the SDF advance.

Furat, the SDF commander, said IS fighters are now besieged in an area that is about 700 square meters (840 square yards). He said that SDF fighters were able to liberate 10 of their colleagues that were held by IS.

“We are dealing with this small pocket with patience and caution. It is militarily fallen but civilians are used as human shields,” SDF spokesman Mustafa Bali told The Associated Press. Bali added that the SDF believes that IS gunmen are also holding previously kidnapped Syrians in the area.

Rami Abdurrahman, who heads the Britain-based Syrian Observatory for Human Rights, a war monitor, said SDF fighters are almost in full control of the area once controlled by extremists, adding that there might still be IS fighters hiding in a network of underground tunnels.

The Observatory said that some 200 IS gunmen surrendered Friday, days after about 240 others surrendered and were taken by SDF fighters and members of the US-led coalition.

“The defeat of Daesh will come within days,” Furat said, using the Arabic acronym to refer to the group. He added that after the physical defeat of IS, the SDF “will continue in its fight against Daesh sleepers cells.”

Despite the expected defeat on the ground, activists and residents say IS still has sleeper cells in Syria and Iraq and is laying the groundwork for an insurgency. The group has claimed responsibility in recent months for deadly attacks, mostly in Iraq, more than a year after the Iraqi government said the extremists have been defeated after losing the northern city of Mosul in 2017, the largest they held.