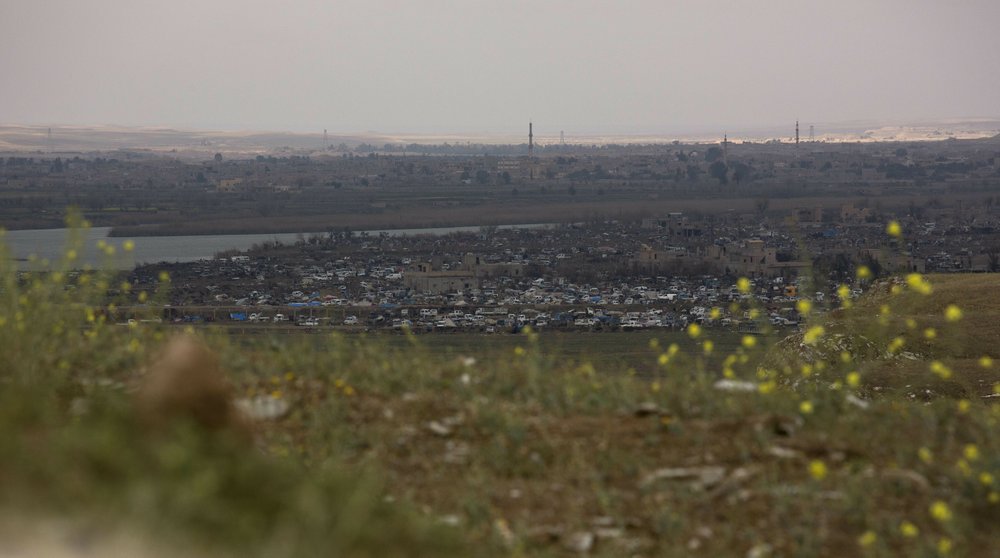 In this Sunday, March 17, 2019, photo, the Islamic State group's last pocket of territory in Baghouz, Syria, as seen from a distance. (Photo: AP)

US-backed Syrian fighters are searching tunnels a day after seizing most of the last pocket of land held by Islamic State militants, an official said Wednesday.

The long-running battle to retake the last outpost held by IS in eastern Syria appeared to have reached its conclusion, with no signs of battle Wednesday, although officials said a few remaining IS militants still had not surrendered.

Ciyager Amed, an official with the Kurdish-led Syrian Democratic Forces, said they were searching for any IS militants hiding in tunnels in a riverside pocket in the village of Baghouz. The SDF held back on announcing victory over IS.

Associated Press journalists saw SDF soldiers loading women and children into trailer trucks on the hilltop over Baghouz, in a sign evacuations were ongoing Wednesday. Black smoke could be seen rising from the village.

The SDF on Tuesday seized control of the encampment held by IS after hundreds of militants surrendered overnight, signaling the group’s collapse after months of stiff resistance. Fighters celebrated after months of grueling battles and an on-again off-again offensive that saw thousands of people, many of them women and children, evacuated from the pocket.

The militants have been putting up a desperate fight, their notorious propaganda machine working even on the brink of collapse.

The complete fall of Baghouz would mark the end of the Islamic State group’s self-declared caliphate, which at its height stretched across large parts of Syria and Iraq. For the past four years, US-led forces have waged a destructive campaign against the group. But even after Baghouz’s fall, IS maintains a scattered presence and sleeper cells that threaten a continuing insurgency.

The battle for Baghouz has dragged on for weeks and the encampment had proven a major battleground, with tents covering foxholes and underground tunnels.

The siege has also been slowed by the unexpectedly large number of civilians in Baghouz, most of them families of IS members. Over past weeks they have been flowing out, exhausted, hungry and often wounded. The sheer number who emerged — nearly 30,000 since early January, according to Kurdish officials — took the SDF by surprise.