WASHINGTON (AP) — The Biden administration on Wednesday joined calls for more sharing of the technology behind COVID-19 vaccines to help speed the end of the pandemic, a shift that puts the U.S. alongside many in the developing world who want rich countries to do more to get doses to the needy. 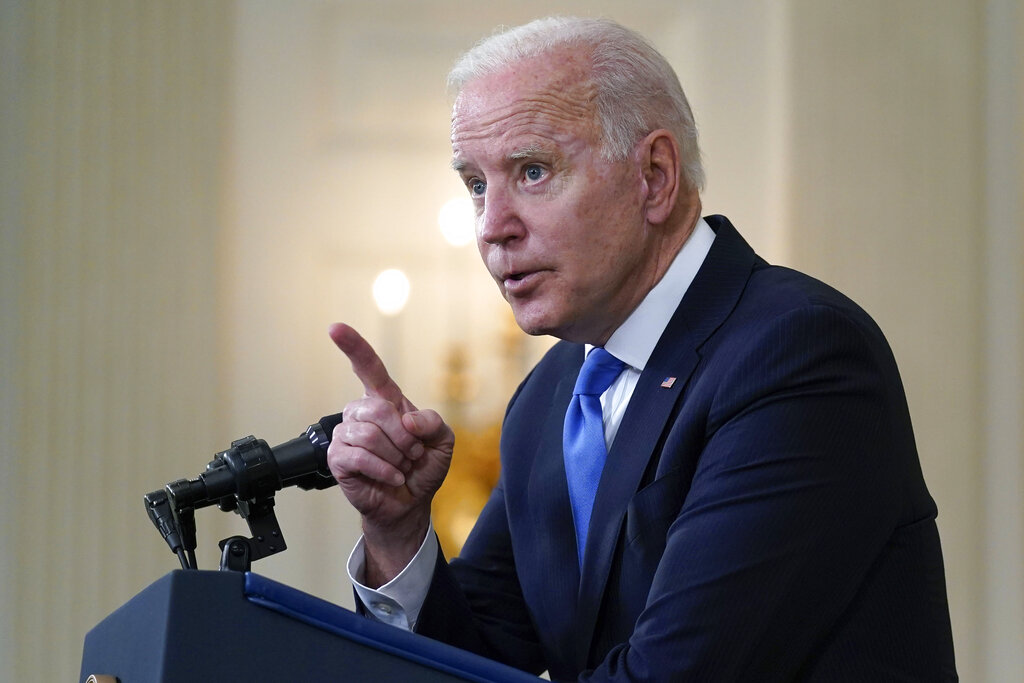 President Joe Biden gesturing as he takes questions from reporters as he speaks about the American Rescue Plan, in the State Dining Room of the White House, Wednesday, May 5, 2021, in Washington. (Photo: AP)

U.S. Trade Representative Katherine Tai announced the government's position, amid World Trade Organization talks about a possible temporary waiver of its protections that would allow more manufacturers to produce the life-saving vaccines.

“The Administration believes strongly in intellectual property protections, but in service of ending this pandemic, supports the waiver of those protections for COVID-19 vaccines," Tai said in a statement.

She cautioned that it would take time to reach the required global “consensus” to waive the protections under WTO rules, and U.S. officials said it would not have an immediate effect on the global supply of COVID-19 shots.

In a tweet, the director of the Africa Centres for Disease Control and Prevention, John N. Nkengasong, said the Africa CDC welcomed the waiver and called the decision “leadership in action.” He added: “History will remember this decision as a great act of humanity!”

Tai's announcement came hours after WTO Director-General Ngozi Okonjo-Iweala spoke to a closed-door meeting of ambassadors from developing and developed countries that have been wrangling over the issue, but agree on the need for wider access to COVID-19 treatments.

The WTO’s General Council took up the issue of a temporary waiver for intellectual property protections on COVID-19 vaccines and other tools, which South Africa and India first proposed in October. The idea has gained support among some progressive lawmakers in the West.

More than 100 countries have come out in support of the proposal, and a group of 110 members of Congress — all fellow Democrats of Biden — sent him a letter last month that called on him to support the waiver.

Opponents — especially from industry — say a waiver would be no panacea. They insist that production of coronavirus vaccines is complex and can’t be ramped up by easing intellectual property. They also say lifting protections could hurt future innovation.

Stephen Ubl, president and CEO of the Pharmaceutical Research and Manufacturers of America, said the U.S. decision “will sow confusion between public and private partners, further weaken already strained supply chains and foster the proliferation of counterfeit vaccines.”

Dr. Michelle McMurry-Heath, chief executive of the Biotechnology Innovation Organization trade group, said in a statement that the decision will undermine incentives to develop vaccines and treatments for future pandemics.

“Handing needy countries a recipe book without the ingredients, safeguards, and sizable workforce needed will not help people waiting for the vaccine," she said.

Pfizer declined to comment on Biden’s announcement, as did Johnson & Johnson, which developed a one-dose vaccine meant to ease vaccination campaigns in poor and rural areas. Moderna and AstraZeneca didn’t immediately respond to requests for comment.

The companies have made some efforts to provide vaccine doses to poor countries at prices well below what they’re charging wealthy nations.

For instance, Johnson & Johnson agreed last week to provide up to 220 million doses of its vaccine to the African Union’s 55 member states, starting in this year’s third quarter, and agreed in December to provide up to 500 million vaccines through 2022 for low-income countries via Gavi, The Vaccine Alliance.

Shares of Pfizer, AstraZeneca and Johnson & Johnson — huge companies with many lucrative products — fell less than 1% on the news. But Moderna, whose vaccine is the company’s only product, fell 6.2% in late-afternoon trading before gaining back two-thirds of a percent in after-hours trading.

It remained unclear how some countries in Europe, which have influential pharmaceutical industries and had previously shared U.S. reservations about the waiver, would respond.

WTO spokesman Keith Rockwell said a panel on intellectual property at the trade body was expected to take up the waiver proposal again at a “tentative” meeting later this month, before a formal meeting June 8-9. That means any final deal could be weeks away at best.

Authors of the proposal have been revising it in hopes of making it more palatable.

Okonjo-Iweala, in remarks posted on the WTO website, said it was “incumbent on us to move quickly to put the revised text on the table, but also to begin and undertake text-based negotiations.”

“I am firmly convinced that once we can sit down with an actual text in front of us, we shall find a pragmatic way forward” that is “acceptable to all sides,” she said.

Co-sponsors of the idea were shuttling between different diplomatic missions to make their case, according to a Geneva trade official who was not authorized to speak publicly on the matter. A deadlock persists, and opposing sides remain far apart, the official said.

The argument, part of a long-running debate about intellectual property protections, centers on lifting patents, copyrights and protections for industrial design and confidential information to help expand the production and deployment of vaccines during supply shortages. The aim is to suspend the rules for several years, just long enough to beat down the pandemic.

The issue has become more pressing with a surge in cases in India, the world’s second-most populous country and a key producer of vaccines — including one for COVID-19 that relies on technology from Oxford University and British-Swedish pharmaceutical maker AstraZeneca.

Michael Yee, a Jefferies Group biotech analyst, wrote to investors that the key access issues for developing countries aren’t patents or price, but an inadequate supply of the materials needed and the know-how to produce the vaccines and keep quality high — which one of Johnson & Johnson’s contract manufacturers in the U.S. failed to do, ruining millions of doses.

“Manufacturing supplies, raw materials, vials, stoppers, and other key materials are in limited supply for 2021,” and may still be next year and beyond, Yee wrote. That’s partly because it takes time to make all those components, and Moderna and Pfizer have commitments to buy them “from major suppliers in huge bulk over the foreseeable future.”

He added that Pfizer previously sought authorization to sell its vaccine to India, which rejected its application and asked that additional studies be run. The U.S., European Union and many other countries have given that emergency authorization.

Proponents, including WHO Director-General Tedros Adhanom Ghebreyesus, note that such waivers are part of the WTO toolbox and insist there’s no better time to use them than during the once-in-a-century pandemic that has taken 3.2 million lives, infected more than 437 million people and devastated economies, according to Johns Hopkins University.

“This is a monumental moment in the fight against COVID-19," Tedros said in Wednesday statement. He said the U.S. commitment "to support the waiver of IP protections on vaccines is a powerful example of American leadership to address global health challenges.”