WORLD US begins Covid-19 vaccinations as its death toll passes 300,000

US begins Covid-19 vaccinations as its death toll passes 300,000 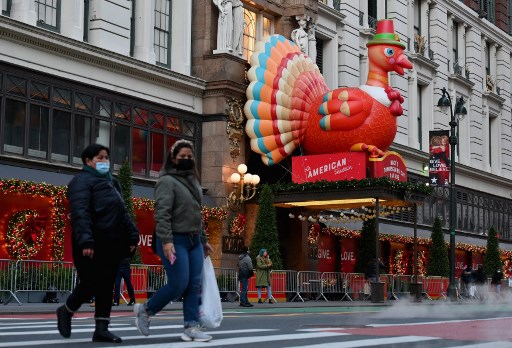 The United States kicked off a mass vaccination drive Monday hoping to turn the tide on the world's biggest coronavirus outbreak, as the nation's death toll passed a staggering 300,000.

The start of the desperately awaited vaccine program coincided with several European countries announcing new lockdowns amid spiraling infections, highlighting how the road to ending the global pandemic is still long.

"It didn't feel any different from taking any other vaccine," said Lindsay, a critical care nurse at the Long Island Jewish Medical Center, imploring all Americans to "to do our part" by getting vaccinated.

"I hope this marks the beginning of the end of the very painful time in our history," she added.

The vaccinations come at one of the darkest phases of the pandemic, with cases in the US and many other countries soaring, and health experts still struggling against vaccine skepticism, lockdown fatigue and uneven adherence to safety rules.

On Monday, the Netherlands was preparing to enter its strictest lockdown since the pandemic began, Britain announced new restrictions on London, and Turkey said it would go into a four-day lockdown over the New Year holidays.

The US -- which has the globe's highest death toll, and the largest number of reported cases at 16.3 million -- passed 300,000 deaths just hours after the vaccinations began, according to the Johns Hopkins University tally.

Vaccinations also took place in Pennsylvania and Ohio, while Canada administered its first dose to a caregiver in Montreal.

Delivery trucks with special refrigeration equipment are rolling out across America, as part of a public-private plan to ship millions of doses of the newly approved Pfizer-BioNtech vaccine to vulnerable Americans.

Courier services FedEx and UPS have deployed fleets of trucks and planes to carry their precious cargo -- sometimes under armed guard -- to all 50 states, where health care workers and nursing-home residents are first in line.