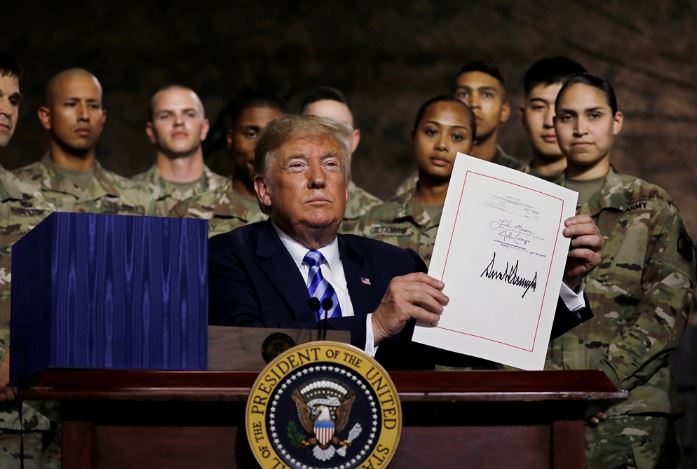 The spending plan for 2019 gives big increases to the US military which is now focusing more on what the White House calls “great power competition” – aiming specifically at China and Russia.

The bill takes specific aim at China in key areas. Here are some of the measures taking effect:

It prohibits China from Rim of the Pacific Naval exercises

It bans the US Defense Department using Huawei or ZTE equipment

Analysts say the change in emphasis towards China is striking.

“So, this is broad based, the suspicion of China and this sense of a threat from China. And, to me that’s a remarkable thing about this bill,” said Timothy Heath, Senior International/Defense Researcher at the Rand Corporation while speaking to CGTN from the corporation’s offices overlooking the Pentagon just outside Washington DC.

He added that the defense bill reflects a growing suspicion of China’s motives in the Pacific and beyond.

“It’s not simply authorizing more planes and ships to be built, which it does, but it also directs reporting requirements on issues on influence operations and espionage,” he said.

The US focus on China as a “strategic competitor” comes as the US armed forces are downgrading their fight against terrorism and focusing more on the Asia Pacific.

The US defense secretary visited his counterparts in China in June and stressed the need for cooperation, but not before criticizing Chinese actions at the Shangri-la Dialogue – a key regional security conference in Singapore

The US defense act bill also provides more money to forge closer defense relationships with other nations like India and Sri Lanka. This year saw the first visit of a US aircraft carrier to Vietnam since the end of the Vietnam War.

All over the Indo-Pacific – as the US now labels the region – the US is increasing its already overwhelming naval and air superiority.

China is not alone. The bill provides funding for an “active defense” against Russia, Iran and the DRPK. To enhance European security against Russia – the bill includes plans for a permanent US presence in neighboring Poland. And NATO ally, Turkey, will be denied access to the new F-35 fighter jet at least for now.

As part of the Pentagon’s focus on China, this defense act also adds another aircraft carrier to the US fleet. In total, 46 new ships are planned for the US Navy over the next five years.

It is worth emphasizing that in the US there is little political opposition for this $717-billion – the largest in the Pentagon’s history.

This year’s defense spending request made its way through the US Congress far quicker than usual.