US blocks DPRK air traffic revival ahead of Trump-Kim summit 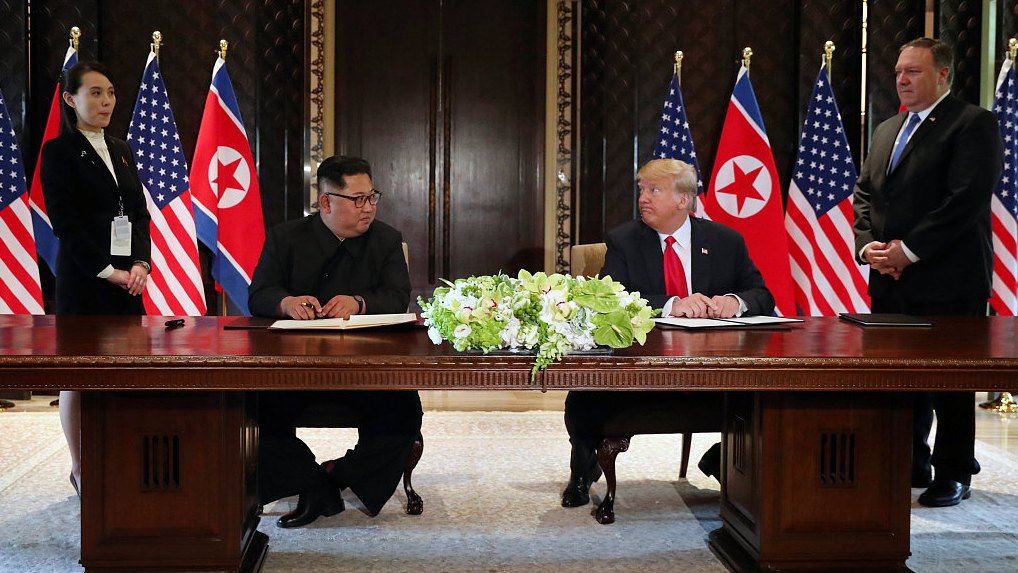 US President Donald Trump and DPRK leader Kim Jong Un sign documents that acknowledge the progress of the talks and pledge to keep momentum going, after their summit at the Capella Hotel on Sentosa island in Singapore, June 12, 2018. (Photo: CGTN)

The United States has blocked efforts by a UN agency to improve civil aviation in the DPRK at a time when Pyongyang is trying to reopen part of its airspace to foreign flights, three sources familiar with the matter told Reuters.

The US move is part of a negotiating tactic to maintain sanctions pressure on the DPRK, one of the sources said, ahead of a second summit between President Donald Trump and leader Kim Jong Un in Vietnam in late February.

Washington is seeking concrete commitments from Pyongyang at the summit to abandon its nuclear and missile programs.

The United Nations' International Civil Aviation Organization (ICAO), with 192 member countries, has been working with Pyongyang to open a new air route that would pass through the airspace of the DPRK and the Republic of Korea (ROK). 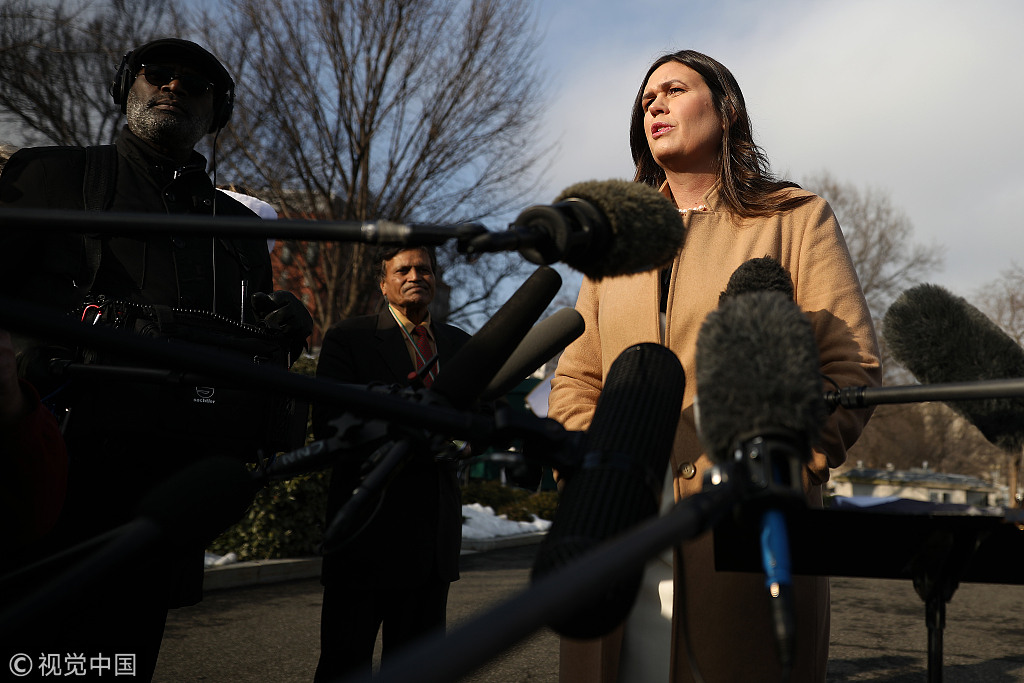 Airlines currently take indirect routings to avoid the DPRK due to the threat of unannounced missile launches, which have been witnessed by some passengers on commercial flights.

If the space was deemed safe, international airlines could save fuel and time on some routes between Asia and Europe and North America, and the DPRK could begin reviving its own commercial aviation industry.

The cash-strapped country has a population of more than 25 million but its economy has been squeezed by a series of sanctions for its nuclear and ballistic missile programs.

The DPRK also asked ICAO for access to US-produced aeronautical charts, they said.

But the United States discouraged the U.N. agency from helping the DPRK with its air program as Washington wanted to "pool all the leverages and incentives" until Pyongyang makes substantial progress on denuclearization, a third source said. 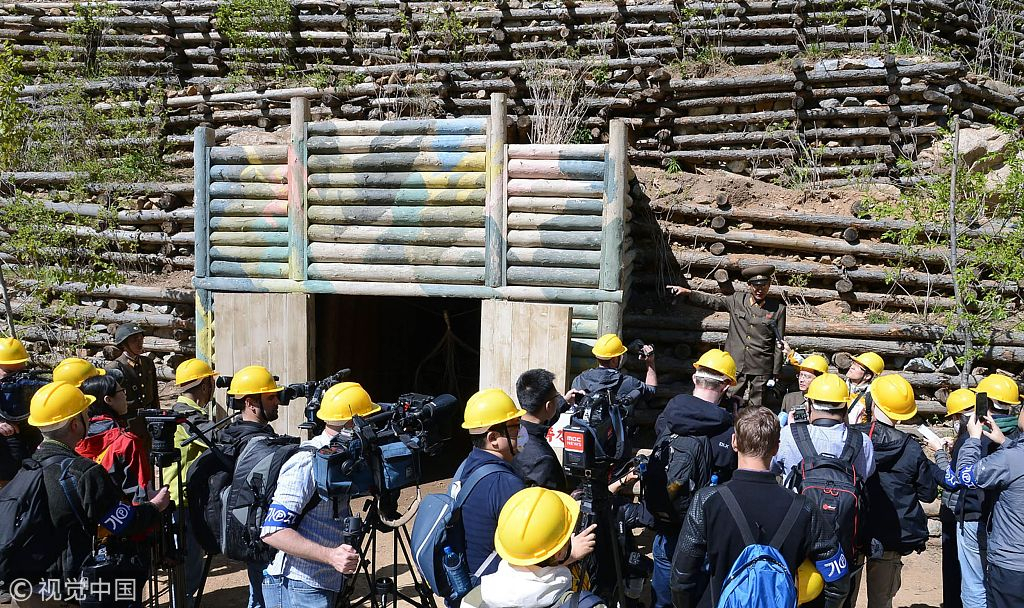 Journalists attend a demolition "ceremony" of the DPRK's Punggye-ri nuclear test facility in which the country declared it had "completely" dismantled its nuclear test site, May 24, 2018. (Photo: VCG)

"They would keep tight hold of all available leverage to make sure there is no loophole until the North Koreans (DPRK) take action that deserves a reward," the source said.

All sources spoke on condition of anonymity due to the sensitivity of the matter.

ICAO cannot impose binding rules on governments, but wields clout through its safety and security standards which are approved by its member states.

Asked for comment, a US State Department official said it does not publicly discuss details of diplomatic conversations. An ICAO spokesman did not immediately respond to a request for comment.

The DPRK mission to the United Nations in New York did not respond to a request for comment and there was no immediate reaction from the foreign ministry of the ROK.

In 2017, the United States proposed the U.N. Security Council freeze the assets of state-carrier Air Koryo, which flies to a handful of cities in China and Russia, as part of new sanctions on Pyongyang. The measure was dropped during negotiations between the 15 members. 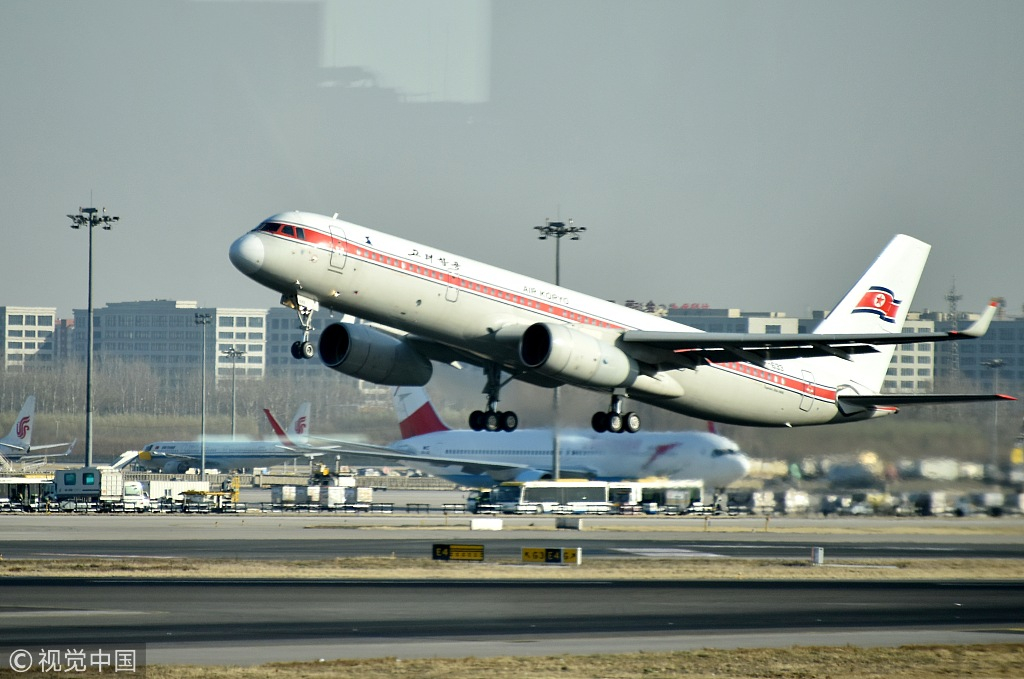 Airlines including Air Koryo and Air China Ltd. offer less than 200,000 available seats a year in the DPRK market, according to a January note from independent research firm CAPA Centre for Aviation.

That compares with over 13 million seats available in the ROK market, which has roughly double the population, CAPA said.

The biggest beneficiaries of lifting air restrictions over the DPRK would be ROK carriers including Korean Air Lines and Asiana Airlines Inc., according to CAPA.

The United States has doubled down on sanctions enforcement ahead of the planned second summit amid concerns Pyongyang is not committed to denuclearization, though Washington promised to relax some rules on humanitarian aid.

The DPRK dismantled its nuclear testing facility at Punggye-ri in front of the international media, May 24, 2018. (Photo: VCG)

The DPRK and ROK, meanwhile, have rapidly advanced relations, which prompted US officials to openly warn against moving too quickly without sufficient progress on denuclearization.

A fourth source told Reuters that the US move to facilitate humanitarian aid was intended to appease the ROK, facing some complaints that Washington is not willing to make any concessions.

"But they made it clear that there will be no relief of economic sanctions until they see substantial progress," said the source who also spoke on condition of anonymity due to the sensitivity of the issue.