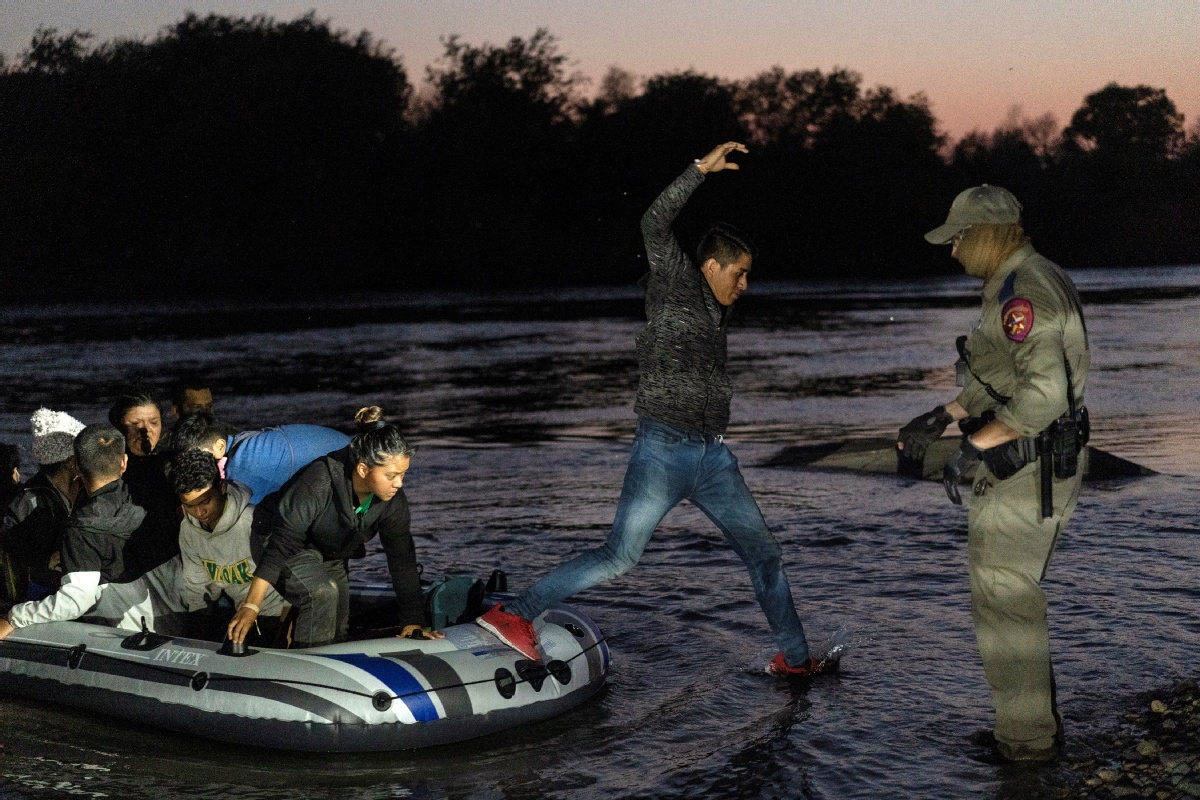 Asylum-seekers disembark from an inflatable raft after crossing the Rio Grande river into the United States from Mexico in Roma, Texas, on Thursday. (Photo: Agencies)

US Customs and Border Protection, or CBP, reported the number of unaccompanied children they detained crossing the border illegally, or trying to sneak through official entry ports, doubled in March from February to 18,890.

The number of migrants showing up as part of families with small children jumped from 20,000 in February to more than 53,000 in March.

In all, the total number of apprehensions along the 3,200-kilometer southern border was five times that of March 2020, a stunning rise officials and migrants say was sparked by increased poverty and violence in Central America as well as Biden's promise of a more humane policy toward immigrants.

Biden's critics characterize the situation as a "crisis" with the CBP, the Department of Health and Human Services, or HHS, and other agencies overwhelmed by the flood of migrants.

On Wednesday, a letter signed by 275 sheriffs from 39 states was sent to the president, calling for him to secure the border and stem the flow of people crossing the border.

"In all my 42 years here, I have never seen so many migrants risking their lives to cross the Rio Grande (river) as in the past couple of months," wrote Joe Frank Martinez, an elected Democratic sheriff in Val Verde County, Texas, in an opinion piece for the USA Today newspaper.

The county shares 180 km of border with the Mexican state of Coahuila.

Most of the migrants were from Mexico and the Central American countries of Honduras, El Salvador and Guatemala, many arriving in large groups, the authorities said.

"This is not new. ... Encounters have continued to increase since April 2020," acting CBP commissioner Troy Miller said in a statement.

The agency said nearly 104,000 of the border crossers were expelled back into Mexico, most of them single adults, under rules based on COVID-19 pandemic protections.

Reversing the policy of his predecessor Donald Trump, Biden is allowing unaccompanied children to stay and be united with relatives living inside the US.

The issue has posed one of the toughest headaches politically and socially for Biden.

Photographs and video footage show massively overcrowded shelters in the border region for the unaccompanied children.

As of Wednesday, there were more than 20,000 unaccompanied migrant children in government custody－4,228 in CBP hands, and 16,045 with HHS, which receives them from Border Patrol.

They have been arriving much faster than either agency has been able to process and resettle. HHS has set up holding facilities for the children on military bases, oil industry housing and other sites, and is searching for more capacity.

Biden has predicted a downturn in the coming months, but previous experience suggests the surge could continue until the border area weather gets very hot in May or June.

He stressed the long-term solution is to strengthen the economies and security in the countries most of the migrants hail from, and designated Vice President Kamala Harris to handle that part of the issue.

But Republicans accuse the administration of inaction.

"Five times the number of border crossings from last March, yet President Biden has no viable plan and VP Harris hasn't even visited the border," said Republican Senator Tom Cotton on Twitter.

"The Biden Border Crisis is getting worse each day."