LOS ANGELES, Aug. 5 (Xinhua) -- California hit another grim milestone in the COVID-19 pandemic as the most populous state in the United States officially reached 10 million confirmed cases, according to data released by the state health authorities on Friday. 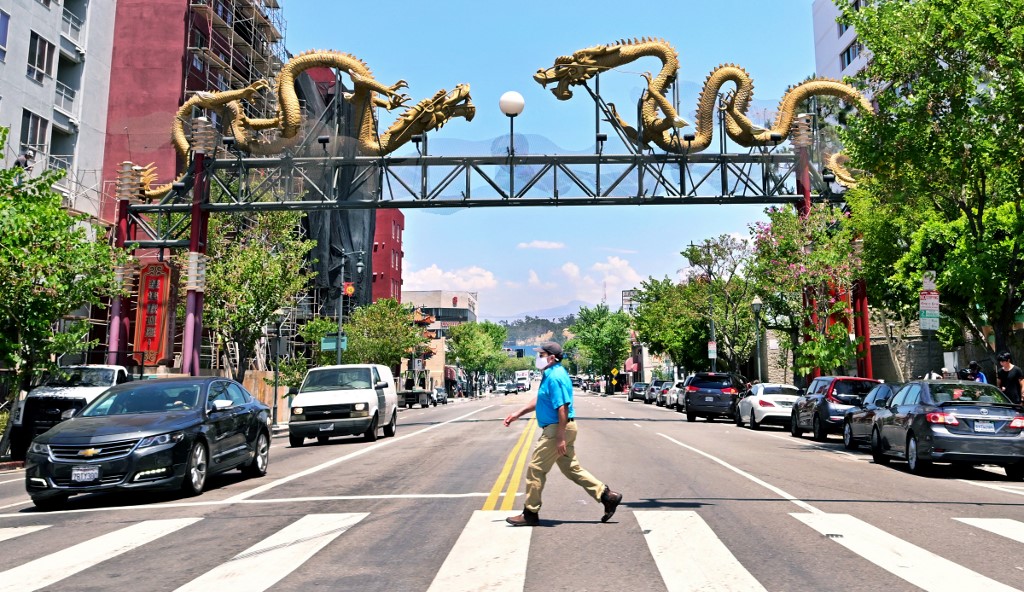 A pedestrian wears a facemask while crossing the street near the Chinatown Gateway Monument in Los Angeles, California on July 14, 2022. (Photo: AFP)

The Golden State, home to around 40 million residents, reported a total of 10,024,326 coronavirus infections to date, along with 93,056 related deaths, the California Department of Public Health said.

There are 4,435 people with COVID-19 currently hospitalized in the state, with 505 in intensive care units, said the department in a Friday update.

Around 79.9 percent of people in the state have been vaccinated with at least one COVID-19 dose, the update showed.

California, once an epicenter of the pandemic, became the first in the country to surpass 5 million coronavirus infections last December.

Statewide transmission numbers in California had been on a consistent climb, from one of the lowest points of the pandemic in early April until peaking in mid-July at one of the highest case rates of the health crisis, reported The Sacramento Bee, the largest newspaper in state capital.

The growth was fueled by subvariants of Omicron: BA.2 lineages at first, which dominated new cases throughout spring, followed by the BA.4 and BA.5 strains, which took over early this summer, said the report, adding that infection and hospital numbers have improved gradually in recent weeks.

With California suffering through another intense coronavirus wave, the stunning proliferation of the BA.5 subvariant is becoming a growing focus of scientific scrutiny, with experts saying it may replicate itself far more effectively than earlier versions of Omicron, the Los Angeles Times reported last month.

If BA.5 retains its position as the main dominant variant for a while, that could eventually stabilize the situation in California and eventually point to a situation where there will finally be a downturn in cases, Dr. Peter Chin-Hong, an infectious-diseases expert at University of California San Francisco, was quoted as saying by the biggest newspaper on U.S. West Coast.

People are "taking more risks; they're moving around; they're traveling," Chin-Hong told the newspaper, adding that "a number of people aren't wearing masks at places where it was once ubiquitous, meaning there's less peer pressure to wear a mask in areas where it was once commonplace."

"There's no question the state's official tally is increasingly considered an undercount with so many positive at-home test results going unreported. Still, perhaps our more-relaxed attitude for catching the latest immunity-evading, yet less-deadly variants of the virus are playing a part in how quickly the millions add up," said a report published Friday on the website of a California newspaper, the Monterey Herald.

Public health officials in Los Angeles, the most populous county in the state and the country, noted on Friday in a press release that the metropolitan area "remains at the high community level" and urged people to be fully vaccinated to increase protection against COVID-19.

Los Angeles County's Public Health Director Barbara Ferrer noted in a press release earlier this week, "As we continue to see improvements in our metrics, we still must do all we can to protect those who are most vulnerable, including the elderly, immunocompromised, and our essential workers."

"Given that transmission remains high, and the variant currently circulating is responsible for many reinfections, we encourage everyone to be cautious and layer in protections including testing before gathering, isolating away from others when infected or sick, and masking indoors," she added.

The county, home to over 10 million residents, backed off last week from reinstating an indoor mask mandate as COVID-19 infections and rates of hospitalizations stabilized.