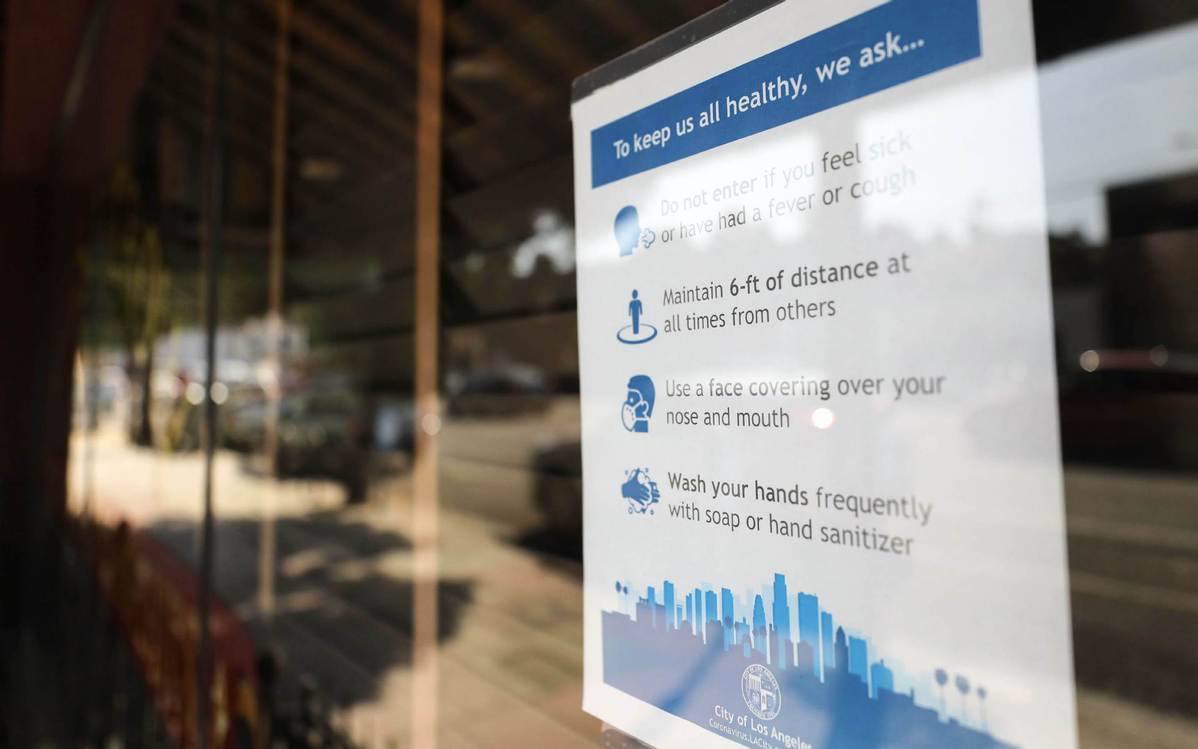 Safety guidelines for customers remain posted outside a shuttered bar along Sunset Boulevard amid the COVID-19 pandemic in Los Angeles, California, on June 29, 2020. [Photo/Agencies]

LOS ANGELES - In the face of an alarming spike in COVID-19 cases in California, the fast-approaching Independence Day holiday weekend has become a crucial test for citizens' ability to guard themselves against the deadly virus.

California, the most populous state in the United States, reported 5,898 new cases on Wednesday, raising the total confirmed cases to 232,657, and 110 new COVID-19-related deaths, among the state's highest daily counts, taking the death toll since the start of the pandemic to 6,090, according to the California Department of Public Health.

The soaring in patient counts has caused concern that new cases will overwhelm the local healthcare systems.

"California is seeing the virus spreading at alarming rates in many parts of the state, and we are taking immediate action to slow the spread of the virus in those areas," said Governor Gavin Newsom in a statement Wednesday.

Newsom has announced some stricter restrictions amid the spike of new cases and hospitalizations, ordering restaurants, wineries, movie theaters, family entertainment centers, zoos, museums and cardrooms in Los Angeles and other 18 counties to close indoor operations for a minimum of three weeks.

Thanks to its swift moves, California had been successful in curbing the spread of COVID-19 and had entered phased reopening of its businesses after two months of lockdown.

However, surprise inspections of restaurants and bars in the Los Angeles area revealed that safety protocols had repeatedly been breached, particularly amongst young people who felt less at risk from a virus that hits the elderly the hardest, resulting in more infections among young adults.

In all, Los Angeles County Health Department officials attributed the spike to unsafe practices in socializing at reopened businesses, and unprotected private and public gatherings.

"This shouldn't surprise anybody watching -- as you reopen the economy ... you're going to see people mixing that were not mixing in the past," said Newsom.

Particularly alarmed by a positive case rate in Imperial County that has shot up to 23 percent and is filling up their hospitals -- compared with Los Angeles's rate of 5.95 percen, the governor threatened to reinstate the stay-at-home order in their county if local officials could not curb the spread.

Health officials warned that a failure to wear masks and unsafe mixing with people from other households this holiday weekend could be an unmitigated disaster.

"Traditionally, the Fourth of July has been such a time for large gatherings and beach going. If those same practices occurred, we could be back with even a further spike upon our spike that we're having now," Dr. Robert Kim-Farley, medical epidemiologist and infectious diseases expert at the UCLA Fielding School of Public Health told the Los Angeles Times.

Director of the National Institute of Allergy and Infectious Diseases Dr. Anthony Fauci warned on Tuesday that the US COVID-19 strategy is "going in the wrong direction," and new cases nationwide could climb to 100,000 a day if American behaviors do not change.