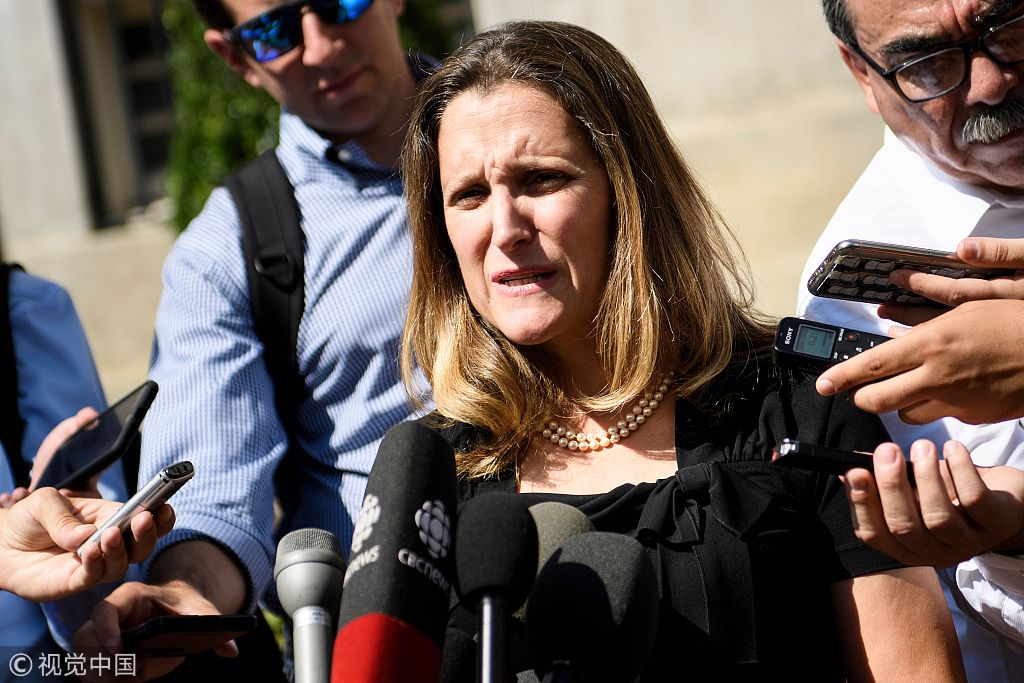 The US and Canada are making "good progress" on the revision of the continental free trade deal but talks will continue to resolve remaining issues, Canada's Foreign Minister Chrystia Freeland said Wednesday.

As the neighbors try to salvage the North American Free Trade Agreement as a three-country deal, Prime Minister Justin Trudeau warned he would stand firm on key issues as he questioned Donald Trump's respect for trade rules.

Amid the charged political atmosphere, dogged by Trump's repeated threats to leave Canada out of the revised NAFTA, Freeland said she believes "a deal that is good for Canada, good for the United States and good for Mexico is absolutely possible."

However, "The thing about trade negotiations is that nothing is done until everything is done," Freeland told reporters following a meeting with US Trade Representative Robert Lighthizer.

She said officials will meet late into the night to review additional issues, and the ministers will resume talks Thursday, noting that "all sides are committed to doing what it takes to get a good deal."

That was a notable change from Friday, when inflammatory comments from Trump angered officials in Ottawa and the discussions ended with no agreement on a rewrite of the 25-year-old trade deal.

Earlier on Wednesday, Trudeau once again stressed that he "will not sign an agreement that would be bad for Canada."

One of the key sticking points in the talks has been a dispute mechanism in Chapter 19 of NAFTA that provides binational panels to resolve disagreements. Canada has used the mechanism to fight off US anti-dumping duties.

Trudeau said this was a "red line" that Ottawa will insist on retaining to make sure NAFTA rules are enforced.

"We need to keep the Chapter 19 dispute resolution because that ensures that the rules are actually followed. I mean, we have a president who doesn't always follow the rules as they're laid out," Trudeau said in the interview.

Another issue is US complaints about Canada's strictly controlled dairy market, which Trump criticized again on Wednesday, blasting the tariffs that are as high as 300 percent.

Trade analysts say his complaints are misleading because the US exports far more dairy goods to Canada than it imports, and American producers do not actually pay the high tariffs because they only apply when imports are above the set quota.

But Trump told reporters that Canada "has walls up against us" and has been "taking advantage of the United States for many years," along with other countries.

He again called NAFTA a "foolish" and "stupid" trade deal that he was moving to fix.

Trump has threatened repeatedly to leave Canada on the sidelines and proceed with Mexico, which reached a deal with Washington last week and could sign NAFTA 2.0 as soon as November 30.

The White House notified Congress on Friday of its "intent to sign a trade agreement with Mexico -- and Canada, if it is willing -- 90 days from now."

The administration has until September 30 to present the full text of the new agreement to Congress, which gives Ottawa and Washington time to iron out remaining differences.

Trump continued his tough talk throughout the weekend, and was unlikely to be in a more cooperative mood after trade data released Wednesday showed the US deficit with Canada expanded, and deficits with China and the European Union hit new records.

"There is no political necessity to keep Canada in the new NAFTA deal. If we don't make a fair deal for the U.S. after decades of abuse, Canada will be out," Trump tweeted on Saturday.

"Congress should not interfere with these negotiations or I will simply terminate NAFTA entirely & we will be far better off."

But legislators and trade law experts have warned that Trump does not have the authority to supplant the three-nation NAFTA with a bilateral pact.

The US business sector strongly prefers that NAFTA remain a trilateral agreement.

"Anything other than a trilateral agreement won't win Congressional approval and would lose business support," warned Thomas Donohue, president of the US Chamber of Commerce.

Top photo: Canada's Foreign Minister Chrystia Freeland speaks with reporters as she arrives for a meeting at the US Trade Representative's office September 5, 2018 in Washington, DC. Freeland said she is looking forward to "constructive" discussions with US officials on the North American Free Trade Agreement. (Photo: VCG)