WORLD US, Canada to try to salvage three-country NAFTA

US, Canada to try to salvage three-country NAFTA 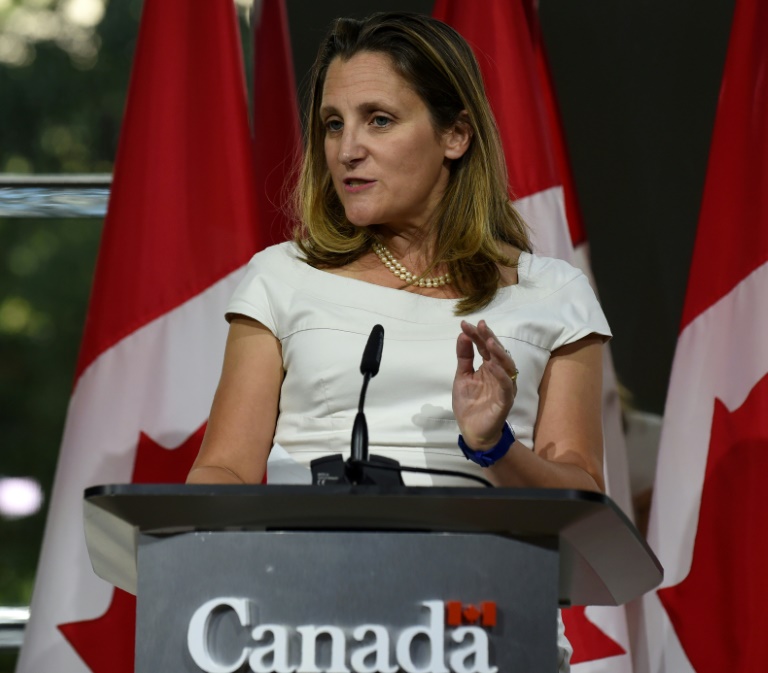 Foreign Minister Chrystia Freeland is due to return to Washington for talks with US officials (Photo: AFP)

Efforts to salvage the North American Free Trade Agreement as a three-country pact are due to resume Wednesday when Canada and the US sit down at the negotiating table in a politically charged atmosphere.

But the talks will be dogged by President Donald Trump's repeated threats to leave Canada on the sidelines and proceed with Mexico, which reached a deal with Washington last week and could sign NAFTA 2.0 as soon as November 30.

Amid rising optimism last week that an agreement would soon be finalized on a rewrite of the 25-year-old trade deal, inflammatory comments from Trump angered officials in Ottawa and the discussions ended Friday with no agreement.

And Trump continued his tough talk throughout the weekend.

"There is no political necessity to keep Canada in the new NAFTA deal. If we don't make a fair deal for the U.S. after decades of abuse, Canada will be out," he tweeted.

"Congress should not interfere with these negotiations or I will simply terminate NAFTA entirely & we will be far better off."

The White House notified Congress on Friday of its "intent to sign a trade agreement with Mexico -- and Canada, if it is willing -- 90 days from now."

The White House has until September 30 days before it must present the full text of the new agreement to Congress, which will give Ottawa and Washington time to iron out remaining differences.

Trilateral or no bilateral?

But legislators and trade law experts have warned that Trump does not have the authority to supplant the three-nation NAFTA with a bilateral pact with Canada.

Foreign Minister Chrystia Freeland is due to return to Washington for talks with US Trade Representative Robert Lighthizer on Wednesday morning.

Both officials said there had been progress in the negotiations last week, which frequently went late into the night.

But Prime Minister Justin Trudeau stressed Tuesday that no NAFTA is better than a bad deal for Canada, and he will insist on retaining the dispute mechanism in Chapter 19 that provides binational panels to resolve disagreements.

"We will hold firm on that," Trudeau said in Vancouver.

Canada has used the mechanism to fight off US antidumping duties.

After the US and Mexico reached an agreement on new rules for auto trade, and tougher protections for workers and intellectual property, talks with Canada were hung up on the mechanisms used to resolve disputes among partners, and on Ottawa's strictly controlled dairy sector.

Mexican officials stressed in a joint statement that they are "continuing to promote an agreement to which Canada is a party."

A Canada-less deal "is not the ideal scenario, but it's better than ending up without any agreement at all, it's better than living in uncertainty," said Gustavo de Hoyos, the president of the Mexican Employers' Association (COPARMEX).

But the US business sector strongly prefers NAFTA remain a trilateral agreement.

"Anything other than a trilateral agreement won't win Congressional approval and would lose business support," warned Thomas Donohue, president of the US Chamber of Commerce.

And in a rare show of common cause, AFL-CIO president Richard Trumka also supports a trilateral NAFTA.

He said it was "pretty hard to see" how efforts to revamp the pact would work "without having Canada in the deal."

Minutes later, Trump lashed out at the labor leader on Twitter for "poorly" representing his union and making comments that were "against the working men and women of our country, and the success of the U.S. itself."