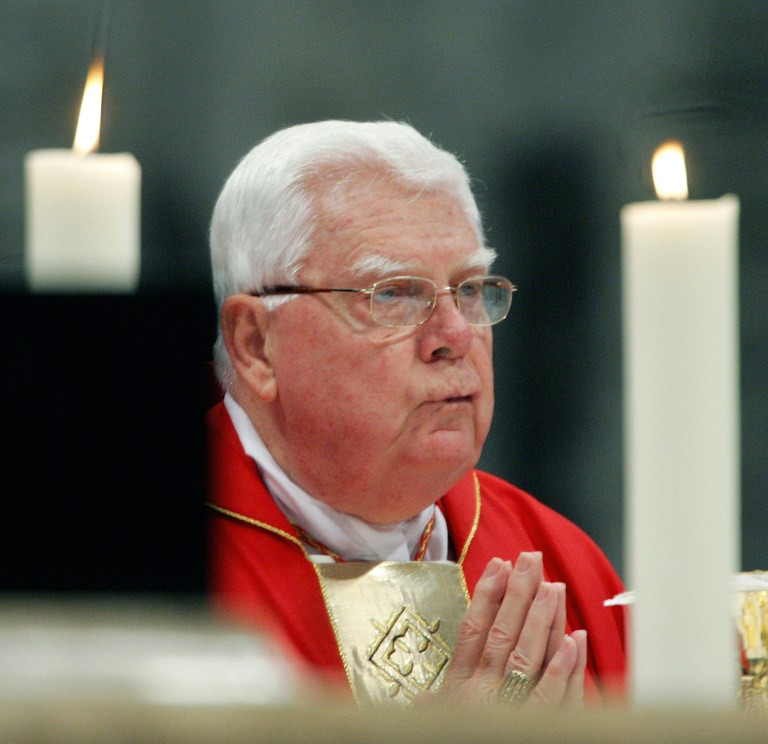 US Cardinal Bernard Law, a once-influential church figure forced to resign after failing to stop paedophile priests in one of the biggest crises in American Catholicism, has died, the Vatican said Wednesday. He was 86.

The former Boston cardinal had fallen from grace after he allegedly shielded priests involved in a wide-reaching sex abuse scandal that shook the Roman Catholic Church and eclipsed his long and at one-time venerated career.

Allegations of molestation and cover-ups seemingly surfaced daily after the scandal erupted in Boston, where Law was forced to resign in 2002 for allegedly protecting predator priests despite evidence they had been abusing youngsters.

The scandal was broken by the Boston Globe newspaper's Spotlight investigative reporting team, whose dogged uncovering of horrific widespread abuse by priests won a Pulitzer prize and was made into an Oscar-winning film, "Spotlight", in 2016.

Transferred in shame to a low-key position in a Rome basilica, Law had been recently hospitalised after a long illness.

He had become one of the main faces of a scandal that has dogged the church for decades -- and continues to do so.

Earlier this month the Australian Royal Commission into Institutional Responses to Child Sexual Abuse urged the church to bring in major reforms after the "serious failure" by Australia's institutions to protect its most vulnerable citizens.

The scandal there, which found many cases of abuse had taken place in Catholic-managed facilities, has embroiled Australia's most senior Catholic cleric George Pell, currently accused of multiple historical sexual offences.

In Law's case, he was accused of moving priest John Geoghan from parish to parish, despite knowing that Geoghan was believed to have abused up to 130 boys.

It later emerged that Law had also known of dozens of accusations against another priest, Paul Shanley, but had allowed him to continue working closely with children too.

The Spotlight reporters discovered the local Catholic hierarchy, led by Law, had systematically covered up sexual abuse by some 90 priests in and around Boston over several decades.

Born in Torreon, Mexico on November 4, 1931 to an Air Force colonel, Law grew up on military bases and went on to attend Harvard University, where he studied medieval history.

He began priesthood studies in 1953 and was ordained in Mississippi in 1961, becoming known nationally for his ecumenical work on social welfare and civil rights.

In 1984 the pope declared him archbishop of Boston -- at the time the third-largest diocese in the United States.

He remained faithful to the strict hierarchies of the Catholic church and was a staunch opponent of abortion and birth control, as well as the possibility of someday ordaining women or loosening traditional celibacy rules of the priesthood.

The abuse scandal has rocked the church from Ireland -- where one priest admitted sexually abusing more than 100 children -- to Germany.

Pope Francis has vowed to take a "zero tolerance" approach, but has been accused of being too soft on paedophiles, extending to them a general policy of mercy he is promoting in the church.

An abuse survivor who resigned from his sex-abuse advisory commission in March said elements within the Vatican tasked with protecting children were instead resisting change -- to the point even of defying Francis's orders.

In the latest controversy, Francis has been accused of allowing the commission to lapse, with the American National Catholic Reporter newspaper saying Tuesday that it points to the "causal negligence at the heart of the scandal".