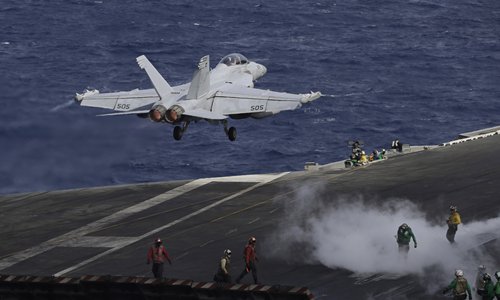 An F/A-18 Super Hornet fighter jet takes off on the deck of the US Navy USS Ronald Reagan in the South China Sea on Tuesday. China is allowing a US Navy aircraft carrier and its battle group to make a port call in Hong Kong Special Administrative Region after it turned down similar request in September. (Photo: AP)

With the approval of China, US Navy warships including the aircraft carrier USS Ronald Reagan arrived in China's Hong Kong Special Administrative Region (HKSAR) on Wednesday morning for a port visit.Chinese experts said on Wednesday that the approval is an olive branch from China in the hope of deepening mutual trust and an attempt to create a friendly atmosphere ahead of the G20 summit to be held in Argentina later this month.President Xi Jinping and US President Donald Trump are expected to hold talks during the G20 summit. The Reagan arrived in HKSAR at about 11:25 am, according to information provided by the Marine Department of the HKSAR government, which was released on Wednesday on its website. US destroyer USS Curtis Wilbur, USS Benfold and cruiser USS Chancellorsville were also expected to dock in Hong Kong, local news website hkcd.com reported Wednesday. Chinese military experts said that the warships will be resupplied and their crews will be given shore leave.Song Zhongping, a military expert and TV commentator, told the Global Times on Wednesday that allowing the US carrier and other warships to dock in HKSAR is a barometer indicating the state of relations between the two militaries. China turned down an application by the US amphibious assault ship Wasp to enter HKSAR in September amid trade frictions between the two countries and US sanctions against a Chinese military agency and its head for allegedly buying Russian fighter jets and a surface-to-air missile system, Reuters reported in September.The Reagan was allowed to visit HKSAR in October last year, hkcd.com said in the report.Li Haidong, a professor at the China Foreign Affairs University in Beijing, told the Global Times on Wednesday that allowing the US aircraft carrier and its support ships to dock in HKSAR signals China's willingness to seek an improvement in a wide range of ties between the two countries."Military relations are a crucial part to the overall ties between China and the US," Li said.Li said there are frictions and mistrust between the two sides, but leaders from the two countries are keeping communication channels open, which is helping ease tensions.Frequent military exchangesLieutenant General Tan Benhong, commander of the People's Liberation Army (PLA) Garrison in the HKSAR, was invited to board the Reagan on Tuesday to watch US fighter jets perform a takeoff and landing exercise as the aircraft carrier was sailing toward HKSAR, Hong Kong-based newspaper South China Morning Post reported on Tuesday.Li said this reflects the willingness of both sides to strengthen military communication and avoid possible misjudgments in the future.Last week, the PLA and US Army conducted a military exchange centering on humanitarian aid and disaster relief in Nanjing, East China's Jiangsu Province.Officers and experts said at the time that the operation would help boost mutual trust, making military ties a stabilizer of overall relations between the two countries.Talks and cooperation between militaries will lead to improved ties in general, Song said, noting that struggles and conflict will result in a lose-lose situation that would be bad for both sides.Friendly atmosphere The planned meeting later this month between Xi and Trump in Argentina will mark the first time they will sit down together since the start of the US-China trade frictions, Associated Press said on Tuesday.Song said that allowing US vessels to dock in HKSAR will also contribute to creating a sociable atmosphere for the two leaders to discuss political and trade issues.It will be quite challenging to establish a congenial atmosphere at the presidents' meeting considering the intensity and complexity of  trade spat between China and the US, said Li. It is relatively straightforward to use the countries' militaries as icebreakers, Li noted.