US cities remain locked in a grim spiral of record homicides

Several American cities, both large and small, have seen a record number of homicides this year, a deadly spiral born at the height of the Covid-19 pandemic last year and which the authorities are still struggling to control. 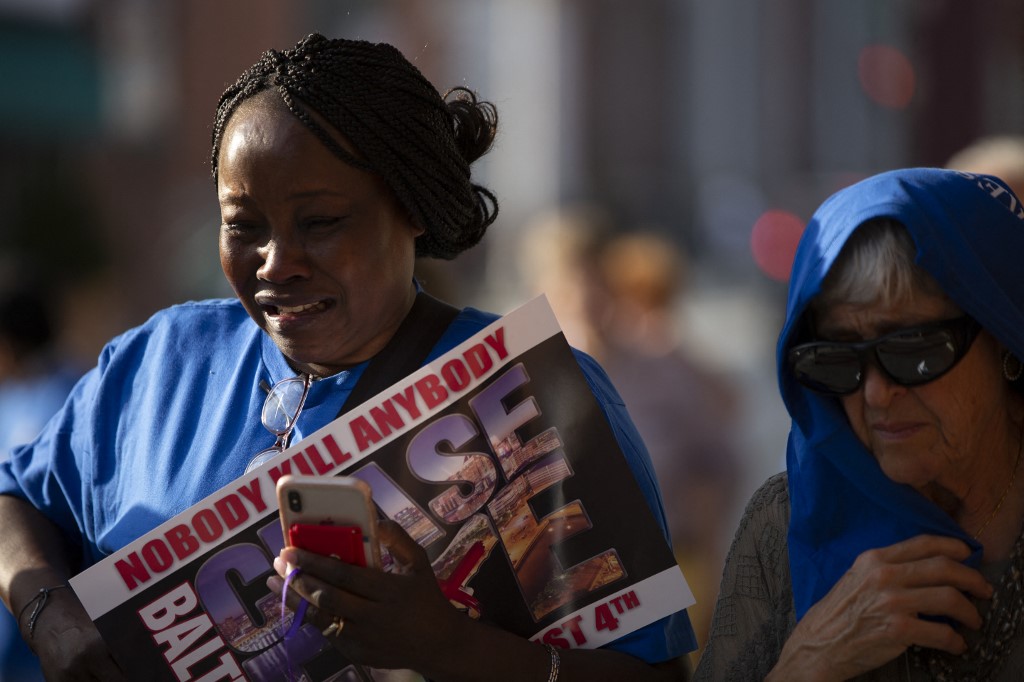 A woman cries during a Baltimore Ceasefire "peace walk" to push for a 72-hour weekend period without any homicides and commemorate victims of gun violence in Baltimore, Maryland, on August 2, 2019. (Photo: AFP)

A convergence of factors is to blame, according to experts interviewed by AFP: the painful reverberations of the coronavirus and of the varied traumas it triggered; an economic recovery that has left minority groups lagging far behind; and a record profusion of guns in the country.

Philadelphia has broken a gruesome record set in 1990 with at least 535 homicides this year in a population of 1.5 million. The "City of Brotherly Love" thus surpassed both New York and Los Angeles, the two largest US cities.

"In Philadelphia, like a lot of major cities, we are poor," said Dorothy Johnson-Speight, who heads the nonprofit group Mothers in Charge.

"We're talking about a poor educational system, housing issues, resources for families that need support... We have a very high rate of food insecurity."

After the death of her son -- killed at 24 in a pointless argument over a parking space -- she created the group in 2003 to fight against violence in this eastern city known as the cradle of American democracy.

Mothers in Charge, which organizes anger-management sessions and supports families of homicide victims, had to limit its activities for months due to the pandemic.

The absence of such support "kind of escalates anger," Johnson-Speight said. "When you don't have a place to go with it, or you don't know how to handle it and you're not getting support with it, yeah, it can be worse."

'No value for life'

The numbers are dramatic, in both big and medium-sized cities: the federal capital of Washington has seen at least 211 homicides, while smaller or medium-sized cities like Albuquerque, New Mexico (with 100), Portland, Oregon (at least 70) and Richmond, Virginia (80) have also set records.

"People are just angry. They're just off about everything. And with that frustration, their coping mechanisms seem to fail," he added.

Young people, particularly those of color, "have these beefs, they get mad at each other, and they play it out on Facebook, then it ends up in a shooting," said Thomas, who is African-American. "There's no respect, and there's no value for human life."

In the videos, young people see drill rappers "showing the different kinds of guns that are available" while playing aggressive music.

But for crime analyst Jeff Asher and for many other specialists, the leading cause of the surge in homicides is "the huge increase in gun sales" since the pandemic began.

Gun sales set a record in 2020, with nearly 23 million sold, according to the Small Arms Analytics & Forecasting consultancy, which expects a still-high figure of 20 million sales this year.

"Everybody has a gun," said Michael Pfleger, a Catholic priest and longtime anti-violence activist in Chicago.

"A gun now has become the first line of defense and offense to many people. The people on the street will tell you, 'You know, I gotta have a gun because everybody else does.'"

His city of Chicago, in the northern Midwest, has suffered for years from violence and corruption. This year it has already passed the grim mark of 800 homicides -- a record that had stood since 1994.

Most of the killings involve settling of scores between street rivals, and most victims are African American, often children struck by stray bullets.

Some American liberals have pushed a "defund the police" initiative aimed at transferring part of city budgets from law enforcement to social programs meant to address underlying causes of violence.

Pfleger thinks the push for defunding is not helpful.

Police do need to be more effective, the experts said, considering that fewer than 50 percent of the violent crimes reported to police were solved in 2020.

"Solving a higher percentage of murders would improve community trust and would also get murderers off the street," Asher, who is a former CIA agent, told AFP.

He also pointed to an "increasing distrust in police" -- particularly after the killing by a white policeman of George Floyd in May 2020 -- saying that it can "lead to people being more willing to take things into their own hands."

Father Pfleger thinks much more must be done to give people in poor urban neighborhoods alternatives to crime and violence.

"You can't just tell somebody to put down a gun and not give them anything to pick up," he said.