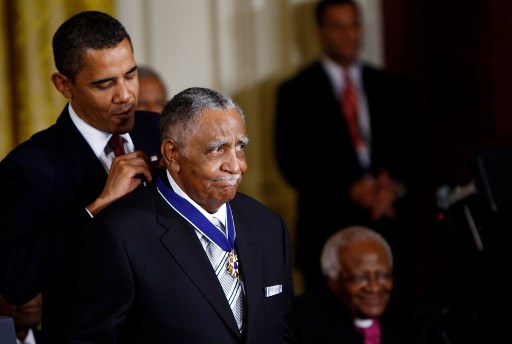 In this file photo former US President Barack Obama presents the Medal of Freedom to Reverend Joseph E. Lowery during a ceremony at the White House August 12, 2009 in Washington, DC. (Photo: AFP)

Lowery's death was confirmed by Imara Canady, a board member for the Joseph & Evelyn Lowery Institute, CNN said.

Born in 1921, Lowery worked closely alongside leading figures in the civil rights movement such as King and Jesse Jackson and helped found the Southern Christian Leadership Conference (SCLC), the civil rights group started by King.

He was chosen to speak at the inauguration of the country's first black president Barack Obama in 2009, and was later awarded the Medal of Freedom, the highest civilian award in the United States.

"He spoke up spoke out he never gave up. He marched and he protested all across America. We mourn his passing this evening," Lewis said.

"Tonight, the great Reverend Joseph E. Lowery transitioned from earth to eternity. Our thoughts and prayers are with his family," the King Center in Atlanta said in a tweet.

"He was a champion for civil rights, a challenger of injustice, a dear friend to the King family."