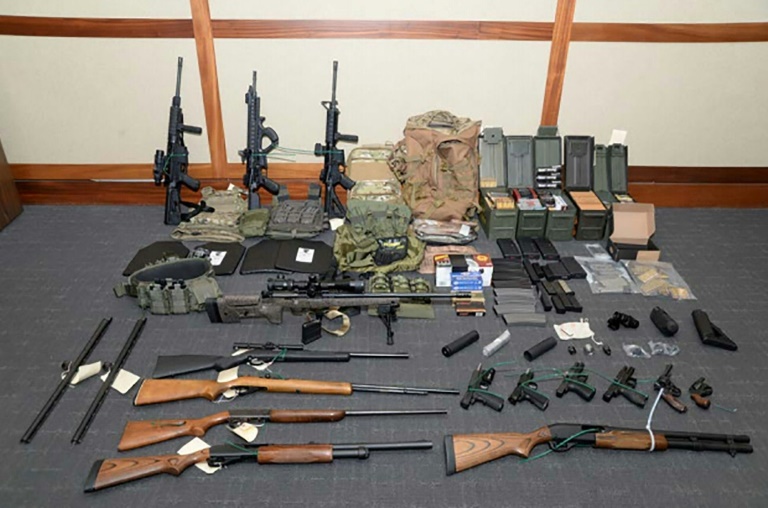 A US Coast Guard officer who espoused white supremacist views and drafted a target list of Democratic politicians and prominent media figures has been arrested on firearms and drug charges.

Christopher Paul Hasson, 49, an admirer of Norwegian mass murderer Anders Breivik, was arrested last week and a powerful arsenal seized from his home in a Washington suburb, according to court documents unsealed Wednesday.

"The defendant intends to murder innocent civilians on a scale rarely seen in this country," US District Attorney Robert Hur said in a motion seeking that Hasson be detained until trial.

"The defendant is a domestic terrorist, bent on committing acts dangerous to human life that are intended to affect governmental conduct," Hur said.

Hasson, who was arrested on Friday, is being held on drug charges and for unlawfully possessing firearms and ammunition.

The US Attorney's office said 15 guns and over 1,000 rounds of ammunition were recovered from Hasson's cramped basement apartment in Silver Spring, Maryland, along with illegal drugs, including steroids and human growth hormone.

Prosecutors said Hasson identified himself as a "White Nationalist for over 30 years and advocated for 'focused violence' in order to establish a white homeland."

Hasson routinely perused portions of the "Breivik manifesto" on amassing firearms and how to compile a list of targets, they said.

Among the documents seized, according to prosecutors, was a draft letter to an unidentified American neo-Nazi leader in which Hasson described himself as a "long time White Nationalist" and a "man of action."

Prosecutors said Hasson's internet searches included such queries as "most liberal senators," "where do most senators live in DC" and "are supreme court justices protected."

In a draft email, Hasson wrote that "Liberalist/globalist ideology is destroying traditional peoples esp white. No way to counteract without violence."

According to prosecutors, Hasson began obtaining his cache of firearms in 2017 and had also expressed a desire to obtain biological weapons.

Hasson, a lieutenant in the US Coast Guard, has been working at Coast Guard headquarters in Washington since 2016 as an acquisitions officer, according to prosecutors.

He served in the US Marine Corps from 1988-1993 and also spent two years in the US Army National Guard.

Hasson is to appear before a court in Greenbelt, Maryland, on Thursday.

Breivik, the Norwegian mass murderer, is serving a 21-year sentence for the July 2011 massacre of 77 people, most of them teenagers who were attending a youth camp.