WORLD US confirms duties for Canadian paper used in newsprint

US confirms duties for Canadian paper used in newsprint 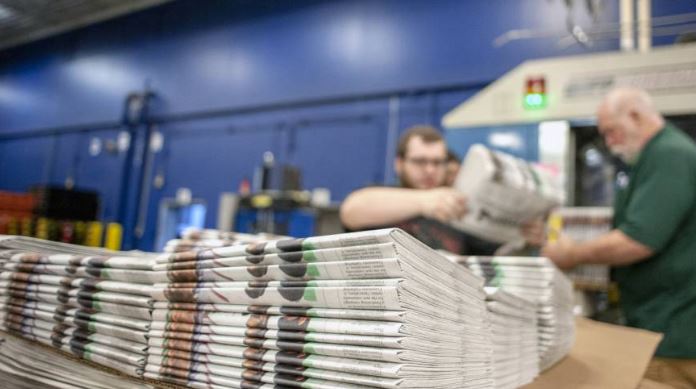 The US on Thursday announced final duties on imported uncoated groundwood paper from Canada that is used for newspapers, with slightly lower anti-dumping and anti-subsidy rates than previously levied.

The US Commerce Department set a final dumping rate of up to 16.88 percent and final anti-subsidy duties of up to 9.81 percent, it said in a statement.

Canadian Foreign Minister Chrystia Freeland said Ottawa was disappointed by the final duties. They could still be rejected by the US International Trade Commission, an independent body scheduled to rule in the case on September 17.

"The tariffs would be particularly hurtful for smaller communities, resulting in higher costs and even job losses at local newspapers and publications," Freeland said in a statement.

Tensions between the two neighbors are rising over the imposition of US duties. Since US President Donald Trump took office last year, Washington has acted against Canadian exports of newsprint, softwood lumber and steel and aluminum.

Some Canadian producers, including White Birch Paper, were exempted from duties. The highest anti-dumping rate of 16.88 percent was applied to Catalyst Paper Corp., while Resolute Forest Products Inc. was hit with the highest 9.81 percent anti-subsidy duties.

The orders cover about $1.21 billion in 2017 imports of uncoated groundwood paper from Canada, which is typically used for book publishing and printer paper, as well as newsprint.

The decision comes as the US, Canada and Mexico are trying to relaunch talks to update the North American Free Trade Agreement after Mexico elected a new president in July.

The US has demanded changes to NAFTA that allow it to more freely pursue anti-dumping and anti-subsidy cases against its northern and southern neighbors, such as those on ground-wood paper and softwood lumber.

US Commerce Secretary Wilbur Ross said the case was complicated but that the remedy targeted what he called bad actors.

"Today’s decisions are the culmination of an open and transparent process, which ensured a full and fair assessment of the specific facts of this case," he said in a statement.

Under current NAFTA rules, Canada can turn to an arbitration panel to seek a ruling against such duties.